WORLD Trump suggests France would have been defeated without US

Trump suggests France would have been defeated without US 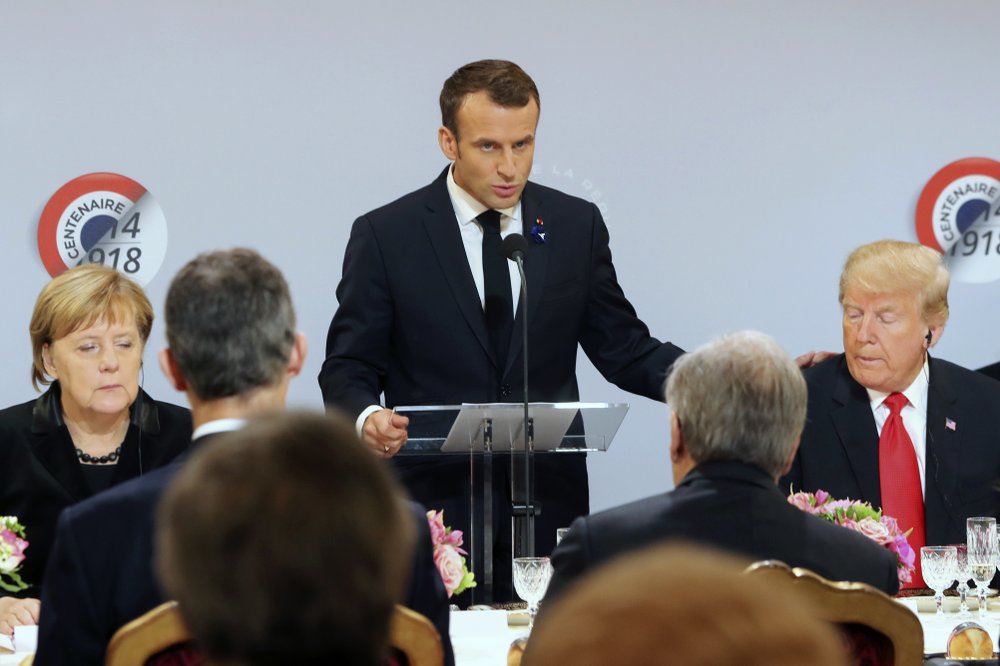 US President Donald Trump escalated his verbal assaults against France on Tuesday, suggesting that America’s stalwart European ally would have been vanquished in both world wars if not for the military firepower provided by the United States.

Trump tweeted about a suggestion by French President Emmanuel Macron that Europe build up its militaries because the continent can no longer depend on the US for defense. Macron had also said Europe needs to protect itself against cyberthreats from China, Russia and the US.

Macron’s comments were inaccurately reported and Trump continues to misrepresent them, seemingly for political hay. The French leader’s office said Trump had lumped together Macron’s remarks on protecting against cyber-threats and “interference in our democracies” from “China, Russia and even the United States” with Macron’s later statement on military defense.

“Macron suggests building its own army to protect Europe against the US, China and Russia,” Trump tweeted. “But it was Germany in World Wars One & Two - How did that work out for France? They were starting to learn German in Paris before the US came along. Pay for NATO or not!”

The president has long complained that NATO countries don’t pay their fair share of the defense alliance’s expenses, leaving the US to carry much of the burden. He criticized Macron before and after attending a weekend ceremony in Paris to commemorate 100 years since the end of World War I.

Trump and Macron discussed defense, trade and other issues when they met Saturday at the Elysee Palace.

A top adviser to Macron said Tuesday that the French position has been “clarified.” The official, who spoke on condition of anonymity in keeping with French customs, said Macron explained the European army issue to Trump, stressing that France was not making a choice between a European defense mechanism and multilateral organizations such as NATO.

Gerard Araud, France’s ambassador to the US, challenged Trump’s assertions. “For the sake of truth, Pres.@EmmanuelMacron didn’t say that EU needed an army “against the US”. It was an erroneous press report,” Araud tweeted.

Trump also complained Tuesday about tariffs on US wines sold in France, saying it’s “not fair, must change!” He also appeared to take a dig at Macron’s low public approval rating. Trump’s standing with the French is lower than Macron’s.

“On Trade, France makes excellent wine, but so does the US The problem is that France makes it very hard for the US to sell its wines into France, and charges big Tariffs, whereas the US makes it easy for French wines, and charges very small Tariffs. Not fair, must change!”

Nearly all US wine exports to major markets, including the European Union — of which France is a part — face tariffs, according to the Wine Institute, which represents California winemakers in Washington on matters of tax, trade and regulatory issues.

Trump, who built a career in business before he entered politics, opened a winery in Charlottesville, Virginia, in 2011.

“The problem is that Emmanuel suffers from a very low Approval Rating in France, 26%, and an unemployment rate of almost 10%. He was just trying to get onto another subject. By the way, there is no country more Nationalist than France, very proud people-and rightfully so! ... MAKE FRANCE GREAT AGAIN!”

Macron is hovering at around 30 percent in popularity polls, while the unemployment rate is just above 9 percent.

Trump appeared to be referring to Macron’s comment Sunday during a speech for the World War I centennial in which he decried the rise of nationalism across Europe and elsewhere, calling it a “betrayal of patriotism.” The comments were widely viewed as a rebuke of Trump, who sat stone-faced with other world leaders as Macron spoke and who embraces the “nationalist” label despite the negative connotations associated with the term.

Trump’s continued complaints about France and Macron struck a nerve with some in the European nation, especially since the latest broadsides came on the third anniversary of the Paris terror attacks that killed 130 people in 2015.

It prompted French journalist Hugo Clement to tweet in response: “We are already great, especially on november 13th. Go back to your room and give the phone to an adult.”

The complaints were also another marker of the up-and-down relationship Trump has had with Macron since they first met last year.

Trump also defended his decision to cancel a trip Saturday to the Aisne-Marne American Cemetery at Belleau Wood in Northern France after rainy weather grounded his helicopter. The White House later said that driving two-and-a-half hours to the cemetery would have required many Paris roadways to be closed on short notice to accommodate the president’s motorcade and that Trump didn’t want to cause that kind of disruption.

Trump did go ahead with a trip and speech in the rain Sunday at the Suresnes American Cemetery and Memorial just outside Paris.

“By the way, when the helicopter couldn’t fly to the first cemetery in France because of almost zero visibility, I suggested driving. Secret Service said NO, too far from airport & big Paris shutdown. Speech next day at American Cemetary in pouring rain! Little reported-Fake News!” he tweeted.