Hundreds of President Donald Trump's supporters staged a motorcade Monday near the protest-hit US city of Portland, where demonstrators, police and right-wing groups have clashed in months of anti-racism demonstrations. 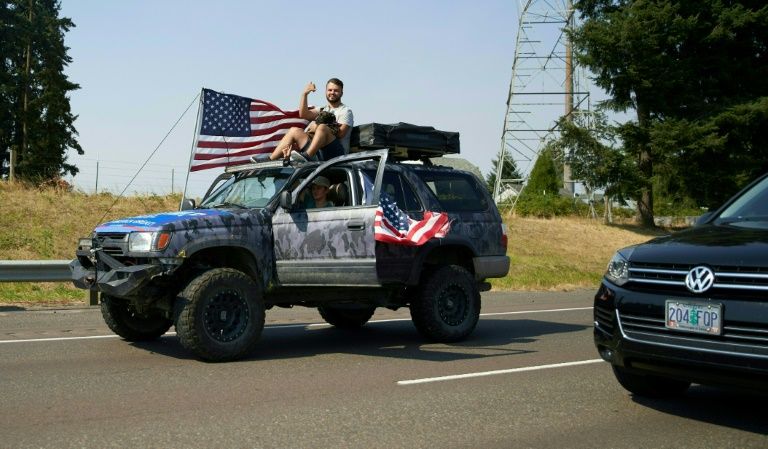 Groups of armed men in paramilitary gear were among the crowd that included families and older people before some 300 vehicles drove through Oregon City, a Portland suburb.

Oregon's largest city has seen over 100 days of protest including one stand-off late last month, in which a far-right activist was shot dead and the man suspected in the killing was later fatally shot as police moved in to arrest him.

Organizers of the "Oregon For Trump 2020" motorcade, held on the US public holiday of Labor Day, said they would not try to enter the city itself in order to "keep it safe."

The parade was decked out with US flags, Trump banners and the occasional sign that read, "Keep America first".

Carol Williams, a retiree volunteering for the Republican Party to register people to vote, said that after months of street protests "downtown Portland looks like a Third World country with all of the graffiti and the burning and the looting and all that and that's happening in cities all across the United States."

"We are peaceful. We don't go looking for retribution," she added.

The nightly protests were sparked by the death of George Floyd while in police custody in Minneapolis in May.

Floyd's death triggered similar protests nationwide, but it is in Portland -- a city of 650,000 that is more than 70 percent white -- that activists have remained on the streets practically every night, demanding racial justice and police accountability.

President Donald Trump has cast the city as being under siege by "thugs" engaged in "domestic terrorism," though the demonstrations have been peaceful for the most part.

Art White, a Vietnam veteran from Portland said he came to support his president, adding he felt he needed to stand up for his country.

"It makes me sad that I have to fight in my own country," he added.