White House senior staff discuss the situation as U.S. President Donald Trump sits in his car after being grounded from an attempt to visit the Demilitarized Zone (DMZ) in the truce village of Panmunjom dividing North Korea and South Korea, at a U.S. military post in Seoul, South Korea, November 8, 2017.（Photo:VCG）

A surprise visit by President Donald Trump to the heavily fortified Korean demilitarized zone was thwarted by bad weather Wednesday. The aborted trip came a day after Trump modulated his aggressive rhetoric and urged North Korea to come to the negotiating table.

Trump had been scheduled to make the unannounced early-morning trip to the DMZ amid heightened tensions between the United States and North Korea over Pyongyang's nuclear program.

Marine One left Seoul at daybreak and flew most of the way to the DMZ — but was forced to turn back due to poor weather conditions. Weather reports from near the heavily fortified border showed misting conditions and visibility below one mile. Pilots could not see the other helicopters in the air, according to White House officials.

White House Press Secretary Sarah Huckabee Sanders said the president was disappointed he couldn't make the trip. "I think he's pretty frustrated," she told reporters traveling with the president. She said the military and the U.S. Secret Service had deemed that landing would not be safe.

Trump had been scheduled to make the visit with South Korean president Moon Jae-in, who traveled separately and landed about a 20-minute drive from the DMZ.

A White House official had earlier ruled out the DMZ trip for Trump, claiming the president didn't have time on his schedule and that DMZ visits have become "a little bit of a cliché." 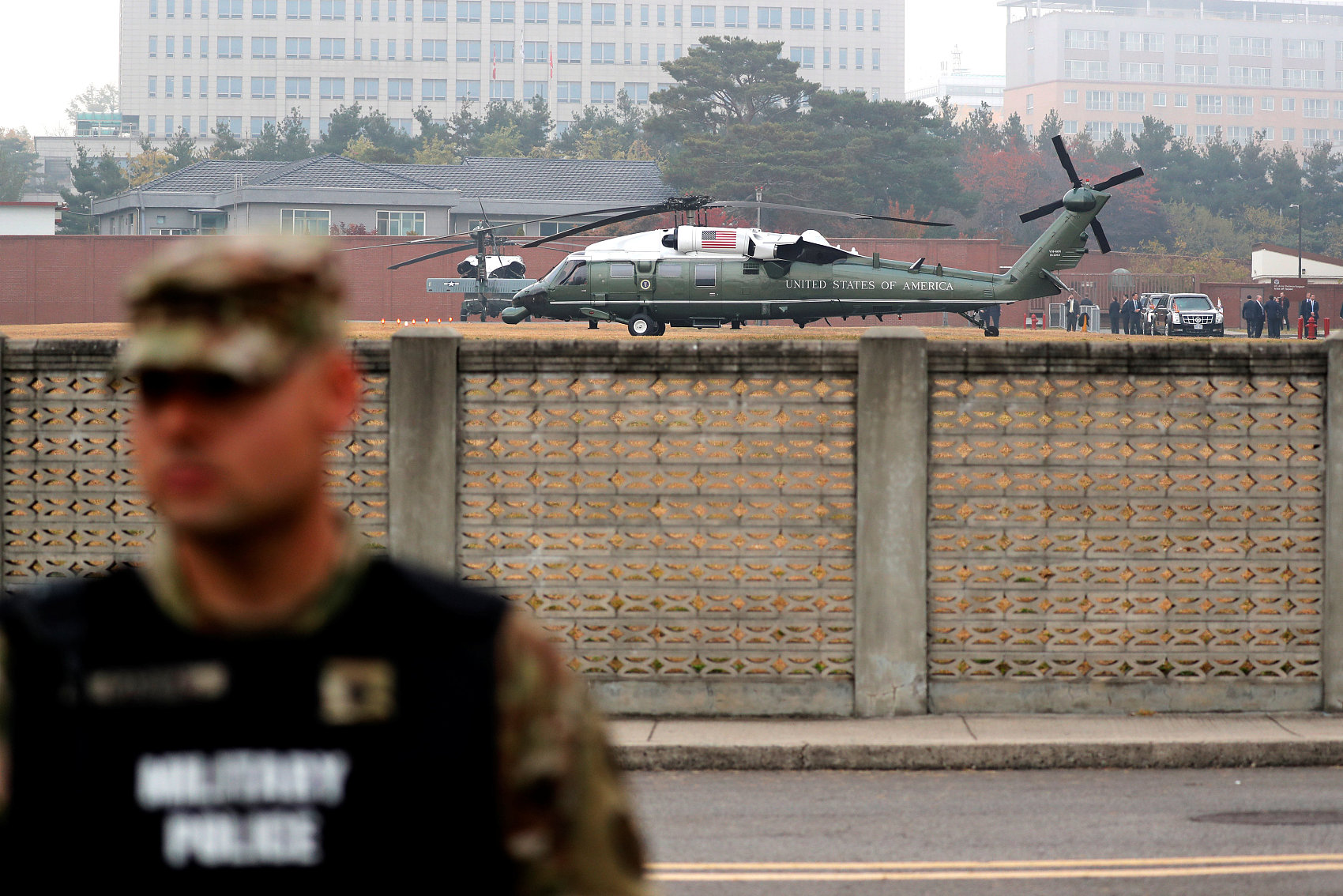 But Sanders said the visit had been planned well before Trump's departure for Asia. The trip was kept secret, Sanders said, for security reasons.

Trump was scheduled to address the South Korean National Assembly before closing out his two-day visit to the nation and moving on to his next stop in Beijing.

Visiting the border that has separated the North and South for 64 years has become something of a ritual for U.S. presidents trying to demonstrate their resolve against North Korea's ever-escalating aggression. Every American president since Ronald Reagan, save for George H.W. Bush, has made the trip, peering across the barren north through binoculars, hearing broadcast propaganda, and reaffirming their commitment to standing with the South.

The attempted visit was scheduled for a day after Trump made a striking shift in tone for a president, who for months has issued increasingly dire threats to answer any hostile North Korean action with "fire and fury." In a recent speech at the United Nations, Trump said he would "totally destroy" the nation, if necessary, and has derided Kim as "little Rocket Man."

But on Tuesday, his first day on the Korean Peninsula as president, Trump said he'd seen "a lot of progress" in dealing with Pyongyang, though he stopped short of saying whether he wanted direct diplomatic talks.

"It makes sense for North Korea to come to the table and make a deal that is good for the people of North Korea and for the world," Trump said at a news conference with Moon. "I do see certain movement." He also sounded an optimistic note on disagreements with the North, saying confidently, if vaguely: "Ultimately, it'll all work out."

Ever the showman, Trump had teased that he had a surprise in store, saying at a Tuesday evening banquet that he had an "exciting day" planned — "for many reasons that people will find out." He did not elaborate on what turned out to be the aborted trip to the DMZ.

North Korea has fired off more than a dozen missiles this year but none in nearly two months. Analysts caution against reading too much into the pause.

There's no public sign of any diplomatic progress between Washington and Pyongyang. U.S. officials say the back channel between the State Department and the North Korean mission at the United Nations in New York remains intact, but contacts have not been substantive other than achieving the release of American college student Otto Warmbier in June. He died days after his repatriation to the U.S. 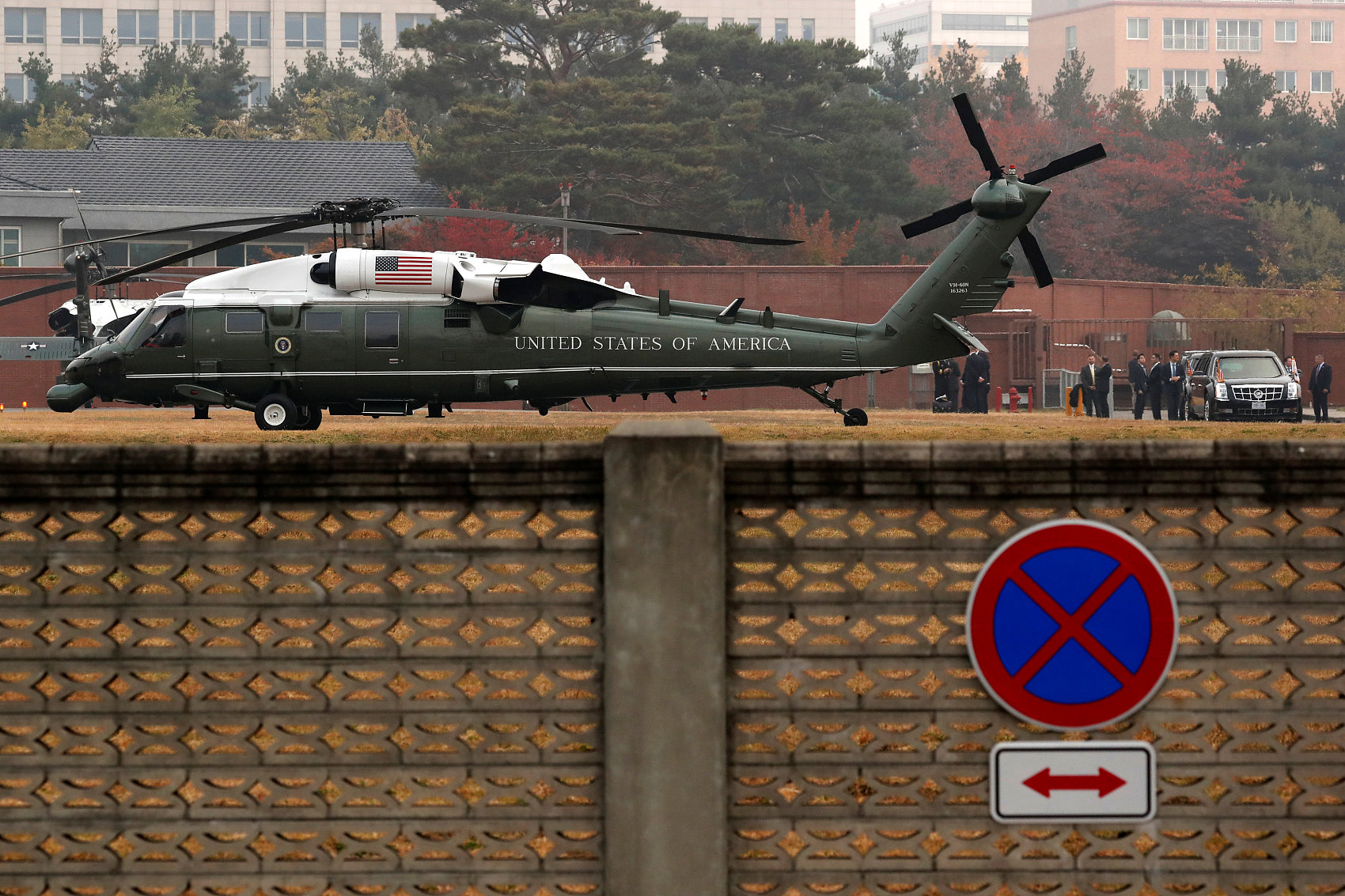 Still, Trump's conciliatory comments would be welcome in South Korea, where both the government and the wider population have been unnerved by the president's threats against the North.

Trump did note the United States' military options, mentioning that three aircraft carrier groups and a nuclear submarine had been deployed to the region. But he added that "we hope to God we never have to use" the arsenal. And he accused Kim of "threatening millions and millions of lives, so needlessly."

Moon, who has been eager to solidify a friendship with Trump, said he hoped the president's visit would be a turning point in the standoff with North Korea.

Visiting the wooded, craggy terrain inside the DMZ is like going back in time to 1953. In July of that year, the Korean War armistice agreement was signed at Panmunjom, the so-called "truce village" bisected by a marker that is the official dividing line between the North and South.