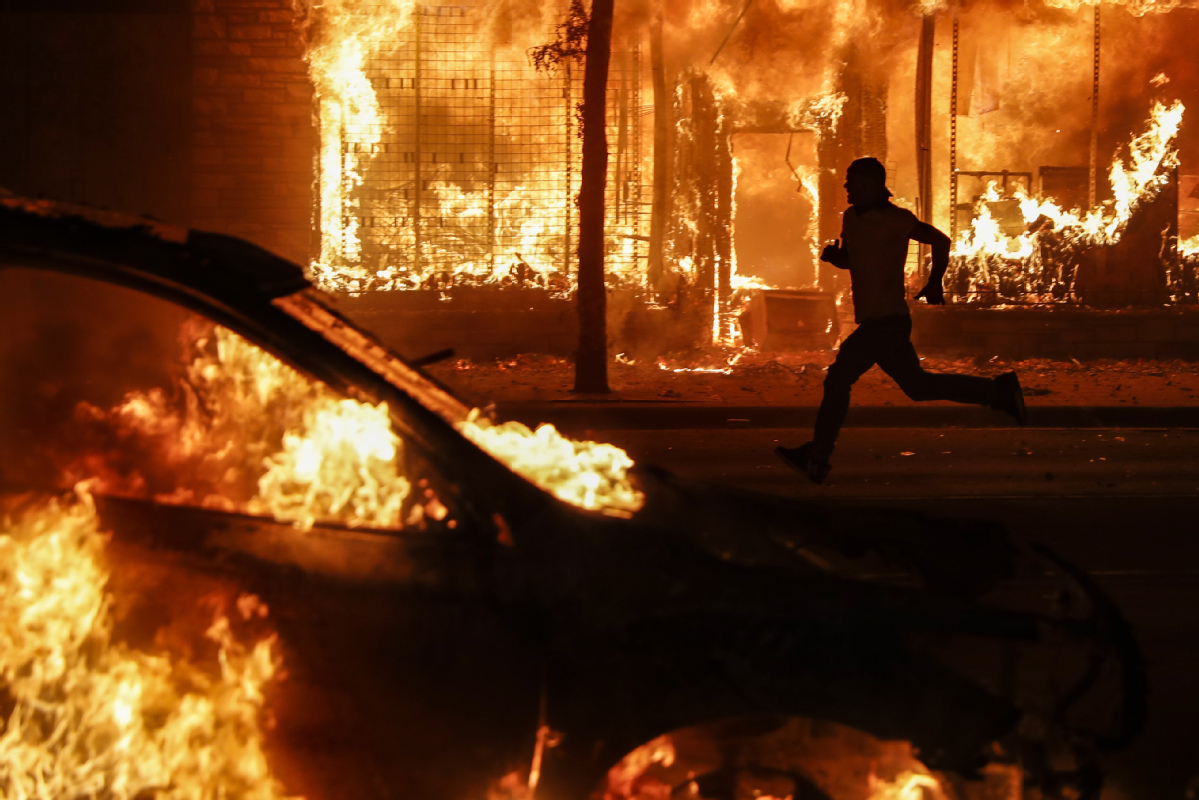 A protester runs past burning cars and buildings on Chicago Avenue, in Minnesota on Saturday. Protests continued following the death of George Floyd, who died after being restrained by Minneapolis police officers on Memorial Day. (Photo: AFP)

His predecessor called for justice to be done and a "new normal" that rids institutions and hearts of bigotry and unequal treatment.

However, Donald Trump, the current occupant of the White House, took a much more controversial line as protests broke out across the United States for the fourth consecutive night on Saturday over the death of George Floyd, a black man, in Minneapolis, Minnesota.

Floyd died when a white police officer used his knee to pin him down on the ground for almost nine minutes after taking him into custody. The incident was caught on multiple cameras and Floyd could be heard pleading with the officer, saying, "I can't breathe." The officer, Derek Chauvin, has been charged with third-degree murder and manslaughter.

Trump took to Twitter just before 1 am on Friday with tweets that called the protesters in Minneapolis thugs and said: "When the looting starts, the shooting starts."

Trump also threatened to deploy the National Guard to the city after explosive protests erupted there and in several cities.

Trump's looting and shooting tweet was a phrase a Miami police chief used in 1967 about crackdowns on black neighborhoods during times of unrest.

On Friday night people protesting against Floyd's death and Trump's shooting and looting comment gathered outside the White House. Some threw bricks and bottles at Secret Service and US Park Police officers, who responded with pepper spray.

Trump praised the Secret Service for being "very cool" and "very professional" but assailed the Democratic mayor of Washington for not providing city police officers to help.

"Big crowd, professionally organized, but nobody came close to breaching the fence," Trump wrote on Twitter. "If they had they would have been greeted with the most vicious dogs, and most ominous weapons, I have ever seen. That's when people would have been really badly hurt, at least. Many Secret Service agents just waiting for action."

On Friday night former president Barack Obama issued a statement on Twitter in which he said:

"It will fall mainly on the officials of Minnesota to ensure that the circumstances surrounding George Floyd's death are investigated thoroughly and that justice is ultimately done. But it falls on all of us, regardless of our race or station-including the majority of men and women in law enforcement who take pride in doing their tough job the right way, every day-to work together to create a 'new normal' in which the legacy of bigotry and unequal treatment no longer infects our institutions or our hearts."

And Joe Biden, vice-president under Obama, and who is the presumptive Democratic candidate to challenge Trump in November, said in remarks from his home in Delaware that were live-streamed later on Friday that he had spoken with Floyd's family.

He called Floyd's death "an act of brutality" that was just the latest in a series of injustices stemming from racism against black people, which Biden said was the "original sin" of the United States, which "still stains" the nation.

On Saturday Trump urged voters in Minnesota to expel Democrats. In a series of tweets and then comments to reporters, he blamed Democrats for the unrest and called on "Liberal Governors and Mayors" to get "MUCH tougher" on the crowds, and he threatened to intervene with "the unlimited power of our Military".

In one tweet, he called demonstrators who gathered at the White House "professionally managed so-called 'protesters'".

On Saturday, on the South Lawn of the White House as he was departing for Florida, Trump told reporters that officials in Minneapolis "have to get tougher, and by being tougher they will be honoring his (Floyd's) memory," adding: "When I saw the policemen running out of a police station (in Minneapolis on Friday night) for that police station to be abandoned and taken over, I've never seen anything so horrible and stupid in my life.

"We have our military ready, willing and able if they ever want to call our military. We could have troops on the ground very quickly. They're using their National Guard right now, as you know."

There were protesters that needed to be taught that they "can't do this", he said.