Donald Trump announced Friday that his budget director Mick Mulvaney will step in as acting chief of staff to replace John Kelly -- amid indications the president is struggling to fill the key post. 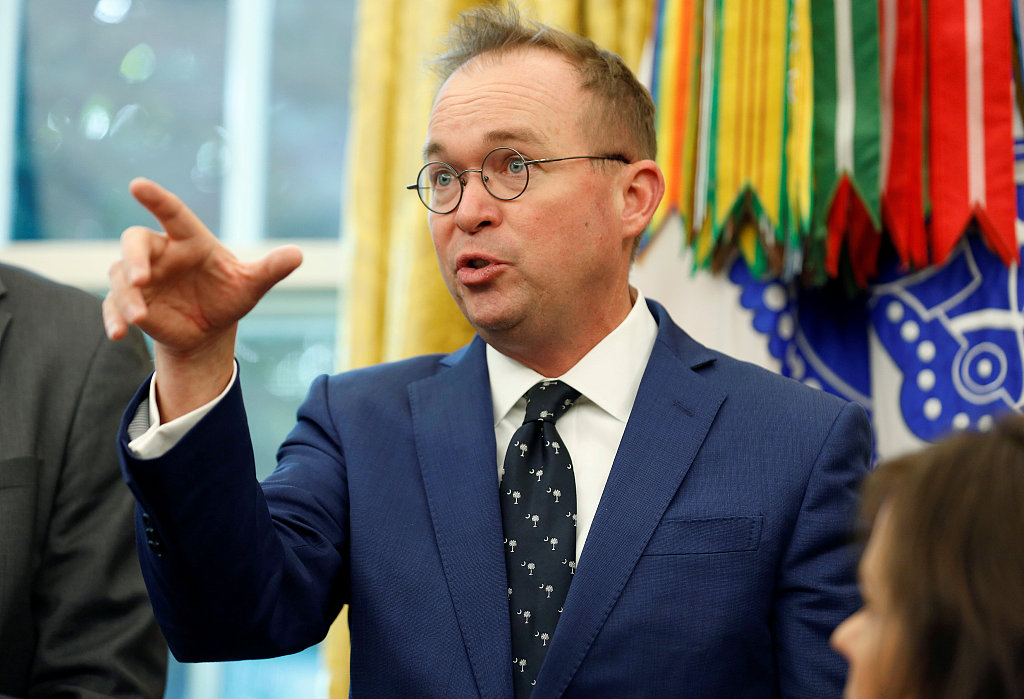 Director of the Office of Management and Budget Mick Mulvaney speaks during an event hosted by US President Donald Trump with workers on "Cutting the Red Tape, Unleashing Economic Freedom" in the Oval Office of the White House in Washington, US, October 17, 2018. (File photos: VCG)

"Mick has done an outstanding job while in the Administration," Trump announced on Twitter. "I look forward to working with him in this new capacity as we continue to MAKE AMERICA GREAT AGAIN!

"John will be staying until the end of the year. He is a GREAT PATRIOT and I want to personally thank him for his service!"

Trump, whose presidency is increasingly embroiled in legal troubles, announced earlier this month that Kelly, a former Marine Corps general, was leaving.

Kelly, who reportedly fell out with other close Trump aides, is only the latest in a long string of high-ranking officials to quit the embattled White House.

He agreed to stay on until at least January 2 to avoid leaving the president in the lurch.

However, even with several weeks' notice, Trump appears to be having difficulty in finding the right replacement.

His widely reported first choice, Nick Ayres, announced last weekend that he did not want the post.

Ayres, a 36-year-old Republican consultant currently serving as chief of staff to Vice President Mike Pence, was seen as a good fit for Trump's plan to start focusing on his 2020 re-election.

With Democrats taking over the House of Representatives in January and special prosecutor Robert Mueller near the end of an explosive probe into the Trump campaign's contacts with Russia during the 2016 election, the president is believed to be seeking a sharp political operator.

A major Republican figure, former New Jersey governor Chris Christie, announced Friday that he too was pulling out from consideration.

It was not immediately clear where Mulvaney fits into those longer-term plans.

He was also previously acting head of the Consumer Financial Protection Bureau, which protects consumers when they take loans and use credit cards.

While in the job, Mulvaney provoked anger in the Democratic Party with his campaign to downgrade the agency.

His new appointment appears to give Trump some breathing space ahead of the holidays, which the president will spend mostly at his Florida resort.

But a question still hangs on who can do the difficult job in the long term. Kelly was often described as "the adult in the room" during the turbulent period since his appointment in July 2017.

In an interview with Fox News this week, Trump said that his ideal candidate was "somebody that's strong, but I want somebody that thinks like I do."