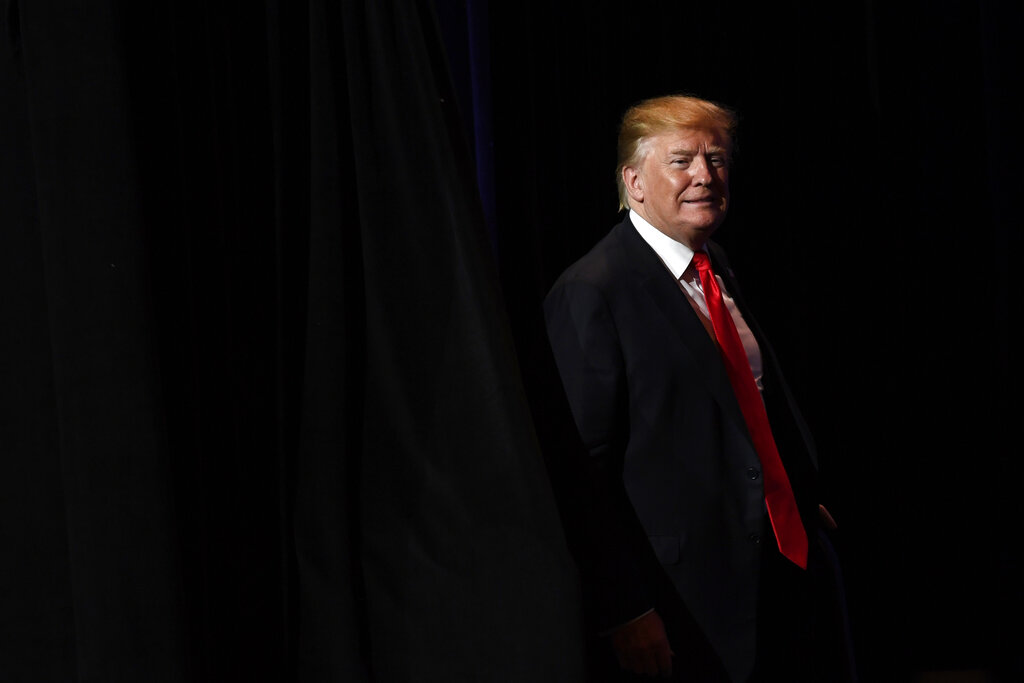 President Donald Trump distanced himself from Alabama's restrictive new abortion law by laying out differing personal views even as he urged anti-abortion activists to stay united heading into the 2020 election.

In a series of tweets about abortion, Trump did not state whether he was for or against the Alabama law, which forbids the procedure in almost all circumstances, including cases of rape and incest.

But a senior administration official said Sunday that the president is troubled by new state laws that seek to imprison doctors who perform abortions.

The official said Trump wanted to make clear that one can oppose abortion, as he does, but still agree to allow it when rape or incest is involved, or when the pregnant woman's life is at risk. The official spoke on condition of anonymity to discuss Trump's reasoning.

Trump tweeted late Saturday that gains by anti-abortion activists will "rapidly disappear" if, as he put it, "we are foolish and do not stay UNITED as one."

As he heads into re-election season, the president is trying to walk a fine line between a conservative base that favors criminalizing access to abortion and potentially angering women who already are skeptical of him.

Disagreement among Republicans is becoming apparent over Alabama's law, and Trump sees Democrats taking advantage of that.

House Minority Leader Kevin McCarthy of California, the top Republican in the Democratic-controlled chamber, opposed the law, saying he supports exceptions for rape and incest and serious risk to the woman's life. Evangelist Pat Robertson, meanwhile, said the law is too "extreme" and not the best vehicle to attempt to force the Supreme Court to revisit — and possibly overturn — Roe v. Wade, the high court's 1973 ruling that established a woman's constitutional right to an abortion.

Several of the Democrats who are competing for the right to challenge Trump in 2020 have come out against Alabama's law and other state moves to impose new abortion restrictions, vowing to protect abortion rights through national legislation or, if elected, their Supreme Court nominees.

Other state laws ban abortion once a fetal heartbeat is detected, which experts say typically happens around the sixth week of pregnancy, but is often before most women realize or confirm they are expecting a baby.

Trump tweeted that "We have come very far" on the anti-abortion front in the two-plus years since he took office, noting the addition of more than 100 conservative federal judges and two Supreme Court justices "and a whole new & positive attitude about the Right to Life."

His selections of Neil Gorsuch and Brett Kavanaugh for the Supreme Court tilted the political makeup of the nation's high court to the right, and emboldened conservatives who believe the time is ripe for a court case to challenge Roe v. Wade.

Trump also claimed that "The Radical Left" is "imploding on this issue" and urged Republican unity on abortion to keep Democrats from winning. Trump claims Democrats support abortion on demand, including ending pregnancies late in the term.

Trump noted in the tweets that he holds the same anti-abortion position as Republican President Ronald Reagan, but that stance was not a lifelong one for the current Oval Office occupant. Hailing from liberal New York City and decades before aligning with the GOP as he neared a serious run for president, Trump favored abortion rights. He also supported Planned Parenthood, a provider of women's health care services, including abortion.

Trump includes regular references in his speeches to what he says are the Democrats' extreme positions on abortion, including in formal settings like the State of the Union address and in the more free-wheeling atmosphere of his campaign rallies.

Republicans believe the politics of abortion have shifted somewhat in their favor in recent years. But the near-absolutist nature of the most recent state-level bills has sparked concerns inside Trump's team that the issue could energize his critics and female voters, with whom the president has long struggled.

Polling suggests the abortion issue has the potential to stoke political engagement among both parties. The General Social Survey released last year found 64% of Democrats, but just 35% of Republicans, saying a woman should be able to have an abortion for any reason.

Vice President Mike Pence, a conservative Christian and abortion opponent, avoided taking sides when he was asked about the Alabama law during an appearance in Wisconsin last week.

Pence replied that he is proud to be part of a "pro-life administration," adding that he and Trump "have worked to stand for the sanctity of life since the outset of this administration. And I know many states around the country are embracing life."