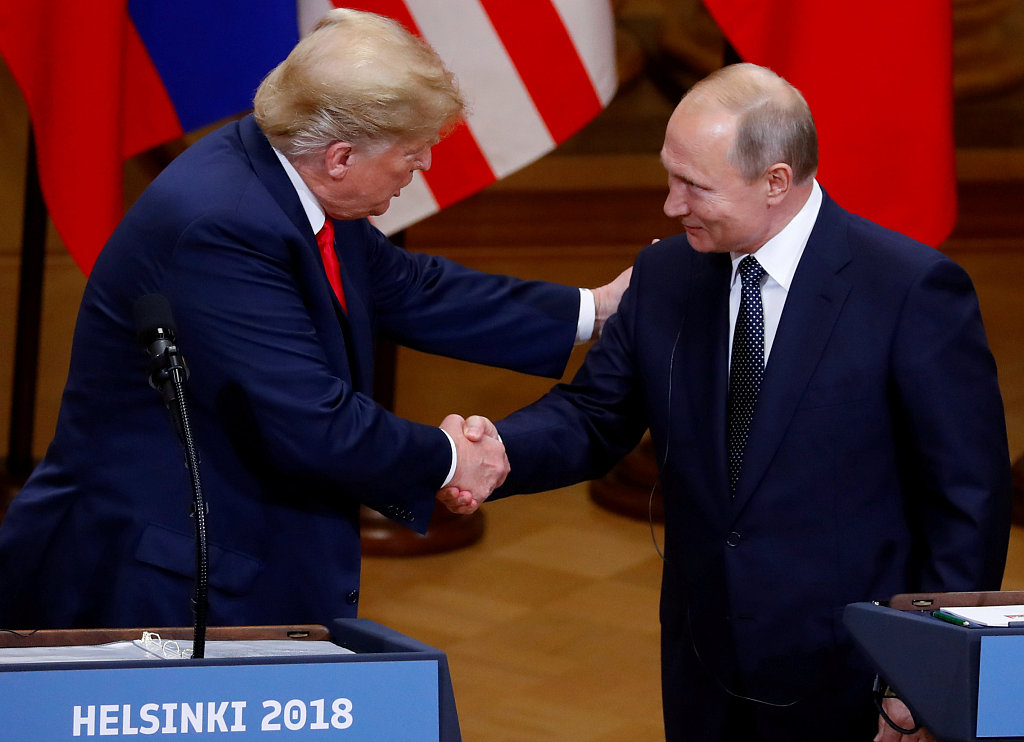 WASHINGTON, Nov. 27 (Xinhua) -- US President Donald Trump told media on Tuesday that he would consider canceling his scheduled meeting with his Russian counterpart Vladimir Putin, citing the ongoing Ukraine-Russia confrontation near the Kerch Strait that separates the Black Sea and the Sea of Azov.

So far, there is no comment from the Russian side on Trump's remarks, but Moscow has said its activities in the region is legitimate.

In an interview with The Washington Post at the White House, Trump said he was awaiting a "full report" from his national security team Tuesday evening about Russia's alleged capture of three Ukrainian naval ships and their crews in the Black Sea on Sunday.

The remarks came after Trump's restraint statement on Monday that he hopes the current confrontation between Ukraine and Russia could get "straightened out."

Before the interview was published, US National Security Adviser John Bolton said earlier on Tuesday at a White House press briefing that Trump, during his stay in Argentina, will meet many foreign leaders, including Putin.

US urges Europe to do more

Earlier on Tuesday, NATO said in a statement on its website that NATO allies "call on Russia to ensure unhindered access to Ukrainian ports and allow freedom of navigation."

"There is no justification for Russia's use of military force against Ukrainian ships and naval personnel," said the statement. "We call on Russia to release the Ukrainian sailors and ships it seized, without delay."

Also on Tuesday, the US State Department urged European nations to take more substantial actions to help Ukraine against Russia.

Saying the confrontation between Moscow and Kiev "is a dangerous escalation," State Department spokesperson Heather Nauert said although many European nations have imposed sanctions on Russia for its actions in Crimea and Ukraine, "not all of those sanctions ... have been fully enforced."

Earlier this year, Russia inaugurated a bridge over the Kerch Strait, which links the Crimean peninsula to the Russian mainland, and started carrying out inspections of commercial ships sailing through the Sea of Azov and the Kerch Strait.

Federica Mogherini, the EU's high representative for foreign affairs, on Nov. 19 said Russia's activities in the Sea of Azov "are damaging not only the Ukrainian economy, but also so many vessels that are flying European Union member states' flags."

In response to the accusations, Russian Foreign Ministry spokeswoman Maria Zakharova said Thursday at a weekly briefing that Russia considers legitimate its activities in the region.

"Russia strictly observes its agreement with Ukraine on cooperation in the Sea of Azov and the Kerch Strait of Dec. 24, 2003, which fixes the status of the sea as internal waters of Russia and Ukraine," said Zakharova.

The Ukraine-Russia ties, strained over Crimea and Eastern Ukraine, saw an abrupt escalation this week.

The Ukrainian Navy said Sunday that Russian forces opened fire and seized three Ukrainian ships near the Kerch Strait, adding that six Ukrainian military sailors were wounded, two of them in serious condition, in the attack.

The Ukrainian parliament on Monday supported a bill imposing a martial law in certain regions for 30 days starting from Wednesday due to the tensions with Russia in the Sea of Azov.

The law will be imposed not across the whole country, but only in regions bordering Russia, Moldova's breakaway region of Transnistria, where Russian troops are stationed, and regions located on the shores of the Black Sea and the Sea of Azov, said Ukrainian President Petro Poroshenko.

An emergency meeting of the UN Security Council was called on Monday morning over the escalating situation.

Wu Haitao, China's deputy permanent representative to the United Nations who chaired the meeting, told the UN Security Council that China has noted the altercation between Russian and Ukrainian naval ships.

"China hopes and calls for the relevant parties to exercise restraint to avoid any further escalation of tension and properly resolve the relevant issues through dialogues and consultations," said Wu.