President Donald Trump threatened Thursday to send the military to close the border against an "onslaught" of migrants, stepping up his anti-immigrant rhetoric ahead of congressional elections. 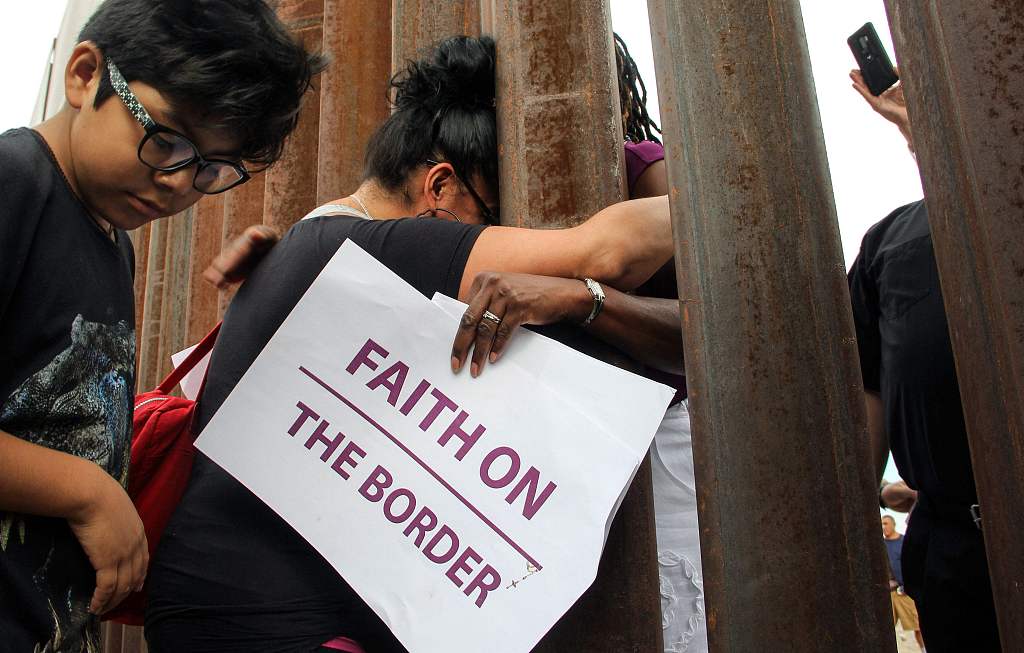 People embrace through the bars of the US-Mexico border fence during an inter-religious event for justice and peace in Ciudad Juarez, State of Chihuahua, Mexico, on September 7, 2018. (Photo: VCG)

As several thousand Hondurans made their way through Central America toward the US border, Trump blamed Democrats for an "assault on our country by Guatemala, Honduras and El Salvador" with a caravan "INCLUDING MANY CRIMINALS."

"I must, in the strongest of terms, ask Mexico to stop this onslaught - and if unable to do so I will call up the U.S. Military and CLOSE OUR SOUTHERN BORDER!"

Trump has made his call for a wall on the southern border a signature issue of his two-year presidency, but Thursday's tweet storm was especially fierce.

Trump suggested he was even prepared to put at risk the recently renegotiated North America Free Trade Agreement (NAFTA) between Mexico, the United States and Canada, redubbed as USMCA.

"The assault on our country at our Southern Border, including the Criminal elements and DRUGS pouring in, is far more important to me, as President, than Trade or the USMCA," he said.

US Secretary of State Mike Pompeo, meanwhile, is embarking on a tour of the region that will take him to Panama on Thursday and to Mexico Friday.

The Mexican visit is important for future relations because it comes just ahead of the inauguration in December of President-elect Andres Manuel Lopez Obrador.

"The position of President Trump is the one he has always raised," Ebrard told local radio station Radio Centro.

"It was predictable and also the election process is very close, so he is making a political calculation," he added.

The president's message was part of a broad strategy to crack down on illegal immigrants and tighten rules for legal migrants.

Barely a week goes by without Trump warning about the danger posed by ultra-violent Central American gangs like MS-13, while chants of "build the wall" are a staple of his pre-midterms campaign rallies.

The latest focus is on some 2,000 Hondurans who departed Saturday from the city of San Pedro Sula in a caravan headed for the US border.

A first group of several hundred Honduran migrants arrived late Wednesday on the Guatemalan-Mexican border, where they overflowed a shelter in the town of Tecun Uman, leaving many to sleep in the town square or on the street, an AFP correspondent said.

Many were traveling with a single change of clothes and little money. Others were carrying young children in their arms.

Several migrants told AFP the group plans to wait for the rest of the caravan to arrive, then cross the border en masse in hopes of overwhelming the Mexican immigration authorities, who have vowed to detain anyone without papers.

The migrants say they organized for the long and difficult journey on social media, but Washington suspects the group has been organized as a deliberate provocation.

"This caravan did not appear organically," a senior Trump administration official told journalists.

"There's a political aspect and an organizational aspect which frankly seeks to sow chaos and dissent and that needs to be dealt with," the official said, speaking on condition of anonymity.

In Mexico, hundreds of riot police deployed at a bridge on the border with Guatemala. Guatemala also sent police reinforcements.

However, at the Honduras-Guatemala border earlier, the migrants were able to overwhelm guards by crossing en masse.

As for the US border, it remained unclear whether Trump's threat would result in any military deployment.

The president announced plans in April to send thousands of National Guard troops to the border, where they could remain until his promised wall is constructed.

But at least five US states later refused to send the troops amid an outcry over a since-abandoned White House policy to separate migrant children from their parents at the border.