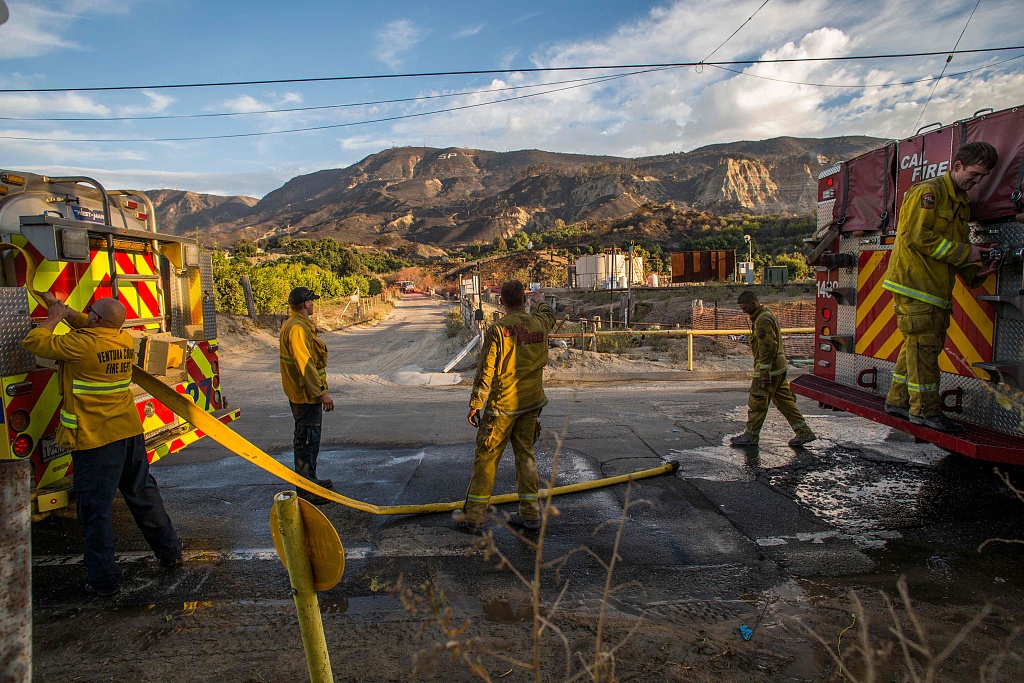 Firefighters refill their water tank on their way to control hotspots of the Maria Fire, in Santa Paula, Ventura County, California on November 02, 2019. (Photo: VCG)

US President Donald Trump threatened once again Sunday to withhold federal aid from California after its Democratic governor criticized his environmental policies.

Over the past two weeks, fires have ravaged nearly 100,000 acres (40,000 hectares) in the sprawling western state, where firefighters on Sunday were battling the Maria Fire, about 60 miles (100 kilometers) northwest of Los Angeles.

"Every year, as the fire's (sic) rage & California burns, it is the same thing-and then he comes to the Federal Government for $$$ help. No more. Get your act together Governor," he said on Twitter.

Newsom, responding on Twitter, brushed off Trump's criticism in a terse 12 words: "You don't believe in climate change. You are excused from this conversation."

Newsom had offered a fuller critique in a recent interview with The New York Times, pointing to Trump's roll-back of environmental protections.

"We're waging war against the most destructive fires in our state's history," he said, "and Trump is conducting a full-on assault against the antidote."

The president has on several occasions openly questioned the scientific consensus that human activity causes changes in the climate, and notably the drought that has contributed to the California fires.

His administration decided on September 18 to revoke California's authority to set its own standards for automobile pollution.

Newsom criticized the Republican government's ambivalence in dealing with the disasters.

"Last night they approved seven additional emergency grants in record time," Newsom told the Times. "But what's so insidious, and what's so remarkable is that he's doing everything right to respond to these disasters and everything wrong to address what's happening to cause them."

Far from the political struggles, firefighters were continuing to press their fight against the Maria Fire, which they said Sunday is now 50 percent contained, and the Kincade Fire north of San Francisco, now 76 percent contained.

Other fires, including some that threatened multi-million-dollar homes and iconic institutions in the Los Angeles area, have subsided, and residents who had evacuated are beginning to return home.