WORLD Trump to give verdict on Iran nuclear deal

Trump to give verdict on Iran nuclear deal 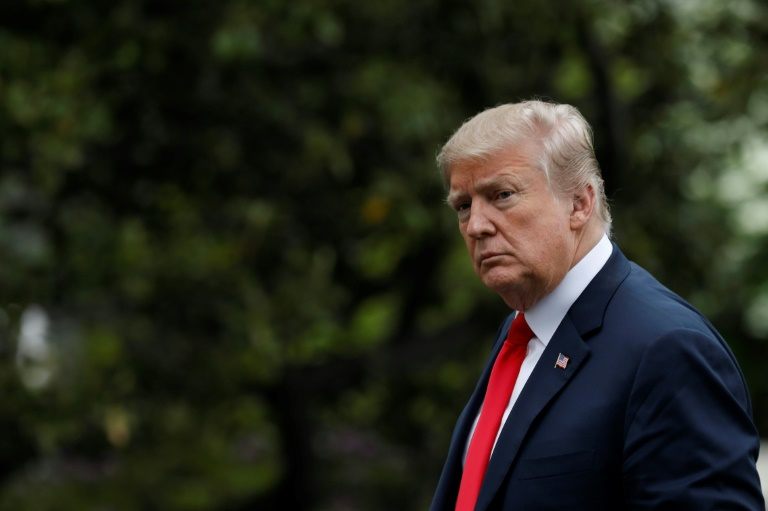 US President Donald Trump will unveil his decision on Iran on Tuesday (Photo: AFP)

President Donald Trump is expected to deliver a hammer blow to the Iran nuclear deal Tuesday, removing key sanctions relief for Tehran and casting the accord's future into serious doubt.

Officials and diplomats expect the pugnacious US leader to ignore last-ditch European pleas and withdraw US support for what he has repeatedly slammed as a "very badly negotiated" agreement.

At 2:00 pm (1800 GMT), Trump will make perhaps the most consequential foreign policy announcement of his young presidency to date from the Diplomatic Reception room of the White House.

Concretely, he must decide by May 12 whether to continue to waive sanctions on Iran's central bank and its oil sector dealings, a key pillar of the 2015 agreement reached between Tehran and six world powers.

His decision will be closely watched across the Middle East, where a number of powers are mulling their own nuclear programs, and in Pyongyang ahead of non-proliferation talks between Trump and North Korean leader Kim Jong Un.

For months, Trump has unsuccessfully demanded changes to the Obama-era nuclear accord, which saw Iran stop military-scale uranium enrichment and open up to inspections, in return for massive sanctions relief.

Months of intensive talks between the United States and European allies ultimately stalled when Berlin, London and Paris refused Trump's demand to rewrite key provisions of the accord.

One European diplomat, echoing the somber mood around foreign embassies in Washington on the eve of Trump's announcement, said "there is plainly a difference of opinion."

"I would like to pretend to you today that I feel that there is a chance of the existing (deal) remaining intact," the European official said. "I think that that chance may exist but it is very small."

A French official said President Emmanuel Macron left the United States last week "convinced that we would get a negative decision."

Ahead of Trump's verdict, diplomats shifted into damage limitation mode, hoping that beyond his inevitably harsh rhetoric, he stops short of immediately reimposing sanctions.

Trump may decide to denounce the deal but leave sanctions in limbo, offering what diplomats say is a last slim chance to salvage the agreement.

On the other end of the scale, Trump could decide to reimpose central bank and a thicket of other sanctions against Iran -- from finance to transport -- effectively ending US participation in the deal and putting European companies at risk of punitive measures.

In Brussels, officials are already working on "blocking" measures that would protect EU citizens and companies from US prosecution.

"We are having conversations obviously and we are working on a number of proposals that could protect European companies and operators," a senior EU official told reporters.

Tehran has sent mixed signals about its potential response, hinting it could leave a fatally undermined deal and resume military-scale uranium enrichment.

But Iranian President Hassan Rouhani -- who publicly backed engagement with the United States and could face a domestic backlash if that policy fails -- indicated his country would stay in the agreement even if the United States pulls out.

Iran staying in the deal makes it more likely that vital avenues for European trade would stay open.

Since his days as a presidential candidate, Trump has vowed to scrap the deal, but has until now stopped short, amid fierce debate inside his administration.

According to a CNN poll published Tuesday, 63 percent of Americans believe their country should not withdraw from the agreement.

The United States does not allege that Iran is breaking the terms of the agreement, but says the accord itself does not permanently end Tehran's controversial nuclear programs, stop missile tests or end bellicose Iranian activity in the region.

Trump has complained, in particular, that Iran gets sanctions relief up front but could return to controversial activities once restrictions reach their "sunset" in 2025.

His administration has also been angered by Iran's support for Syrian President Bashar al-Assad, the Lebanese armed group Hezbollah in Syria's civil war and Shiite Huthi rebels in Yemen.

With the arrival of John Bolton as National Security Advisor and Mike Pompeo as Secretary of State, the Iran hawks now appear to be in the driver's seat.

Reimposing oil sanctions could be just the first step of a "a broad coercive campaign" to "break the regime's back" according to Cliff Kupchan, an analyst with the Eurasia group.

European powers are deeply skeptical that Trump's administration has a backup plan to restrain Iranian ambitions once he has made good on his campaign promise to tear up the deal.

Britain's Boris Johnson, who was in Washington to lobby Pompeo and Vice President Mike Pence, told Fox News: "Plan B does not seem to be, to me, particularly well-developed at this stage."