WORLD Trump to hold off steel tariffs for EU, six others: Lighthizer

Trump to hold off steel tariffs for EU, six others: Lighthizer 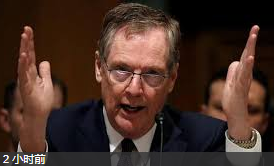 U.S. President Donald Trump will not apply new steel and aluminum tariffs to the European Union and other trading partners which are currently negotiating exemptions, U.S. Trade Representative Robert Lighthizer said on Thursday.

“The idea that the president has is that, based on a certain set of criteria, that some countries should get out,” he told a Senate committee hearing.

“There are countries with whom we’re negotiating and the question becomes the obvious one that you think, as a matter of business, how does this work. So what he has decided to do is to pause the imposition of the tariffs with respect to those countries.”