WORLD Trump to test his powers in South Carolina runoff

Trump to test his powers in South Carolina runoff 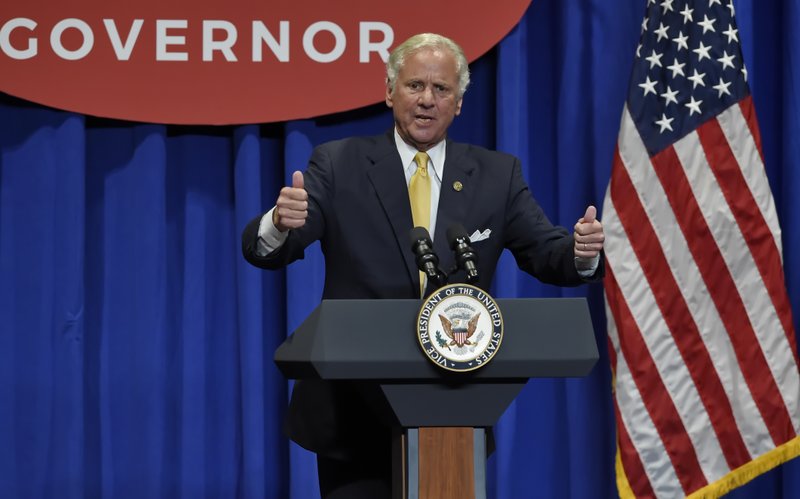 President Donald Trump’s effort to bend the Republican Party to his will faces its next test Tuesday, when South Carolina voters choose between two GOP gubernatorial candidates who both claim to be Trump acolytes.

The president has already made his pick: incumbent Gov. Henry McMaster, a longtime Trump supporter who failed to win the GOP primary outright earlier this month. McMaster is waging a runoff campaign against businessman John Warren, a first-time politico who some see as more like Trump himself.

Like so much in Trump’s world, the race is coming down to a question of loyalty. The White House is throwing everything at its disposal into the race to save McMaster, who went out on a political limb for Trump at a crucial point in the 2016 Republican presidential primaries. Trump issued several tweets over the past week praising the governor and noting his loyalty. He dispatched Vice President Mike Pence to the state on Saturday. The president himself will stump for McMaster on Monday afternoon in West Columbia.

Loyalty to Trump is on the minds of South Carolinians as well. Voters in the state’s coastal region surprised many political observers this month when they ousted Rep. Mark Sanford, a reliable conservative, but someone who criticized Trump. That critique had prompted Trump to endorse the congressman’s opponent, who won the race.

When voters in South Carolina return to the polls Tuesday, they’ll be deciding in part which is more meaningful: a Trump endorsement, or a candidate who embodies some of Trump’s outsider credentials.

“I think that if anyone supported Donald Trump and they look and truly give an honest assessment of whose resume and whose background is more similar to Donald Trump, they will side with me,” Warren told The Associated Press in a recent interview. “It is clear I’m an outsider. I am a businessman. I’m a conservative. The establishment doesn’t want me to get elected.”

With all the attention coming from the White House, Winthrop University political scientist Scott Huffmon said it’s impossible for voters to ignore the factor that the president could play in the race.

“Trump’s obviously floating around over all of this. You have one candidate endorsed by Trump, but he’s the consummate insider. But then you have a Trump-like candidate,” Huffmon said. “When you have Trump’s endorsement, but you’re running against someone who is very Trump-like, you’ve got to switch gears and figure out the way you can undermine them.”

South Carolina went solidly for Trump in 2016 and remains solid Republican territory. The winner on Tuesday will face Democrat James Smith in the general election.

Trump has been stung in some other races into which he’s waded. In Alabama’s GOP Senate primary last year, the president originally supported Sen. Luther Strange, who lost the nod to Roy Moore. Trump then stuck with Moore in the general election, even after he was hit with multiple allegations of sexual misconduct. Moore lost the race to Democrat Doug Jones. In a Pennsylvania district Trump carried in 2016 by 20 points, Republican Rick Saccone won Trump’s endorsement, but lost to Democrat Conor Lamb by a razor-thin margin.

But Trump is exuding confidence following his successful endorsement this month of state Rep. Katie Arrington in race against Sanford. The president took another victory lap last week, calling Sanford a “nasty guy” in a closed-door GOP conference meeting.

Trump’s unlikely relationship with McMaster began during the 2016 GOP primaries. McMaster, the lieutenant governor at the time who was seen as an establishment figure, initially backed fellow South Carolinian Lindsey Graham’s short-lived candidacy. After it folded, McMaster has said he fielded calls from many other GOP White House hopefuls before settling on putting his support behind Trump.

“He’s a man of action,” McMaster said at the time. “He speaks in words that everybody understands. It’s a delightful thing to see.”

That support marked a significant divide between McMaster and then-Gov. Nikki Haley, who had been vocal in her opposition to some of Trump’s rhetoric, including a temporary ban on immigrants from some Muslim countries. Haley backed Marco Rubio and then Ted Cruz, only settling on Trump when he became the GOP nominee.

Just weeks after his election, Trump selected Haley __ seen as a rising GOP star __ as his ambassador to the United Nations. Her departure cleared the way for McMaster in early 2017 to ascend to the governorship he had sought since losing a bruising primary to none other than Haley seven years earlier.

Now seeking his first full term on his own merit, McMaster is running as an incumbent, pointing toward his efforts to boost South Carolina’s economy by growing jobs and proposing tax cuts. McMaster has also used the power of his office to show Trump loyalists he and the president are similarly aligned, directing state agencies not to allocate public money to health care providers affiliated with abortion clinics. He also called for a law requiring municipalities to certify they’re not so-called “sanctuary cities,” a measure decried by some as political pandering intended to boost McMaster’s campaign, given that the issue has not been a problem in the state.

Warren, meanwhile, has positioned himself as the candidate who, despite Trump’s actual backing of another candidate in this race, is the choice who more embodies the president himself. Like Trump, he’s made millions in business, able to nearly self-fund his entire campaign. And like Trump, he’s never before been directly involved in politics, spending his time in the private sector.

But Huffmon, the Winthrop University professor, said Warren will have to find a way to harness the Trump-like energy in his own way if he’s to be successful.

“If Warren can bring some new people in and both convince Trump supporters he is more Trump-like, and get a few disaffected, moderate conservatives who don’t want to pick the guy Trump’s endorsing, ... he can pull that off,” he said.