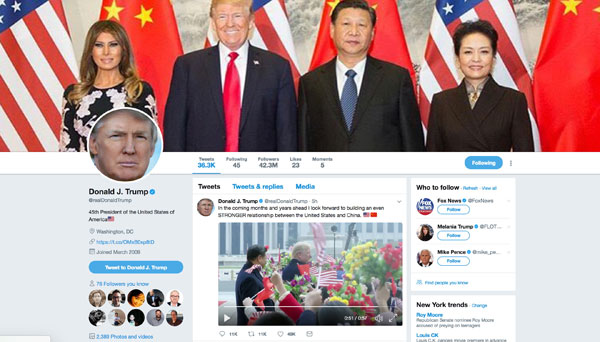 A screenshot of US President Donald Trump's Twitter account,on Thursday.

US President Donald Trump, who is on a "state visit-plus" in China, tweeted on Thursday: "In the coming months and years ahead I look forward to building an even STRONGER relationship between the United States and China."

It was one of a slew of messages that Trump has sent since he arrived in the country on Wednesday. He called his first hours in Beijing "unforgettable" and the lavish welcome he was given "beautiful".

Trump enthusiastically thanked his host, President Xi Jinping, for his hospitality and spoke highly of the "incredible" display of diplomacy. "President Xi, thank you for such an incredible welcome ceremony. It was a truly memorable and impressive display!", Trump wrote.

On Thursday, Trump changed his main Twitter account image to show a picture of him, his wife, Melania, President Xi and his wife, Madame Peng Liyuan.

Trump also retweeted a post by Dan Scavino, the White House director of social media and assistant to the president, about China Daily's front-page coverage of his visit, showing a group photo of the Trumps with President Xi and his wife Peng in front of the Hall of Supreme Harmony in the Forbidden City, also known as the Palace Museum. 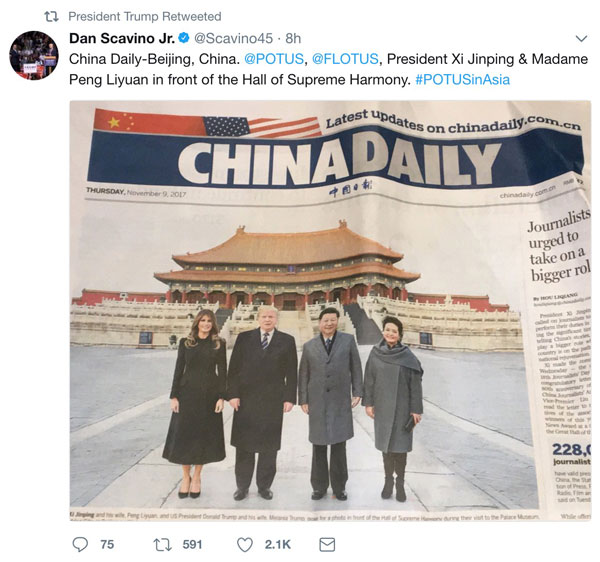 On Thursday, US President Donald Trump retweeted a picture of China Daily's front-page report about his visit to China on Wednesday.

China Daily, the national English-language newspaper, has launched multi-media coverage of the Trump-Xi summit meeting, including special pages in its print editions in China and overseas.

After arriving in the Chinese capital, the Trumps had afternoon tea with President Xi and his wife at the Hall of Embodied Treasures in the Forbidden City, before a tour of the ancient imperial palace that included a performance by Peking Opera students.

"On behalf of @FLOTUS Melania and I, THANK YOU for an unforgettable afternoon and evening at the Forbidden City in Beijing, President Xi and Madame Peng Liyuan. We are looking forward to rejoining you tomorrow morning!" Trump wrote.

A photo with the performers, who were dressed in ornate traditional Chinese costumes, was apparently one of Trump's favorites from the afternoon tour. He used it as the main image on his Twitter account. He also posted or retweeted four other pictures from his tour of the Forbidden City.

Before departing from the United States, Trump tweeted that he would "be headed to China where I very much look forward to meeting with President Xi who is just off his great political victory", referring to Xi's re-election as general secretary of the Communist Party of China Central Committee last month.

David Shambaugh, a professor of political science at George Washington University, said he is a great admirer of the collections at the Forbidden City.

"It is a very important heritage for Chinese civilization, and very important that President Trump, on his first visit to Beijing, be shown this 5,000 years of history," Shambaugh told China Daily. "That, I'm sure, will have a big impact on him and his wife."

Shambaugh added that the personal chemistry between the two leaders seems very positive, and that the meeting is an important step forward to stabilize and improve cooperation between the two countries in various sectors.