Trump tweets his outrage in all caps as votes are counted

US President Donald Trump spent a second day in the White House on Thursday stewing over election results that suggested a path to victory was slipping from his grasp, even as his campaign projected confidence. 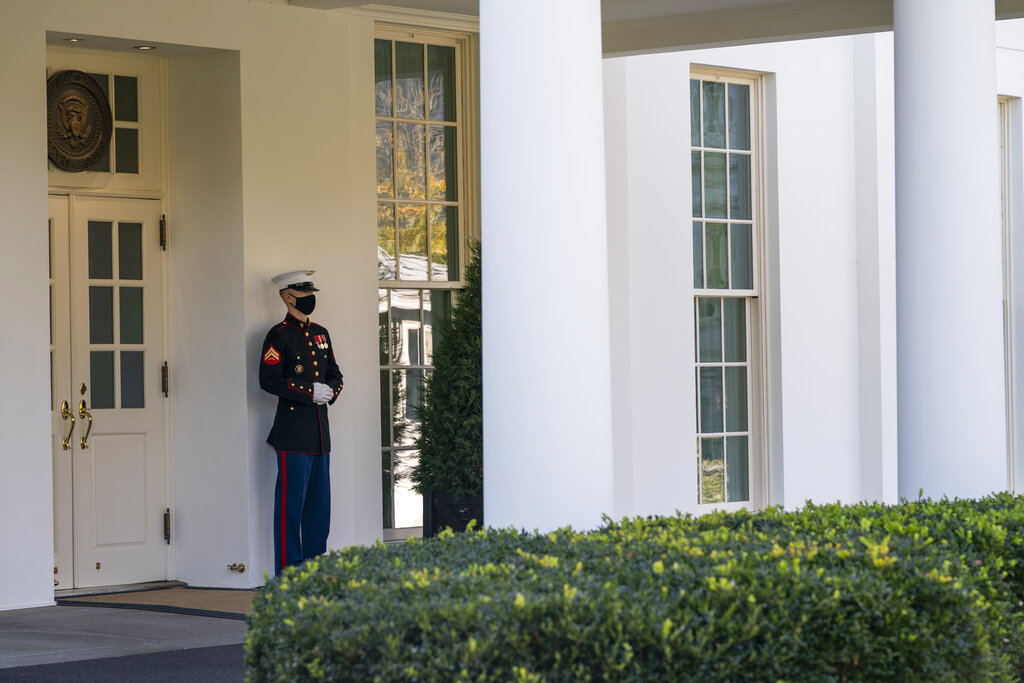 A Marine is posted outside the West Wing of the White House, signifying the President is in the Oval Office, Thursday, Nov. 5, 2020, in Washington. (Photo: AP)

Trump has not been seen in public since his premature declaration of victory in the wee hours of Wednesday morning, but the White House said that he would deliver “remarks” Thursday evening, The flurry of pronouncements flowing out of the White House ahead of the election has slowed to a trickle. And in the West Wing, some aides were eyeing returns warily and losing confidence that outstanding states would break Trump’s way.

Trump was monitoring the results and calling allies from the White House residence and the Oval Office. Texas Gov. Greg Abbott and Arizona’s Doug Ducey were among those fielding his calls.

White House spokesman Judd Deere said the president was “working” but declined to elaborate. Trump's preoccupation with the election results was evident from his tweets.

“STOP THE COUNT!” he proclaimed. But the president has no authority over election counting and halting the count at that moment would have resulted in a swift victory for his Democratic rival, Joe Biden.

“ANY VOTE THAT CAME IN AFTER ELECTION DAY WILL NOT BE COUNTED!” he later wrote. That seemed to advocate tossing out untold legally cast votes, including those from service members stationed overseas. Many states accept mail-in ballots after Election Day as long as they were postmarked by Nov. 3.

Trump's all-caps declarations had the tone of a last stand from a man who abhors losing. They mirrored a last-ditch legal effort waged by his campaign in several key undecided battlegrounds that was largely dismissed by experts as superficial and unlikely to shift the outcome in any meaningful way.

With just a handful of states yet to be decided, Biden had a clear advantage over Trump in the still-developing election results, but the president did still have a narrow path to the 270 electoral votes needed to win reelection. To prevail, Trump would have to win all four remaining battleground states; Biden would have to win one.

"Donald Trump is alive and well,” Trump campaign manager Bill Stepien said in a call with reporters Thursday morning. He predicted Trump would win Pennsylvania and other states that were too early to call.

White House and campaign staff were engaged in the same waiting game as the rest of the nation, somberly glued to television screens and watching results trickle in. In the West Wing, some aides have been eyeing returns warily, losing confidence that outstanding states will break Trump’s way. Some are all but resigned to the idea of a Trump loss and have been discussing future employment prospects even as others continue to make unsubstantiated allegations of widespread voter fraud.

Those have been echoed by Trump, who has falsely claimed victory in several key states while amplifying unsubstantiated conspiracy theories about expected Democratic gains as legally cast absentee ballots and early votes were tabulated.

Trump had no events on his schedule Thursday and made no reference to the surging coronavirus. Confirmed new positive cases climbed to an all-time high of more than 86,000 per day on average, according to data compiled by Johns Hopkins University. Hospitalizations are also setting records and deaths are on the rise, up 15% to an average of 846 deaths every day.

Biden received a private briefing on the virus on Thursday afternoon, before emerging to tell the American public to be patient in awaiting the election results.

It was a very different tone from Trump, whose campaign released an all-caps statement from the president to rile up his base.

“IF YOU COUNT THE LEGAL VOTES, I EASILY WIN THE ELECTION! IF YOU COUNT THE ILLEGAL AND LATE VOTES, THEY CAN STEAL THE ELECTION FROM US!” he said. Officials are currently counting legal ballots and there is no evidence of any kind of widespread or decision-altering fraud.

Trump's campaign was nonetheless dispatching loyalists like former New York City Mayor Rudy Giuliani, former campaign manager Corey Lewandowski and former director of national intelligence Ric Grenell to hold press conferences in states where they are mounting legal challenges. And as they tried to sow public doubt about a potential Trump loss, they announced they would be creating a website and reopening a phone line to collect accounts of alleged fraud.

The campaign also bombarded supporters with fundraising messages warning of unsubstantiated Democratic efforts to “steal” the outcome. The effort had raised well over $10 million, according to a person familiar with the matter who spoke on condition of anonymity because of not being authorized to discuss it publicly. At least some of the money was earmarked for paying down general election debt.

Meanwhile, allies of the president, including his eldest son, Donald Trump Jr., used Twitter to call out what he labeled, “The total lack of action from virtually all of the ‘2024 GOP hopefuls.’"

“They have a perfect platform to show that they’re willing & able to fight but they will cower to the media mob instead,” he wrote, adding: “Don’t worry @realDonaldTrump will fight & they can watch as usual!”

Several of those who have been discussed as possible 2024 Republican candidates quickly chimed in, including former South Carolina Gov. Nikki Hale, who served as Trump's ambassador to the United Nations, and Arkansas Sen. Tom Cotton, a conservative firebrand.

Trump Jr., who has also been discussed as a potential future candidate, made clear the family has no interest in calmly waiting for votes to be counted.

“The best thing for America’s future is for @realDonaldTrump to go to total war over this election to expose all of the fraud, cheating, dead/no longer in state voters, that has been going on for far too long,” he wrote. “It’s time to clean up this mess & stop looking like a banana republic!”