WORLD Trump tweets Scott will be a 'great Governor'

Trump tweets Scott will be a 'great Governor' 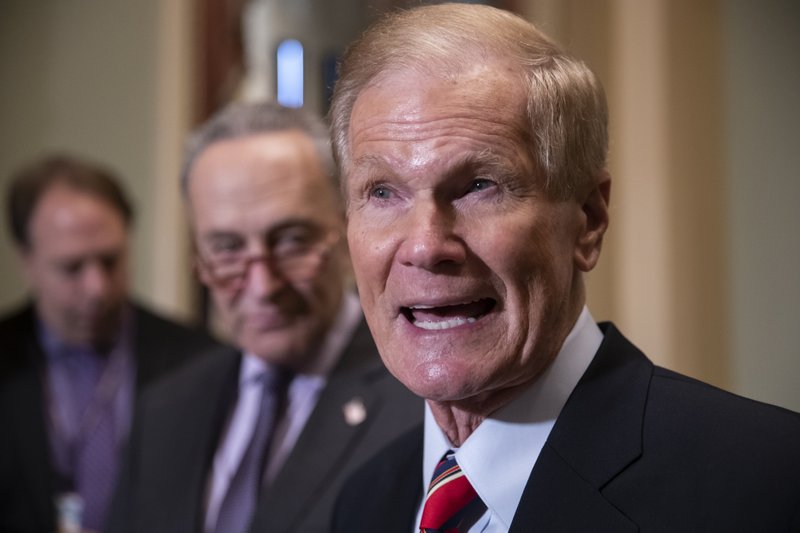 The Latest on Florida’s election recount (all times local):

U.S. Sen Bill Nelson ended his bitterly close re-election bid Sunday by conceding to Republican Rick Scott, Florida’s outgoing governor. Nelson gave up the fight on a day when Florida’s counties had to submit their official results after a sometimes bumpy recount. Those results showed the three-term incumbent trailed Scott by more than 10,000 votes.

Trump tweeted Sunday in support of Scott, writing, “He was a great Governor and will be even a greater Senator in representing the People of Florida. Congratulations to Rick on having waged such a courageous and successful campaign!

Nelson gave up the fight Sunday to Florida’s outgoing governor on a day when Florida’s counties had to submit their official results. Those results showed that the three-term incumbent trailed Scott by more than 10,000 votes.

Nelson’s concession capped tumultuous days of recounting and political tension in the perennial presidential swing state. It also will likely end the long-running political career of the 76-year-old Nelson. He was first elected to Congress nearly 40 years ago and then to the Senate in 2000.

Nelson and Democrats had filed several lawsuits over the recount, but a federal judge rejected most of them.

Florida will not officially certify the final totals until Tuesday.

The defeat ends Nelson’s lengthy political career. The three-term incumbent was first elected to the U.S. Senate in 2000. Before that he served six terms in the U.S. House and as state treasurer and insurance commissioner for six years.

Scott spent more than $60 million of his own money on ads that portrayed Nelson as out-of-touch and ineffective. Nelson responded by questioning Scott’s ethics and saying he would be under the sway of President Donald Trump.

Results posted Sunday show after a recount Nikki Fried defeated Republican Matt Caldwell by 6,753 votes out of 8 million cast. That’s about one vote out of every 2,000 cast.

If the results are certified Tuesday, Fried will replace Republican Adam Putnam in January. He was barred from seeking a third term and ran unsuccessfully for the Republican gubernatorial nomination.

Fried would replace apparently ousted U.S. Sen. Bill Nelson as the only Florida Democrat holding statewide office. The governor, the other two Cabinet positions and both senators will be Republicans.

The results show that Scott is poised to end Nelson’s lengthy political career. The three-term incumbent was first elected to the U.S. Senate in 2000. Nelson has scheduled an announcement later Sunday afternoon.

Scott spent more than $60 million of his own money on ads that portrayed Nelson as out-of-touch and ineffective. Nelson responded by questioning Scott’s ethics and saying he would be under the sway of President Donald Trump.

Florida counties have hit the deadline for submitting official results in this year’s contentious midterm elections.

Counties had until noon on Sunday to finish up recounts and turn final totals in closely watched races for U.S. Senate and governor.

State election officials were expected to announce the totals later Sunday, and will officially certify the results on Tuesday.

Counties were legally required to do a machine recount after the initial results showed the race for governor and U.S. Senate very close. State officials then ordered a hand recount earlier in the week

Andrew Gillum, who tried to energize Florida’s young and minority voters through a Democratic coalition seeking to end two decades of Republican control of the governor’s office, ended his hard-fought campaign Saturday as the state’s first black nominee for the post.

Gillum, whose refrain had been “bring it home” as he recounted stories of growing up poor in the state, concluded his campaign with a Facebook video he recorded alongside his wife in a park.

In his four-minute plus video, Gillum congratulated Republican Ron DeSantis and also vowed to remain politically active even though his term as mayor of the Florida capital of Tallahassee ends next week. Of his future plans, Gillum said: “stay tuned.”

Gillum, just 39 years old, earned national attention and financial backing from well-known liberal billionaires with his first bid for statewide office. He ran on a liberal platform that included expanding Medicaid and raising taxes to spend more on education even though both ideas would have been hard to pass through the GOP-controlled Legislature.