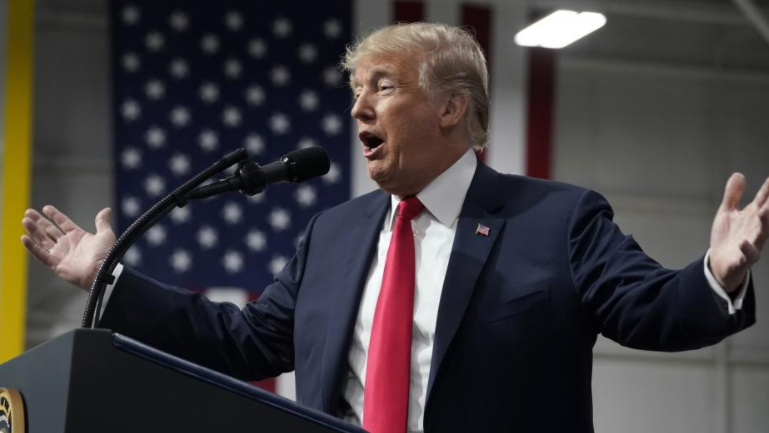 President Donald Trump attacked his critics, promoted his steel and aluminum tariffs and tossed out an idea to have drug dealers face the death penalty, addressing a raucous rally on Saturday for a Republican congressional candidate in a tight race.

Trump’s appearance was aimed at helping Republican Rick Saccone in a district Trump won overwhelmingly in 2016 as part of a narrow win in Pennsylvania.

But while he heartily endorsed Saccone as a “really good person,” Trump spent a lot of time talking about his own fortunes in a “Make America Great Again” rally in an airport hangar at the Pittsburgh International Airport.

He said it was crucial for Republicans to muster forces to turn back a strong Democratic drive to win one or both houses of the U.S. Congress in November midterm elections.

“We need Republicans. We need the vote,” Trump said, saying Democrats would take away, among other things, “your Second Amendment rights” to bear firearms.

“You think her life is so easy folks? Not so easy,” he said.

Trump said the country should discuss having drug dealers face the death penalty because they are responsible for thousands of deaths.

A day after getting news that the U.S. economy produced 313,000 jobs last month, Trump said his policies are paying off. He said 25 percent tariffs on steel imports will boost Pennsylvania’s economy.

Critics say the tariffs could trigger retaliatory trade measures and damage the U.S. economy. There are also doubts about how far Trump’s policies will go toward resuscitating the battered American steel industry.

“Your steel is coming back. It’s all coming back,” Trump told several thousand cheering supporters.

Trump also said he hoped to run for reelection against Democrat Oprah Winfrey, although the entertainer has ruled out a run.

Saccone is trying to win an election on Tuesday in Pennsylvania’s 18th District to replace Republican Tim Murphy, who resigned last fall while enmeshed in a sex scandal.

Polls show Saccone is in a close race against Democrat Conor Lamb. A Saccone loss would be the first loss of a Republican seat in the House of Representatives since Trump took office in January 2017, although Republicans would still control of the chamber.

The race could signal how much help Trump can provide Republican congressional candidates trying to keep control of both the House of Representatives and the Senate in midterm elections next November.

Typically the party that controls the White House loses seats in the U.S. Congress in the first election after a new president takes office. Trump hopes a strong economy and tax cuts enacted in December will help him beat the odds.