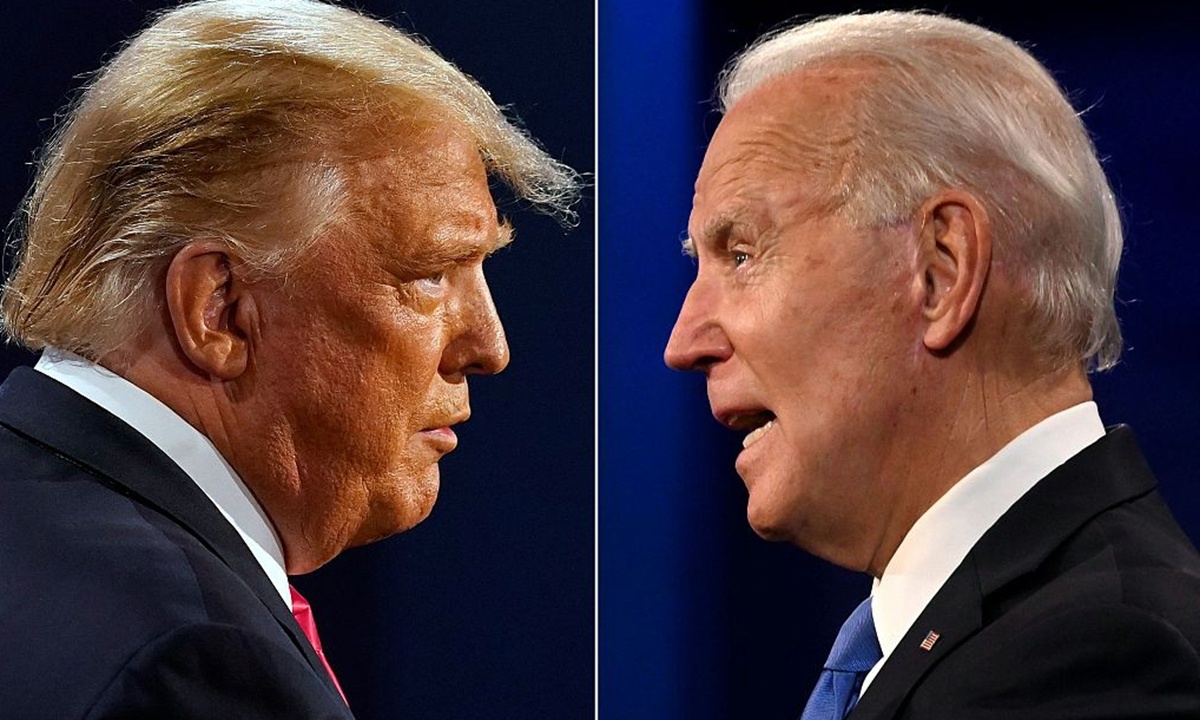 Outgoing US President Donald Trump is seeking to further escalate diplomatic and economic tensions with China through banning US transactions with eight Chinese mobile apps and holding a "political-military dialogue" with the island of Taiwan, in what Chinese experts call last minute political grandstanding to boast his "toughness" toward China and to set up traps to hamstring his successor Joe Biden.

However, risks of serious escalation in economic and diplomatic areas remains, as Trump might unleash a frenzy of dramatic actions against China in his final days in ill attempt to save his "political legacy" after a bitter loss in domestic elections, analysts warned.

In the executive order, Trump prohibited any person subject to US jurisdiction from conducting transactions with Alipay, CamScanner, QQ Wallet, SHAREit, Tencent QQ, VMate, WeChat Pay, and WPS Office, citing a national security threat - a frequently used reason for US crackdowns on Chinese firms that Chinese officials have repeatedly called a baseless claim.

China firmly opposes the wrongdoing of the US and urges the US to stop its unreasonable suppression of Chinese apps and stop restricting the normal use of Chinese products and services in the US, China's Commerce Ministry said in response to US transactions ban on Chinese apps.

"We will resolutely support enterprises in safeguarding their rights and interests in accordance with the law and reserve the right to take necessary measures," said a spokesperson from the ministry on late Wednesday.

The specific transactions and persons involved would be identified by US Secretary of Commerce Wilbur Ross, who is directed to submit a report within 45 days, according to the executive order. In a statement on Tuesday, Ross said that he had directed the department to begin implementing the order, including identifying prohibited transactions.

Almost the same time, the US Department of State said that Assistant Secretary for Political-Military Affairs Clarke Cooper was scheduled to deliver remarks during a Political-Military Dialogue with the island of Taiwan on Wednesday via a video conference, a further provocation of China's sovereignty and territorial integrity.

"China will coordinate necessary responses according to the development of the situation and resolutely defend the sovereignty and security interests of the country," Hua noted when commenting on the US engagement with the island of Taiwan.

Despite the provocative nature of the moves, they are most symbolic steps that will have no major implications for the targeted Chinese businesses or the overall bilateral ties, Chinese analysts said.

For the ban on Chinese apps, many Chinese analysts believe it would be difficult to implement the executive order, given the limited time Trump has left in office and the potential legal challenges from users and companies. Even if the order is carried out, losses would be limited for the Chinese businesses as the apps' key market is in China and elsewhere rather than the US, analysts said.

"The Trump executive order is just a political show," Dong Shaopeng, a senior research fellow at the Chongyang Institute for Financial Studies at Renmin University of China, told the Global Times on Wednesday, adding that by sanctioning the Chinese firms, Trump is seeking to consolidate his image as the "leader in containing China" and to set up hurdles to constrain amble room for Biden's China policy.

Furthermore, it remains uncertain whether the executive order would be carried out, as Trump is expected to leave office on January 20, well before the 45-day deadline. The executive order may also face serious legal challenges before it could be implemented, as seen with Trump's previous similar executive orders.

Trump's executive order on September 20 that bans transactions with WeChat and TikTok have been blocked by US judges from taking effect. Another executive order on November 12, 2020 that bans US investors from investing in Chinese firms it deems to have links to the Chinese military is also facing confusion, as the New York Stock Exchange has been making bizarre U-turns on whether pushing delisting of three Chinese telecom companies.

A day after dropping the plan, on Wednesday night, the NYSE said it will remove US-traded shares of China Telecom, China Mobile and China Unicom from the Big Board, according to CNBC report.

The move is the second reversal of the decision that is supposed to comply to an executive order signed by Trump.

On the so-called political-military dialogue with the island of Taiwan, Chinese mainland analysts said the move is "not a surprise at all" and it's more of a symbolic show rather than one that will have any concrete strategic impact.

Li Haidong, a professor with the Institute of International Relations at the China Foreign Affairs University, told the Global Times on Wednesday that the move is part of Trump's "last madness" on US policy toward China and he wants to leave some "land mines" for president-elect Joe Biden, "but Trump has overestimated his capability."

To both protect his only "political legacy" of being "tough on China" and force Biden's hand on China policies, Trump could even take a final frenzy of drastic actions against China, on both economic and diplomatic areas, analysts said.

Such an intention is also reflected in US Secretary of State Mike Pompeo's recent comment that he regrets the US hadn't made more progress in resolving "hard issues" with China. "The regret is that the big issues, the hard issues and the trade relationship between the United States and China have not been resolved," Pompeo said, adding "That work remains to be done," the Bloomberg reported on Monday.

"This is definitely not the last one. He still has time… to undermine China-US cooperation and create trouble for the new administration," Ma Jihua, a Beijing-based independent tech industry analyst, told the Global Times on Wednesday, "The harshest thing he can do is to put Chinese firms onto an Entity List. Banning transactions is just for appearances and unlikely to be carried out."

Apart from banning and blacklisting Chinese companies, Trump could move to block any business deals between US firms and Chinese state-owned companies and technology companies, Dong said. "The craziest would be severing financial ties with China and launch a financial war," he said.

On the geopolitical front, Trump and politicians like Pompeo still have some time to make more trouble to further worsen China-US ties, such as increasing interactions with Taiwan or being more supportive to Taiwan secessionism, or sanctioning more Chinese firms, analysts said.

But US politicians should realize that "containing China is not a work remains to be done" but a "mission impossible," Lü Xiang, a research fellow at the Chinese Academy of Social Sciences in Beijing, told the Global Times on Wednesday. He said that hawkish Republican and politicians like Pompeo are unable to shut the window for the new Biden administration to fix the ties.