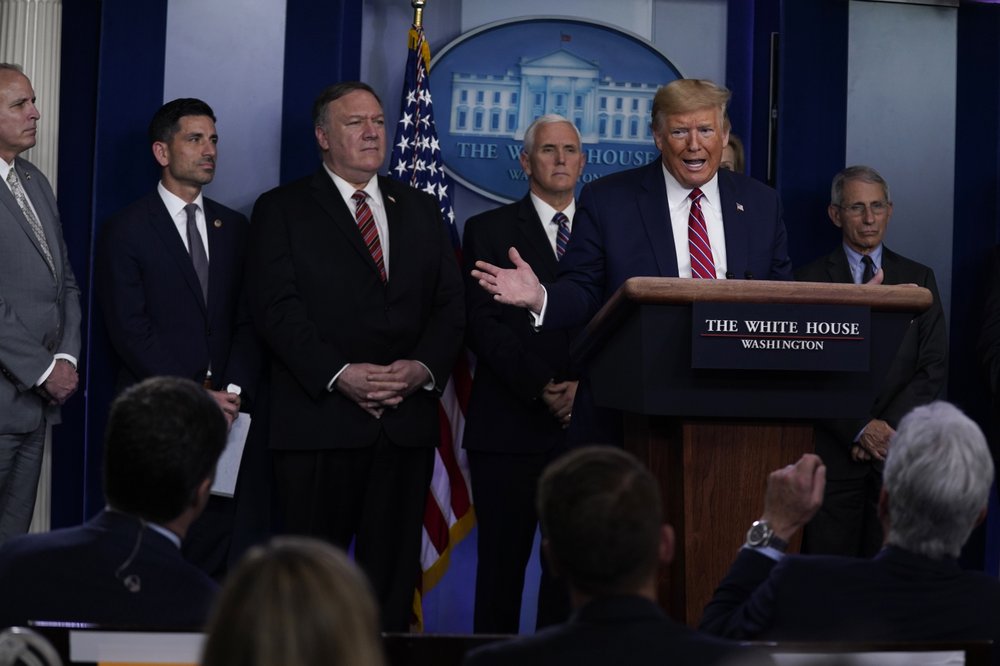 US President Donald Trump called NBC News correspondent Peter Alexander a “terrible reporter” during Friday’s White House news briefing for asking what he would say to Americans who are scared about the coronavirus.

Other reporters pushed back against Trump. Alexander later asked Vice President Mike Pence the same question — and got an answer.

The same administration that stopped a once-daily briefing session with the White House press secretary now has the president and his aides talk each day about the pandemic on live television, and early indications are that it’s a hit. Friday’s news conference, shown by the big broadcast and cable news networks for more than 90 minutes, featured an old star in a new role: Trump’s first press secretary, Sean Spicer, asked questions in his role as a television host for Newsmax.

In the last two briefings, Trump’s grievances with the media bubbled to the surface.

Following a discussion about the use of a drug as a potential treatment for the coronavirus, Alexander wondered whether that offered a false sense of hope. He asked the president what was his message to people who are frightened, which Trump sarcastically called a “lovely question.”

He told Alexander, “you ought to be ashamed of yourself.”

Four reporters — CNN’s Kaitlan Collins, ABC’s Cecilia Vega, the AP’s Jill Colvin and PBS’ Yamiche Alcindor— later challenged Trump or Secretary of State Mike Pompeo about the message it sent to be attacking the media during the coronavirus outbreak. CNN’s John King called it a “reprehensible” response to a fair question.

Alexander said he considered his question to be a “softball,” giving the president an opportunity to offer reassurance to the American people.

“I think it does sort of reveal a frustration, perhaps an anxiety of his political prospects, about a situation that is hard to keep in control as we witnessed it continue to spiral at this time,” Alexander said on MSNBC.

The attack came hours after NBC News announced that a technician in its New York office had died Thursday of coronavirus. Alexander’s boss, NBC News Chairman Andy Lack, defended the questioning as “fair, straightforward and necessary.”

Suzanne Nossel, CEO of the literary and human rights organization PEN America, said Trump’s attacks on the media have “become an appalling daily spectacle and an international embarrassment to the United States.”

“But it was off-putting for Peter to challenge Trump because POTUS said he was hopeful and optimistic about an anti-coronavirus drug,” Fleischer wrote. “There is nothing wrong with hope.”

When Pence was asked the same question, the vice president urged Americans to “be vigilant.” He said that while the risk of coming down with the illness is low, every American will need to work together to keep the country safe.

It was the second straight day that Trump had leveled his “fake news” charge at reporters in his briefing. On Thursday he looked at his questioners, who left seats empty in the briefing room in order to comply with recommendations to maintain social distance from colleagues to protect against the virus.

“You’re actually sitting too close,” said the president, who stood on a crowded podium with administration officials. “Really, we should probably get rid of about another 75, 80 percent of you. I’ll have just two or three that I like in this room. I think that’s a great way of doing it.”

Spicer’s appearance at the news conference was worth a double-take. He has recently taken a job hosting a talk show for the conservative television network Newsmax. Neither acknowledged their prior relationship.

Spicer asked two newsy questions, one about small business that he didn’t complete before Trump started talking, and the other seeking the president’s response to recent sales of stock by senators that have raised questions about potential insider trading.

One White House reporter, NBC News’ Kelly O’Donnell, later tweeted disapproval of the former press secretary sitting among journalists to ask questions of the president he once worked for.

“The door between politics and media sometimes revolves, but it is not appropriate to question one’s former boss,” she said.

Spicer said that when he was press secretary, he didn’t try to call “balls and strikes” by excluding reporters. Spicer said he asked two legitimate questions on subjects that Americans were interested in and that he was discussing on his show.

“It’s not up to another correspondent like Kelly O’Donnell to determine what’s appropriate,” he said.

Within the past week the president, who has received criticism for a slow response to the pandemic, has gathered an audience of millions on television each day in an election year to deliver his unfiltered message. Even though he’s responding to reporters, one columnist, Jennifer Rubin of the Washington Post, wrote Friday that the journalists are not assertively checking his facts.

ABC, CBS, NBC, Fox, CNN, MSNBC and Fox News Channel all aired Friday’s briefing. Trump’s campaign rallies have been put on hold due to the virus, but his briefings reach more people, many of them isolated in their homes.

For example, an audience of 8 million people watched Trump’s briefing Sunday afternoon on the three cable news networks, led by Fox News Channel. At the same time during the same Sunday a year earlier, there were 1.75 million watching those networks, the Nielsen company said.