For President Donald Trump, it was just like any other Saturday. 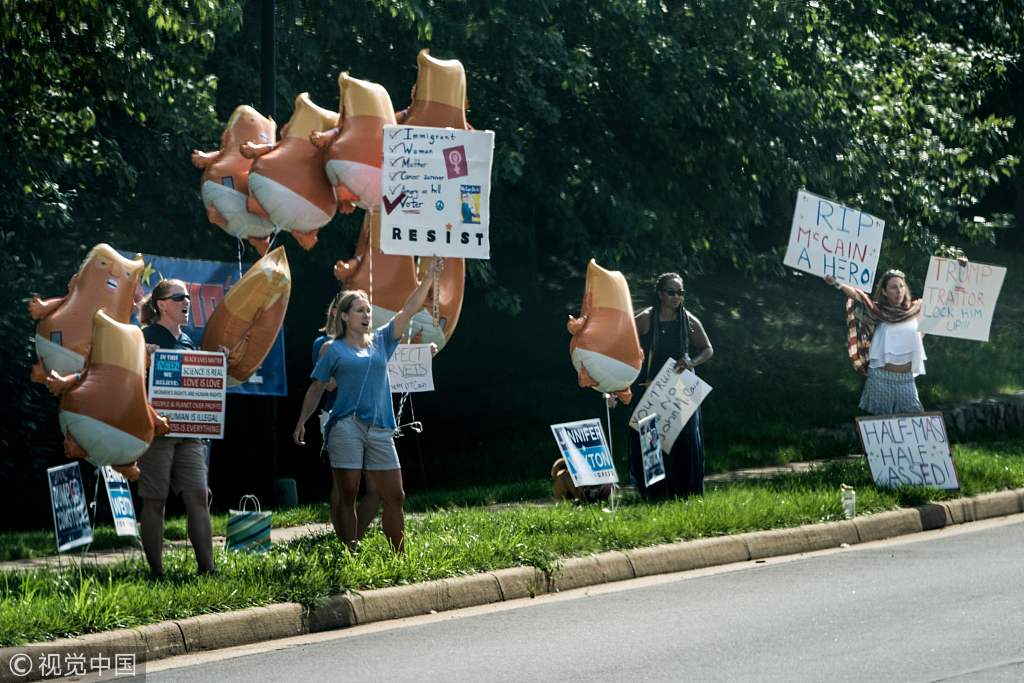 As political dignitaries gathered in Washington to memorialize Sen. John McCain, the president tweeted familiar grievances and headed to the golf course.

McCain's family had made clear the president was not welcome at the funeral for the six-term senator and decorated war veteran at the Washington National Cathedral. Seated in the pews were three former presidents, a host of lawmakers, and top officials from around the world. Speakers at the service did not mention Trump by name but repeatedly drew contrasts between McCain's record of service and the divisive politics of the day.

The White House did not answer questions about whether Trump played golf or if he watched the service from afar.

Dressed in a white polo shirt and baseball hat, Trump left the White House in the morning as the late senator's daughter, Meghan McCain, delivered an emotional address that served as a direct rebuke of Trump and his policies. The tributes still underway, the presidential motorcade whisked him to Trump National Golf Club in Sterling, Virginia.

Throughout the day, Trump tweeted gripes about trade talks with Canada and the Justice Department. By midafternoon he had not named McCain, who had been an infuriating foil in a long-running feud that did not end with the senator's illness and death. Earlier in the week, Trump drew sharp rebukes for offering a terse statement about McCain's death under pressure following two days of near-silence.

The feelings of many at the memorial were quite clear. Meghan McCain drew applause when she said, "The America of John McCain has no need to be made great again because America was always great."

As the memorial service unfolded, some Trump allies jumped to his defense.

"@realDonaldTrump ran for @POTUS ONE time and WON! Some people will never recover from that," tweeted Katrina Pierson, an adviser to Trump's re-election campaign.

Trump has frequented his golf courses in Virginia, New Jersey and Florida throughout his presidency, though the White House often will not say if he plays. Trump repeatedly blistered President Barack Obama during the 2016 campaign for golfing, telling cheering supporters that as president he'd be far too busy working for them.

"I'm not gonna have time to go play golf," he would shout.

Trump's visit to the course drew some direct commentary. When the president left his club in the midafternoon a small group of protesters greeted him. Their signs read "Lock Him Up" and "RIP John McCain, a hero."