US President Donald Trump promised that his administration would take actions to protect students, after a shooting left multiple people dead at a Texas high school on Friday. 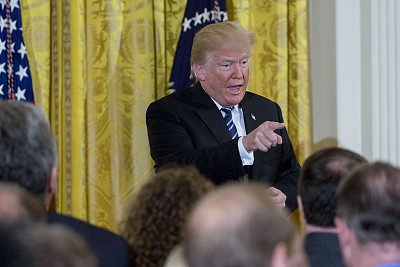 "My administration is determined to do everything in our power to protect our students, secure our schools and do everything we can to keep weapons out of the hands of those who pose a threat to themselves and to others," Trump said during an event at the White House.

"This has been going on for too long in our country," the president said. "We grieve and send our support and love to everyone affected by this absolutely horrible attack."

His remarks followed a tweet he sent on Friday morning.

Local police said that eight to ten people have been killed after a shooter opened fire inside Santa Fe High School Friday morning in the southeast of Houston.

Harris County Sheriff Ed Gonzalez told reporters that the suspect shooter was in custody and another person was detained and questioned. "Both of them are students," he said.

Santa Fe High School in Galveston County is about 54 km southeast of downtown Houston. Santa Fe is a city with a population about 13,000.

The school was on lockdown Friday.

The county is about 360 km east of Sutherland Springs, Texas, where a gunman barged into a church last November and murdered 26 people.

According to CNN, there has been one school shooting a week on average in the United States in 2018 alone.