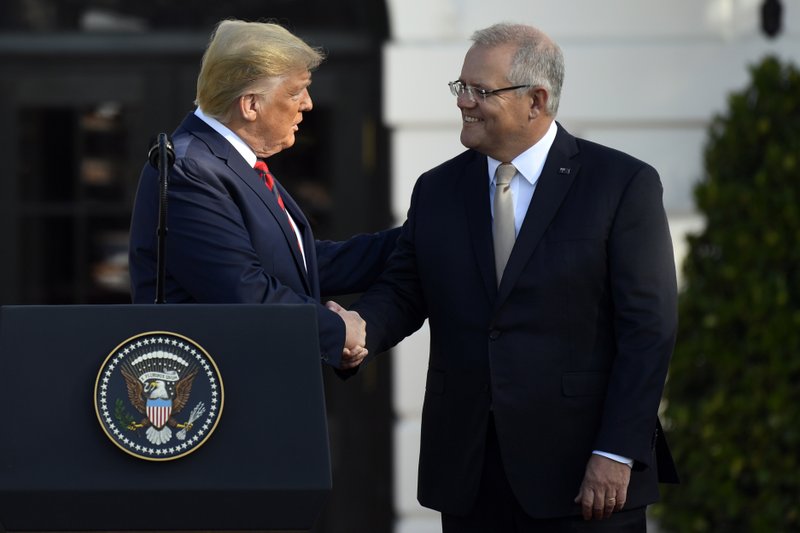 President Donald Trump says he would love to attend the 2019 President’s Cup golf tournament in Australia in December, but it depends upon what his schedule will allow.

The event features an international team competing against a United States team and is held every two years.

Trump, an avid golfer, says the PGA Tour has invited him to attend, and he described the tournament as “exciting.”

Trump spoke about the President’s Cup during a meeting Friday with Australian Prime Minister Scott Morrison, who notes he’ll talk about the event with Trump during a State Dinner in the evening.

Trump notes that golfer Greg Norman of Australia is a good friend and will also be at the White House dinner.

President Donald Trump says in a welcoming ceremony for Australian Prime Minister Scott Morrison that “today we celebrate the long-cherished and unwavering friendship between the United States and Australia.”

Trump and Morrison will participate in a day filled with meetings, a joint press conference and a lavish state dinner, the second one of Trump’s presidency.

Trump says tonight’s Rose Garden state dinner “will be quite something.”

Morrison told the president in reply, “thanks mate.”

Morrison says the Australian delegation brings with it the thanks and respect of 25 million Australians for the US.

The two leaders are seeking to demonstrate a strong alliance with Morrison saying the world is a better place with the United States and that the two nations “see the world through the same lens.”

The welcoming ceremony included Marine Band performances of the national anthem of both countries and a 19-gun salute and inspection of troops.

Morrison is just the second world leader to be granted the high diplomatic honor of a state visit during the Trump administration.

The leaders will meet for talks and face journalists at a joint news conference in the White House East Room. Morrison will also be treated to lunch at the State Department.

They will cap the night with an opulent state dinner beneath the stars in a Rose Garden arrayed in shades of green and gold in tribute to his Australia’s national colors.