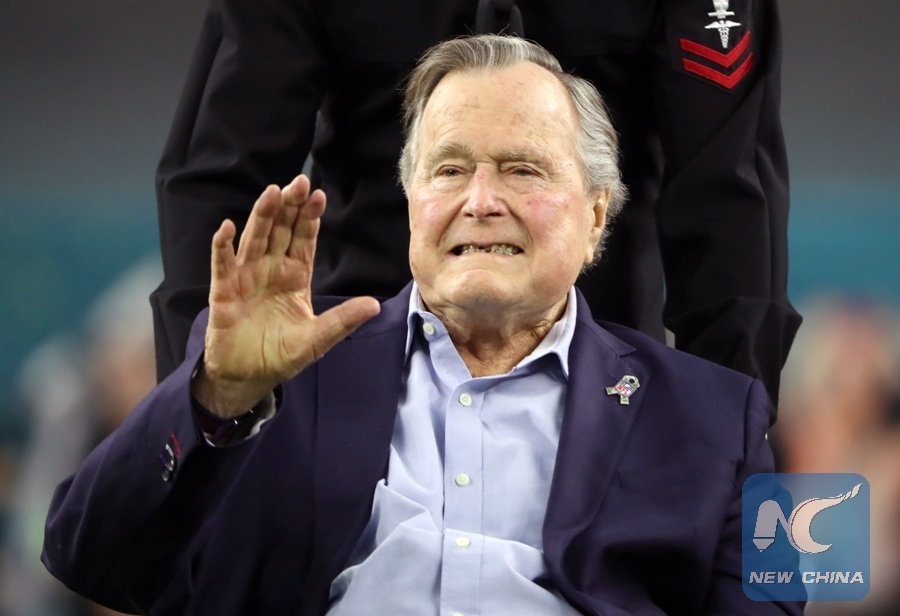 File Photo: Former U.S. President George H.W. Bush arrives on the field to do the coin toss ahead of the start of Super Bowl LI between the New England Patriots and the Atlanta Falcons in Houston, Texas, U.S., Feb. 5, 2017. (Xinhua/REUTERS)

In a statement issued hours after Bush's death on Friday night, the Trumps said that Bush had "inspired generations of his fellow Americans to public service."

The White House announced Saturday morning that the Trumps would attend a state funeral for the former president at Washington's National Cathedral.

"President Bush guided our nation and the world to a peaceful and victorious conclusion of the Cold War," the Trumps wrote. "As President, he set the stage for the decades of prosperity that have followed."

"And through all that he accomplished, he remained humble, following the quiet call to service that gave him a clear sense of direction."

The Trumps were informed of Bush's death late Friday while in Buenos Aires, Argentina, for the Group of 20 summit of rich and developing nations.

Trump, who upended the GOP establishment with his insurgent presidential campaign, has had a fractious relationship with the Bush family over the years. He ran against one of Bush's sons, Jeb Bush, in the GOP presidential primaries in 2016, and he was sharply critical of the presidency of another son, George W. Bush.

Trump was set to speak by phone Saturday with George W. Bush, White House press secretary Sarah Sanders said, to "offer his condolences on behalf of himself, the first lady, and the entire country." He will also designate Wednesday as a national day of mourning.

In August 2015, Trump tweeted a dig at the presidency of George H.W. Bush, writing: "The last thing we need is another Bush in the White House. Would be the same old thing (remember "read my lips, no more taxes"). GREATNESS!"

Those harsh assessments were set aside in the Trumps' statement on Saturday.

They wrote that those whom Bush had inspired to public service were "illuminating the greatness, hope and opportunity of America to the world."

Trump, the 45th president, paid tribute to "the life and legacy of 41."