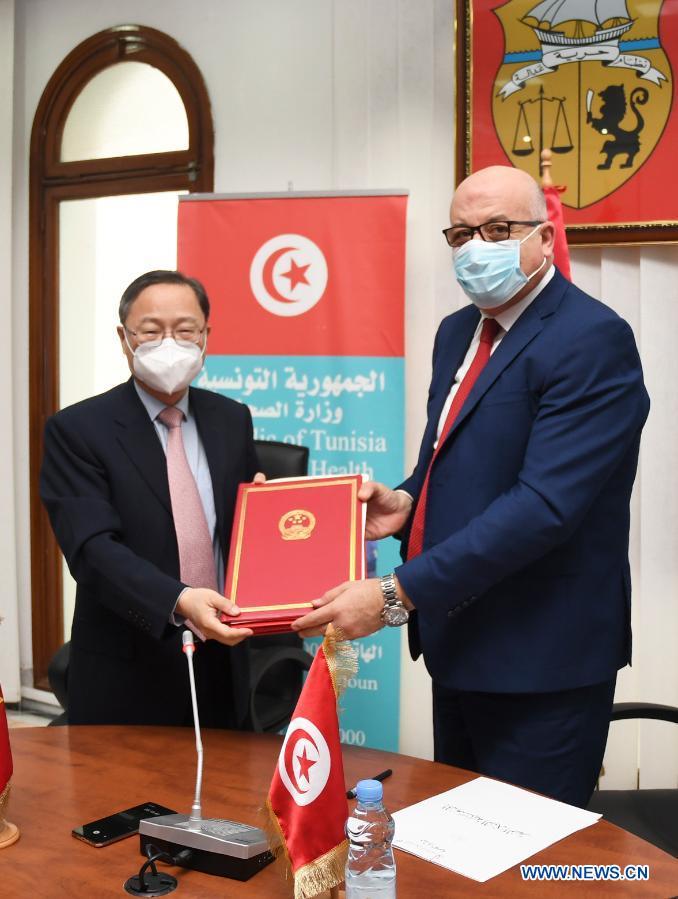 Tunisian Minister of Health Faouzi Mehdi (R) and China's Ambassador to Tunisia Zhang Jianguo attend a signing ceremony for the agreement on the delivery of a new university hospital in Tunis, Tunisia, on Dec. 9, 2020. The new university hospital in southeastern Tunisia's Sfax Province will be transformed into a national center for the care and treatment of patients suffering from COVID-19, according to Mehdi. (Photo: Xinhua)

TUNIS, Dec. 9 (Xinhua) -- The agreement on the delivery of a new university hospital in southeastern Tunisia's Sfax Province was signed between Tunisian and Chinese officials on Wednesday.

The signing ceremony was co-chaired by Tunisian Minister of Health Faouzi Mehdi and China's Ambassador to Tunisia Zhang Jianguo at the headquarters of the Tunisian health ministry.

At his inaugural speech, the Chinese ambassador said that the construction of the hospital has been very important since the establishment of diplomatic relations between the two friendly countries.

"This is an exemplary cooperation between Tunisia and China," Zhang said, adding that for decades, China has dispatched medical workers to Tunisia, who worked hand in hand with Tunisian doctors.

"We will have a bright future of cooperation, not only in the fight against COVID-19 but also in the field of scientific research, such as a vaccine against this pandemic," Zhang said.

For his part, the Tunisian minister expressed his satisfaction with the collaboration between Tunisia and China for years.

"The construction of the hospital is a real achievement which allows the development of health services, provided to the inhabitants of Sfax as well as to those of neighboring provinces," Mehdi told Xinhua.

According to the minister, the new hospital, funded by China, "is a source of pride for all Tunisians... it will be inaugurated on Thursday by President Kais Saied."

"The new university hospital in Sfax will be transformed into a national center for the care and treatment of patients suffering from COVID-19, under the control of the Ministry of National Defense," Mehdi added.