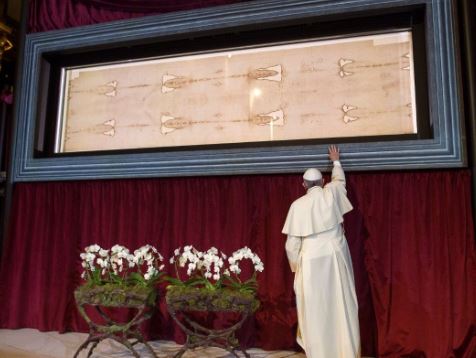 Public display of the Shroud of Turin on Saturday, Apr. 11, 2020 at the Vatican, Italy. (Photo: vaticannews.va)

The Turin Shroud, a burial cloth some believe covered Jesus and which has links to a 16th-century plague in northern Italy, was put on special view for faithful worldwide through video streaming on Holy Saturday to inspire hope amid the coronavirus pandemic.

Pope Francis has hailed the initiative by the Turin archbishop, saying making it visible meets the requests of the faithful who are suffering through the COVID-19 outbreak. Archbishop Cesare Nosiglia says he received thousands of requests from persons young and old to be able to view it remotely.

The linen, kept behind bulletproof glass in a Turin chapel, is shown to the public only on very special occasions.

As a TV camera showed the 14-foot-long (four-meter-long) cloth in its showcase, Nosiglia opened prayers, noting Holy Saturday marks the wait for Easter, when Christians believe Jesus rose from the dead. He said people today “await to be liberated from the pandemic” causing so many deaths, and said the shroud “opens hearts to faith and hope.”

The archbishop read aloud a letter from Francis, in which the pontiff expressed appreciation for “this gesture, which meets the request of the faithful people of God, so harshly proved by the coronavirus pandemic.”

Francis also wrote that “in the face of the man of the shroud, we see also the faces of so many ill brothers and sisters, especially those more alone, and those less cared for, but also all the victims of wars and violence, of slavery and of persecution.”

Nosiglia then pressed one of his hands against the glass case and prayed before the cloth.

Hours later, Saturday night at the Vatican, Francis was scheduled to lead an Easter vigil Mass in St. Peter’s Basilica, without the rank-and-file as part of coronavirus containment measures.

In the 16th century, Milan’s archbishop, the future St. Charles Borromeo, intensely desired to pray before the shroud while that city was ravaged by plague. The Duke of Savoy, in 1578, decided to bring the burial cloth of Christ from Chambéry, in France, to Turin, according to a Vatican account of that period.

Charles made the pilgrimage to Turin on foot, praying and fasting during the journey.

Skeptics say the linen bearing the figure of a crucified man is a medieval forgery. Believers regard it as one of Christianity’s most awe-inspiring reminders of Jesus’ crucifixion.

The cloth belongs to the Vatican, which has allowed its scientific testing.

The linen was part of Crusader booty taken from what was then called Constantinople to France in 1353.

Among the only three lay dignitaries in the chapel Saturday, all of them wearing protective masks, was Turin Mayor Chiara Appendino.