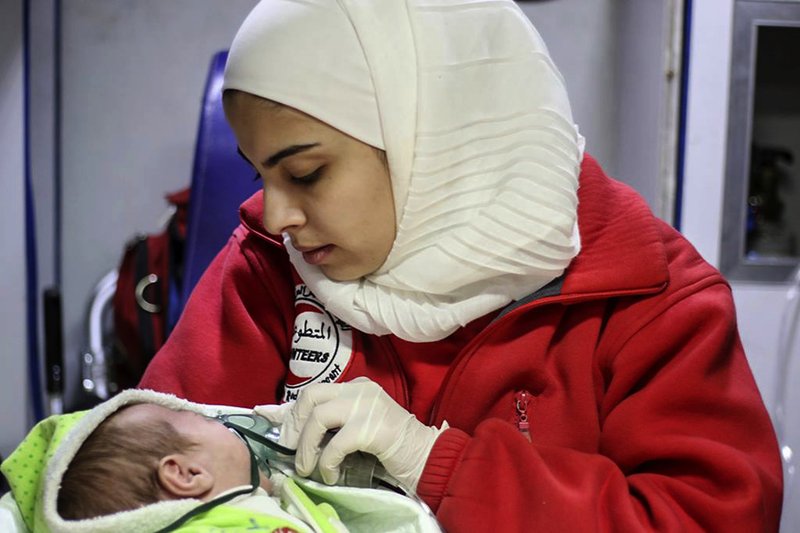 The military said in a brief statement that the siege of Afrin, the main town in the enclave of the same name, had begun on Monday. It said the military took control of “critical areas” of the town but did not provide details.

Thousands of people fled Afrin on Monday as the Turkish troops got closer to the town, heading toward nearby areas controlled by the Syrian government. Syria’s Al-Ikhbariya TV showed vehicles and trucks loaded with civilians leaving the town.

Residents reported that some relatives came under fire as they attempted to use the road out of the enclave. Panic spread among civilians as the Turkish-backed forces approach the town that now houses hundreds of thousands, including those displaced from earlier fighting. There was no water after Turkish forces seized control of the local dam, and residents say they have relied on water wells for their consumption.

“As my relatives tried to get out of Afrin yesterday, they got fired at. They are ok. Thank God,” said 32-year-old Azad Mohamed, who said he is staying in his house for now.

Mohammed said he can’t decide whether to take his two children out of Afrin and risk them getting fired at or stay in the town as Turkish forces are now at its entrance from the east.

“I spend most of the time standing up, I swear to God, like a madman. Every time I sit down for two minutes, I get up again and start pacing to ease the tension,” he told The Associated Press in a series of text messages from the town. “Every time I think they are closer, and I think of my wife and kids and parents. I am afraid and I feel like there is a volcano in my belly.”

Turkey launched a military offensive into the border enclave on Jan. 20 to drive out Syrian Kurdish forces that it considers to be “terrorists” and an extension of Kurdish rebels fighting inside Turkey.

A top Syrian Kurdish official, Fawza Yousef, said Syrian government border guards deployed along the border with two government-held villages to the southeast of Afrin, Nubl and Zahraa, to protect them. She described intense Turkish shelling of Afrin town. “We expect Turkey to invade the town,” Yousef said.

Meanwhile on Monday, dozens of civilians evacuated the rebel-held Damascus suburb of eastern Ghouta, arriving on foot and in buses to an army checkpoint set up by the Syrian and Russian militaries.

Russian news agencies said at least 100 civilians have been evacuated from eastern Ghouta, including 20 women and children. The Syrian government and the Russian military have set up a corridor outside eastern Ghouta to arrange the evacuation from the area, which is home to some 400,000 people.

Syrian government forces have split eastern Ghouta into three separate rebel-held pockets amid rapid advances in the past few days, dealing a major blow to the rebels.

The largest rebel group in eastern Ghouta, the Army of Islam, vowed in a statement to stay in the area and fight advancing government forces until the end.

The Army of Islam’s statement came hours after it said it had reached an agreement with government-allied Russian forces to evacuate the wounded from the enclave. Its statement said the deal with the Russians was reached through the United Nations.

Syrian TV showed some people arriving at the Wafideen crossing with government-held territory, including a man walking on crutches and a woman who said she has been waiting for more than a year to evacuate her sick child. The TV also showed an older man being carried while on a wheel chair before boarding an ambulance. Another woman was held as she could hardly walk.

Hamza Bayraqdar, Army of Islam’s chief military spokesman, said in a video statement posted online that “our revolutionary ideology does not allow us to sell the blood of the holy warriors who liberated Ghouta.”

Speaking if his fighters, he added that “we will stay in our Ghouta to defend it until we achieve one of two good things,” he said using an Islamic term that means either “victory or martyrdom.”

Eastern Ghouta’e residents have survived harsh condition because of bombardment and lack of food due to a monthslong government siege. Opposition activists say that since the latest wave of bombings and the government ground offensive began, more than 1,100 civilians have been killed in the enclave.

The Observatory and the opposition’s Syrian Civil Defense reported a wave of airstrikes and shelling Tuesday morning on the towns of Saqba, Jisreen, and Kfar Batna, killing and wounding more than 20 people.

Meanwhile, the Syrian government said the military has seized control of the Qadam district south of the capital Damascus after it was evacuated by militants and civilians. The government-run Central Military Media said buses and vans carrying more than 1,000 people left for the northern province of Idlib in implementation of a previous agreement between the army and the gunmen who controlled the Qadam district.

They include more than 300 militants from the extremist Ajnad al-Sham group and their families.