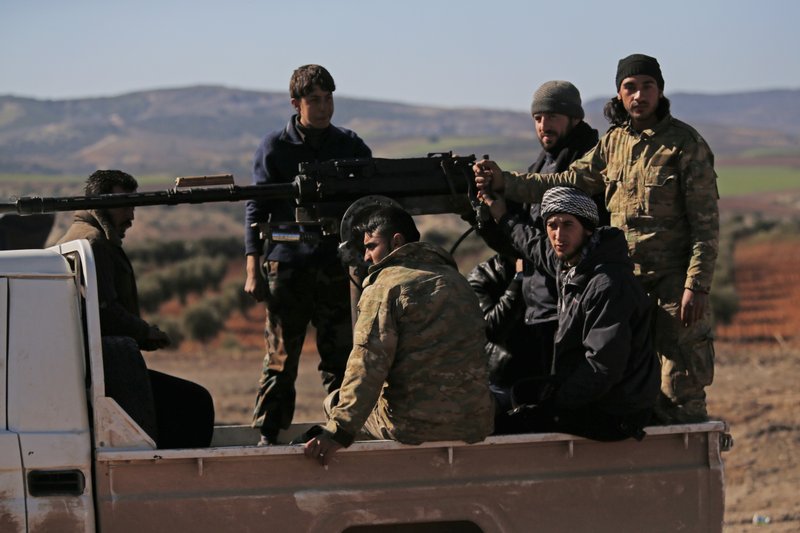 This Saturday, Jan. 27, 2018 file photo, Turkey-backed opposition fighters of the Free Syrian Army secure a checkpoint at the village of Maarin, on the outskirts of the northwestern city of Azaz, Syria. (Photo: AP)

DAMASCUS, Dec. 25 (Xinhua) -- The Turkey-backed rebels in northern Syria received orders Tuesday from their Turkish backers to brace for an imminent Turkish military campaign against Kurdish militia in the city of Manbij, a war monitor reported.

The Turkish forces gave orders to the rebels in the northeastern countryside of Aleppo to raise the level of readiness and brace for a military campaign that could be launched within hours, according to the Syrian Observatory for Human Rights (SOHR).

The campaign will start in the city of Manbij in the northern countryside of Aleppo province in northern Syria, the SOHR said.

The residents in Manbij are on alert as well as the Kurdish-led Manbij Military Council.

The war monitor, based in the United Kingdom, said the Turkey-backed rebels have started a media war ahead of the Turkish assault, by disseminating news about the Turkish plan.

The U.S. forces in Manbij are patrolling areas near the frontline with the Turkey-backed rebels on the western outskirts of the city.

The SOHR said Manbij is on high alert among the Kurdish-led militia as well as the Turkey-backed rebels in that part of the country.

Turkey has for long urged the withdrawal of the Kurdish militia of the People's Protection Units (YPG) from Manbij.

Turkey regards the YPG and their allied Syrian Democratic Forces (SDF) as separatists and terrorists, due to their links with the Turkey-banned Kurdistan Workers Party (PKK).

However, the US-led anti-terror coalition has been backing the Kurdish militia in several battles against the Islamic State (IS) in key areas of northern Syria, mainly the former IS de facto capital of Raqqa.

Turkish President Recep Tayyip Erdogan has recently said that his forces and allied rebel fighters in Syria would launch a campaign against the Kurdish militia in the eastern side of the Euphrates river in eastern Syria and in Manbij. Enditem