Turkey becomes hardest-hit country of COVID-19 in Mideast; Iran warns of another coronavirus peak in autumn 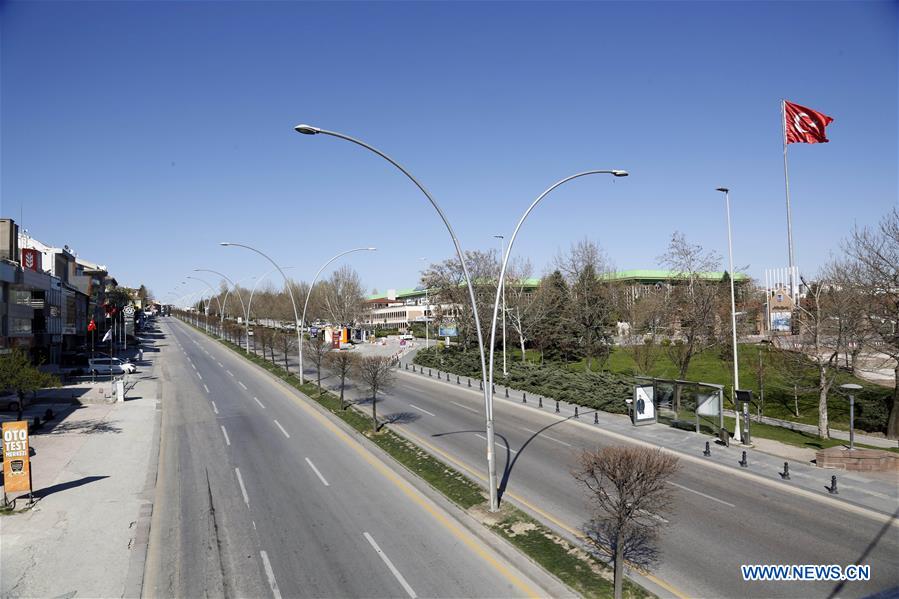 CAIRO, April 18 (Xinhua) -- Turkey on Saturday surpassed Iran in the tally of total infections of COVID-19 as the confirmed cases in the country exceeded 82,000.

Meanwhile, an Iranian health official warned of another rise of the COVID-19 pandemic in autumn as the country's confirmed infections also surpassed 80,000 on Saturday.

Turkey's COVID-19 cases on Saturday surged to 82,329 after 3,783 new cases were confirmed, becoming the hardest-hit country of the novel coronavirus in the Middle East.

The death toll of the virus reached 1,890 in the country after 121 new deaths were added, said Turkish Health Minister Fahrettin Koca.

A total of 10,453 patients have recovered since the outbreak of the virus in the country in mid-March.

Turkish President Recep Tayyip Erdogan on Saturday inspected the construction zones of two COVID-19 hospitals in Istanbul from the air by a helicopter which are expected to provide full capacity service with its 1,008 beds each when completed.

In Iran, 1,374 new cases from the coronavirus were confirmed, raising the total number of the infected cases to 80,868 while the tally of deaths increased to 5,031, up by 73 from a day ago.

Iranian President Hassan Rouhani on Saturday urged the health authorities to outline the conditions for the reactivation of "medium-risk" businesses as the country's infection pace has slowed down recently.

However, Iran's Deputy Health Minister Iraj Harirchi warned that the COVID-19 pandemic could see another rise in autumn.

"We are expecting a further spread of the virus again in autumn and we predict that a peak in influenza cases will also happen concurrently," Harirchi was quoted by Financial Tribune daily as saying.

Israel, another hard-hit country in the region, reported 283 new confirmed cases, bringing the tally of coronavirus infections to 13,265.

The death toll from the virus in Israel increased by 13 to 164 while the recoveries rose by to 3,456.

Israeli Prime Minister Benjamin Netanyahu announced on Saturday the ease of restrictions on the activity at workplaces, expanding public transport and reopening certain stores to restore the economy.

Saudi Arabia announced on Saturday the registration of 1,132 new cases of the coronavirus and five new deaths, making the total number of the confirmed cases to 8,274 and the death toll to 92.

So far, the total number of recoveries in the country has reached 1,329.

Meanwhile, Egypt reported 188 new COVID-19 cases, the highest daily increase, bringing the tally of confirmed cases in the country to 3,032.

The Egyptian Health Ministry also reported 19 deaths and 55 cases of recoveries, increasing the death toll to 224 and the total number of recoveries to 701.

In Palestine, six new cases of the novel coronavirus were confirmed in its territories, bringing the total number to 418.

Three Palestinians so far have died from COVID-19, including two women from East Jerusalem and one man from Tulkarem, said the Palestinian Health Ministry.

Kuwait reported 93 new cases and one more death on Saturday, bringing the total number of confirmed infections to 1,751 and the death toll to six and 280 patients have recovered.

In Lebanon, the number of COVID-19 infections increased by four to 672, while the death toll remained at 21 and 94 patients have recovered so far.

Iraq confirmed 31 new coronavirus cases, bringing the total number of infections to 1,513, of whom 82 have died and 953 recovered.

Algeria decided to extend the nationwide lockdown by 10 days until April 29, as infections from the novel coronavirus keep growing and reached 2,534 on Saturday.

Morocco's confirmed COVID-19 cases increased by 121 to 2,685, which included 137 fatalities and 314 recoveries amid which the country decided to extend the state of medical emergency until May 20.

Oman's Ministry of Health announced 111 new cases of infections, bringing the total number of the coronavirus cases in the country to 1,180, including six deaths and 176 recoveries.

The Syrian Health Ministry said on Saturday that 38 people in the country have tested positive for the novel coronavirus, of whom five have recovered while two have died.

As many as 2,115 Syrians have attended medical isolation for suspected COVID-19 cases since February.

The total number of the coronavirus cases in Sudan has risen to 66 on Saturday after 30 new cases were added, the highest in a single day since the virus outbreak in the country.

The death toll of the coronavirus in the country increased to 10.