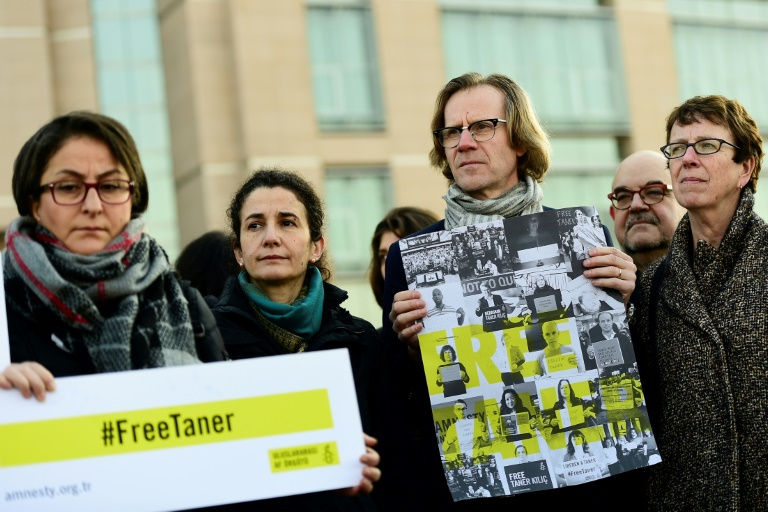 Activists gathered at the Istanbul courthouse gathered in support of Kilic. Photo: AFP

An Istanbul court on Wednesday ordered the release of the head of rights group Amnesty International in Turkey, who had been held on terror charges that his supporters long dismissed as "baseless".

The decision to release Taner Kilic under judicial control was met with thunderous applause. His friends wept and hugged other activists who attended the hearing, an AFP correspondent in the courtroom reported.

Kilic, who had been arrested along with 10 other rights activists, was being tried on terror charges that Amnesty branded "baseless allegations".

"It is an enormous relief that Taner will soon be back with his wife and daughters, sleeping in his own bed for the first time in almost eight months," said Gauri van Gulik, Amnesty's Europe director.

Kilic was detained in June 2017, suspected of membership of the group led by US-based Muslim preacher Fethullah Gulen, whom Ankara accuses of orchestrating a July 2016 coup bid -- a charge the cleric denies.

The other 10 activists, including a German and a Swede, were released last year, though their trial continues.

They had been detained following a raid on a digital information workshop that they were holding on an island off Istanbul, accused of links to Gulen and other outlawed groups, including the Kurdistan Workers' Party (PKK), which has waged a three-decade insurgency against the state.