ANKARA, Oct. 7 (Xinhua) -- Turkey has decided to launch a military campaign in the east of Euphrates to clear the area from "terrorists" and resettle refugees, Turkish officials said on Monday, after the White House announced not to support or get involved in the operation. 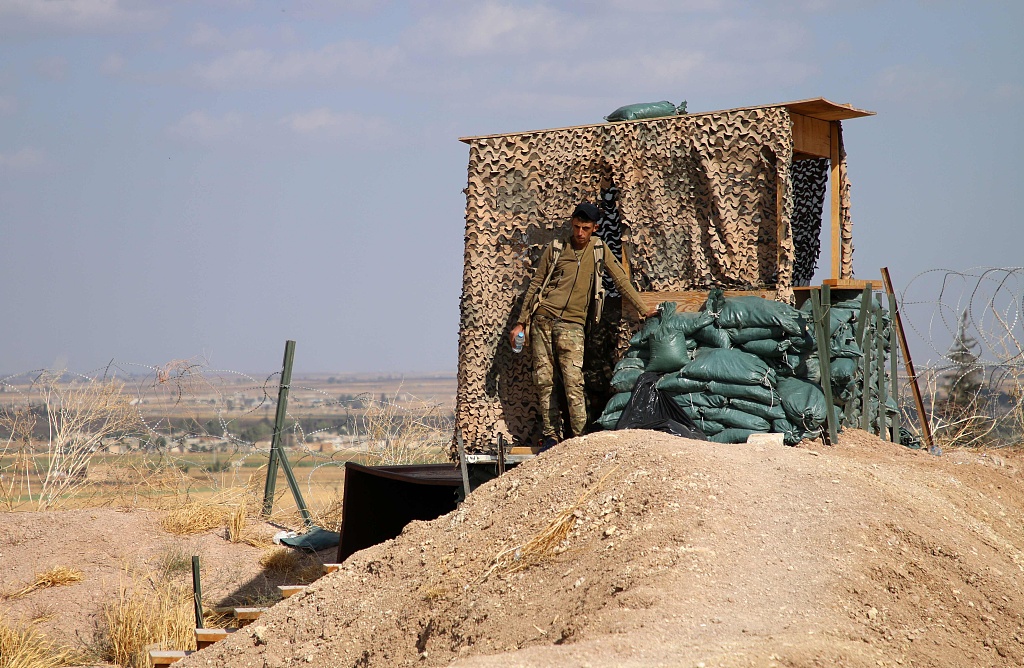 A fighter with local armed forces allied with the Kurdish administration stands guard at a military base from which US forces pulled out, in the town of Tel Arqam in Syria's Hasakeh province near the Turkish border on October 6, 2019. (Photo: VCG)

Turkey has already made its decision for clearing northern Syria from "terrorist," Turkish President Recep Tayyip Erdogan said on Monday, vowing to launch a military campaign into the east of Euphrates at any moment.

He announced that American troops have started withdrawing from northern Syria after he held a phone conversation with his U.S. counterpart Donald Trump late on Sunday.

"The withdrawal (of the U.S. troops) started after our conversation at night," Erdogan said, without elaborating on the details of a possible military incursion of Turkish Armed Forces into Syria.

The military delegations of the U.S. and Turkey on the field are in discussions, the president said.

In addition, Turkish senior officials said that a military operation to set up a safe zone in Syria does not aim at territorial gain, but for clearing "terrorists" there.

Earlier on Monday, Turkey's Presidential Spokesman Ibrahim Kalin said the safe zone in northern Syria had two aims: to clear "terrorist elements" from the border and to return refugees safely to Syria.

Turkey was not after territorial gain in any country, he stressed, saying "Turkey is powerful and determined."

"Since the beginning of the crisis in Syria, we have supported the territorial integrity of this country, and we will continue to support it," Turkish Foreign Minister Mevlut Cavusoglu said on his Twitter account on Monday.

"We are determined to ensure the survival and security of our country by clearing the region from terrorists. We will contribute to peace and stability in Syria," the minister added.

Meanwhile, the Syrian Democratic Forces (SDF) blamed Washington for not keeping its promise by deciding to withdraw from the region.

"Despite the security mechanism deal and following destruction of fortifications, U.S. forces did not fulfill their responsibilities and began withdrawing from the border, leaving the area to turn into a war zone. But SDF is determined to defend northeastern Syria at all costs," Mustafa Bali, the spokesperson of the SDF, said on Twitter.

On Sunday, the White House said that the U.S. began withdrawing its troops from Syria's border with Turkey and clear the way for an expected Turkish incursion. There are nearly 1,000 U.S. troops in northern Syria.

"Turkey will soon be moving forward with its long-planned operation into northern Syria," White House Press Secretary Stephanie Grisham said in a statement, noting that the U.S. would not intervene in a Turkish offensive.

U.S. forces "will not support or be involved in the operation" and "will no longer be in the immediate area," said the statement.

It added that Turkey will take custody of the foreign fighters captured in the U.S.-led campaign against the Islamic State (IS) that has been held by the People's Protection Units (YPG).

Erdogan said that the United States does not want to bear the burden of the captured IS members. The U.S. and Turkey are working separately on "what steps can be taken" to repatriate the imprisoned foreign fighters.

The Turkish president said that he plans to meet Trump in Washington in November.

The Turkish President has previously warned of a Turkish military operation into the east of Euphrates River to clear the area from the Kurdish fighters, but suspended its plans after agreeing with the United States to set up a "safe zone" inside Syria's northeastern border with Turkey.

The YPG, which controls the east of the Euphrates, was a key partner of the United States in the fight against the IS, but Ankara considers it as a "terrorist" offshoot of the outlawed Kurdish Workers' Party (PKK) in Syria.

On Aug. 7, Turkish and U.S. officials agreed to set up a safe zone and develop a "peace corridor" in northern Syria which would address Ankara's security concerns and the resettlement of Syrian refugees currently living in Turkey.

However, Turkey has been dissatisfactory about the slow progress of the implementation of the plan, and accused Washington of stalling the process.