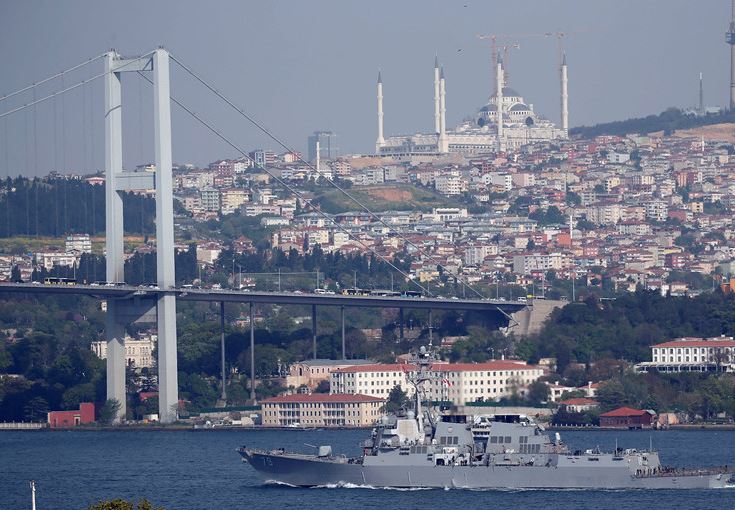 The US Navy's guided-missile destroyer USS Oscar Austin (DDG 79) sets sail in the Bosphorus, on its way to the Black Sea, in Istanbul, Turkey, May 5, 2017. (Photo: Xinhua)

ANKARA, Nov. 2 (Xinhua) -- Pushing to develop its own missile systems along with making a number of high-profile deals, Turkey has started work for its first indigenous long-range air defense system Siper, the country's president announced.

The first delivery of the missile system is expected at the end of 2021, Turkish President Recep Tayyip Erdogan said on Oct. 31 at the opening ceremony of the National Technology Development Infrastructures.

Turkey has decided for domestic production of this system last year, a Turkish official told Xinhua on condition of anonymity.

The new project will be developed on the knowhow of the ongoing indigenous Hisar short and medium-range surface-to-air missile systems which are being developed by the Turkish companies Aselsan and Roketsan since 2007, the official said.

Siper will be developed with higher altitude compared to Hisar, according to the official who noted that the new project will have almost 90-kilometer range and will provide protection against air vehicles along with ballistic missile systems.

Hisar missiles, still on the testing phase, are defense weapons developed to protect military bases, ports, facilities and troops against air-based threats along with the needs of the Turkish Armed Forces for a low and medium-altitude air defense security system.

In 2012, Ankara requested air defense support from NATO against threats posed by missiles from Syria.

Turkey, which has been relying on Patriot batteries from NATO for its air defense since the crisis in its neighboring Syria, has been looking to procure its own system for years.

Turkey aims to meet its defense requirements on its own and Siper systems will be a flag project among other domestic productions, an expert said.

Aselsan said on Jan. 16 that it had signed a business partnership along with defense company Roketsan, an agreement for a national long-range defense system project for Turkish Undersecretariat for Defense Industries, but the name of the project is newly revealed, according to Mevlutoglu.

In its statement, the company told the Istanbul Stock Exchange that Aselsan's share under the agreement was 869 million Turkish liras ($227 million) and 279.3 million euros ($342 million) and that the deliveries would be completed in 2021.

The technical specifications of the system have not been revealed yet, but Siper will cover an extended one compared to Hisar defense systems and will target threats both from air and ballistic missiles, the expert said.

"These kind of systems are provided not to protect along a border, but to protect valuable targets deployed in a way to complement each other's coverage zone," Mevlutoglu added.

This long-range missile defense system is different from the joint project that Turkey has been conducting with Eurosam, the expert stated.

On 2018, Turkey has awarded Franco-Italian consortium Eurosam, Aselsan and Roketsan a contract for a study into the future of a long-range air and missile defense system.

Scheduled to last 18 months, this study aims at preparing the development and production contract for a future system and could pave way for the launch of a three-country joint long-range air and missile defense program.

This is a feasibility study, Mevlutoglu said, adding that production of Siper is different from the scope of this study, at least at the moment.

However, NATO is critical of Turkey's purchase of the Russian-made system, as it is believed to be incompatible with the systems used by the alliance.