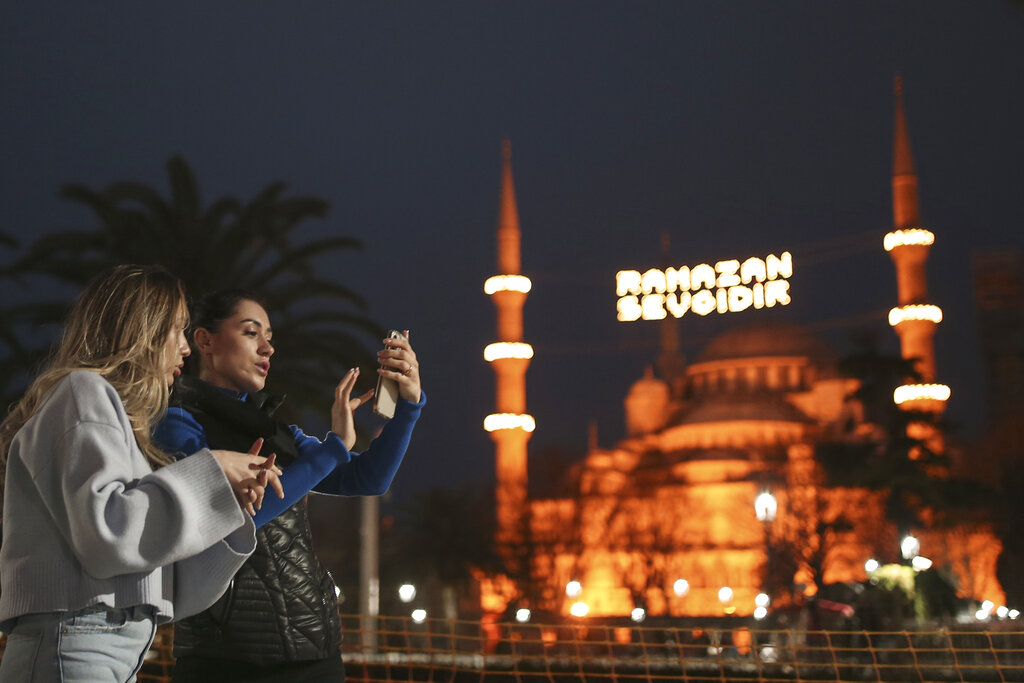 People stand near the iconic Sultan Ahmed Mosque, better known as the Blue Mosque, decorated with lights and slogan reading “Ramadan is love,” marking the month of Ramadan, in the historic Sultan Ahmed district of Istanbul Tuesday, April 13, 2021. As Muslims around the world began marking Ramadan Tuesday, in mostly-Muslim Turkey, the month of fasting kicked off with some restrictions amid record levels of COVID-19 infections. (Photo: AP)

"There might be a fall of nearly 500,000 in tourist numbers," Ersoy was quoted as saying by NTV.

The minister said no problems have been observed with summer bookings so far, and the end date of the ban could be brought forward depending on the decrease in COVID-19 case numbers.

On Monday, Russia decided to reduce the number of regular and charter flights with Turkey from April 15 to June 1 to curb the spread of the pandemic.

Turkish Foreign Minister Mevlut Cavusoglu, meanwhile, said a Russian delegation would visit Turkey in the upcoming period to observe the pandemic-related measures in the field, according to press reports.

Despite a mass COVID-19 inoculation drive launched in mid-January in Turkey, the daily cases hit a record high of more than 59,000 on Tuesday.

Turkey has imposed a "partial closure" for the first two weeks of the Muslim holy month of Ramadan to curb the infections surge. The new measures will take effect on Wednesday evening. Enditem