Turkey moves ahead with its threats to send refugees to EU 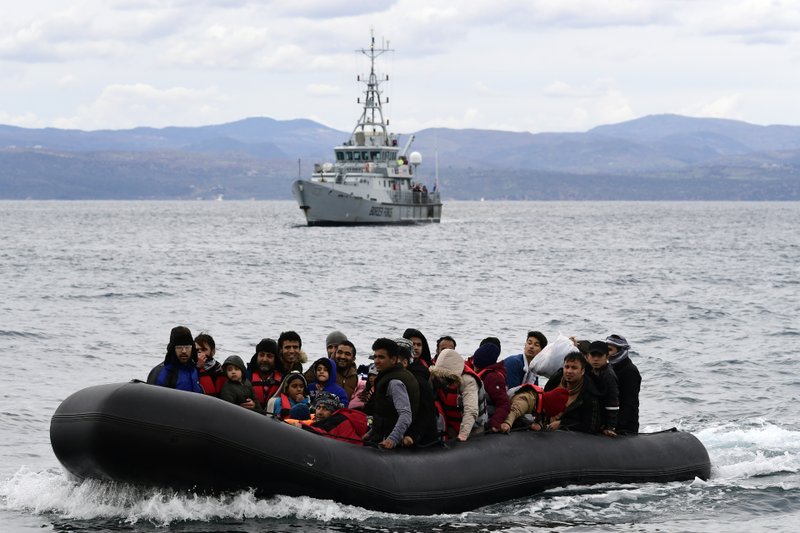 Migrants arrive with a dinghy accompanied by a Frontex vessel at the village of Skala Sikaminias, on the Greek island of Lesbos, after crossing the Aegean sea from Turkey, on Friday, Feb. 28, 2020. (Photo: AP)

Hundreds of refugees and migrants in Turkey have begun heading for the country’s land and sea borders with Greece, buoyed by Turkish officials’ statements indicating they will not be hindered from crossing the frontier to head into Europe.

The move comes a day after a deadly Syrian airstrike that killed more than 30 Turkish troops in Idlib, Syria, where Turkey has been engaged since 2016.

WHO ARE THE REFUGEES OR MIGRANTS IN TURKEY?

Turkey currently hosts about 3.6 million Syrian refugees. In 2016, it agreed with the European Union to step up efforts to halt the flow of hundreds of thousands of refugees who headed from its shores into Greece in 2015, in return for funds to support the refugees.

Apart from the Syrian refugees registered in Turkey, the country has also been a staging ground and transit point for many people from the Middle East, North Africa and central Asia hoping to head to Europe. Its coastline’s proximity to Greek islands, and the country’s land border with EU member Greece, have made it one of the preferred routes into the EU for those fleeing war and poverty at home.

Turkish President Recep Tayyip Erdogan has frequently warned he could open Turkey’s borders and allow refugees into Europe — a threat often made during periods of tense relations with EU countries.

Last September, he threatened to allow Syrian refugees to leave for western Europe unless a so-called “safe zone” was established inside Syria.

“We will be forced to open the gates. We cannot be forced to handle the burden alone,” he said at the time, accusing the EU of failing to share the burden of caring for those displaced from Syria.

“Hey, European Union!” he said. “Come to your senses. I repeat: Don’t call this an invasion, it’s not. If you persist, we will open the gates and send 3.6 million refugees your way.”

Erdogan’s threats have not been solely about refugees. In November, angered by an EU decision to impose sanctions on Turkey over its drilling for gas in the Mediterranean off the ethnically divided island nation of Cyprus, he warned he could send Europe Islamic State group prisoners held in Turkey.

“You should revise your stance toward Turkey, which at the moment holds so many IS members in prison and at the same time controls those in Syria,” he said. “These gates will open and these IS members who have started to be sent to you will continue to be sent. Then you can take care of your own problem.”

PEOPLE HEAD TO THE BORDER

On Friday, a day after the airstrike that killed Turkish troops in Syria, Turkey appeared to be ready to make good on its threat to open the gates.

The country is “no longer able to hold refugees,” said Omer Celik, a spokesman for Erdogan’s ruling party.

Turkey’s foreign ministry spokesman, Hami Aksoy, warned that the movement of refugees and migrants westward could continue if the situation in Idlib deteriorates.

“Some asylum-seekers and migrants in our country, worried about developments, have begun to move toward our western borders,” he said. “If the situation worsens, this risk will continue to increase.”

Hundreds of refugees were headed to Greece’s land border, where an estimated 450 people crossed into no-man’s land at the Kastanies crossing and were stopped at the Greek border. Greek police used tear gas and flash grenades briefly to move them back, and temporarily shut down the crossing.

Hundreds more were reportedly heading to the Turkish coast, from where at least two dinghies arrived on the Greek island of Lesbos Friday.

The developments have alarmed Greece, which is already struggling to cope with tens of thousands of migrants and refugees stuck on its islands, with often several hundred new arrivals daily. Tension has been increasing on the islands, where locals have reacted with often-violent demonstrations to government plans to build new migrant detention facilities.

Greek Prime Minister Kyriakos Mitsotakis spoke by phone with German Chancellor Angela Merkel about the situation and the increased flows of people towards Greece’s borders, which are also the EU’s external borders.

Neighboring Bulgaria was also increasing security on its border with Turkey to counter a possible migrant influx.

Prime Minister Boyko Borissov said army units, border police and the national guard had been urgently deployed to the border. “There is a real threat” of a new migrant wave from Turkey, he said. “We have data about a lot of crowding.”

At the height of the migration crisis in 2015, thousands of people were reaching Greek islands each day from the Turkish coast and then heading through the Balkans toward more prosperous EU countries. Scores died when their unseaworthy boats sank or capsized during the short but perilous crossing. More than a million people crossed through Greece and the Balkans.