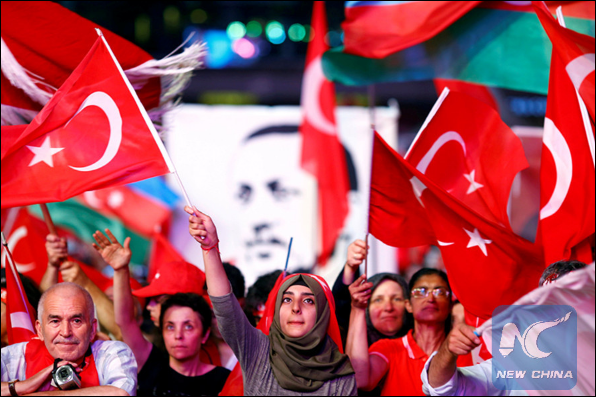 Turkey will never tolerate threats from anybody, Turkish Foreign Minister said on Thursday in response to warnings of sanctions from the United States leadership.

US Vice President Mike Pence said on Thursday that the US will slap "significant economic sanctions" on Turkey unless it immediately releases detained US pastor Andrew Brunson.

"No one dictates Turkey. We will never tolerate threats from anybody. Rule of law is for everyone, no exception," Foreign Minister Mevlut Cavusoglu said in a Twitter message.

"Threatening language is unacceptable," Turkish presidential spokesperson Ibrahim Kalin said in the wake of the minister, calling on the United States "to adopt a constructive position."

Their statements came after a harsh statement by US President Donald Trump on Thursday. Trump described Brunson in his tweet as "a great Christian, family man and wonderful human being."

In a written statement, Turkish Foreign Ministry Spokesperson Hami Aksoy responded to messages by Trump and Pence, saying that Turkey is a "sovereign state with a deep-rooted democratic tradition and political order which upholds the supremacy of law."

"No one can give orders to Turkey and threaten our country. The rhetoric of threat against Turkey is unacceptable," the statement said.

It has been clearly expressed that this issue is totally within the competence of the independent Turkish judiciary, said the statement.

Cavusoglu also had a phone conversation with his US counterpart Mike Pompeo on Thursday amid the war of words.

Brunson, a Christian pastor, was indicted on charges of having links with the outlawed Kurdistan Workers' Party (PKK) and the Fethullahist Terrorist Organization (FETO), which Turkey accuses of being behind a coup attempt in 2016.

A Turkish court ruled for continuation of Brunson's detention on July 18, but the same court ruled on Wednesday to move Brunson from prison to house arrest citing the "health excuse" that was stressed in the plea.

The Brunson case has been a sensitive issue between Washington and Ankara, causing serious congressional interventions against Turkey.

US senators introduced bipartisan legislation on July 19 to restrict loans from international financial institutions to Turkey "until the Turkish government ends the unjust detention of US citizens."

US Congress earlier introduced another bill to prevent the transfer of F-35 fighter jets to Turkey, which they claimed to jeopardize the security of NATO allies by purchasing Russian S-400 missile defense systems, also on the grounds of detention of Brunson.