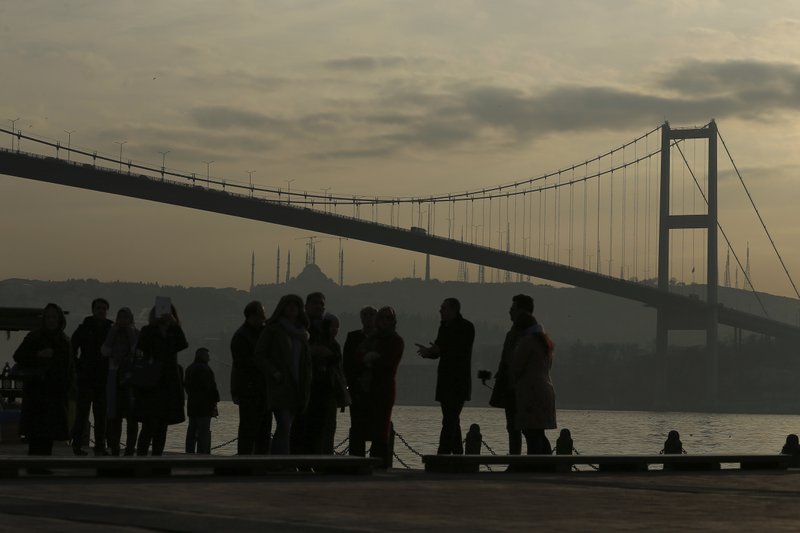 People stand by the Bosporus Strait in Istanbul, January 4, 2017. These days, with a string of terror attacks targeting Istanbul still fresh in his memory, some residents say they are adapting their daily routines because of fears they could become the latest victims of violent extremism. (Photo: AP)

In a written statement, the Istanbul governor's office asked Syrian refugees who were registered somewhere else in Turkey to leave the city and return to their places of registration by Aug. 20.

The statement said those who do not obey the order would be transferred by force in line with the directives of the Turkish Ministry of Interior.

Over 547,000 registered Syrians are living in Istanbul, while Turkey is hosting some 3.6 million Syrian refugees on its soil, a huge burden for a country beset by a flagging economy.

The governor's office stated that Istanbul is now closed to further registrations, noting all illegal immigrants without registration or temporary protection status are being caught and deported in the country's efforts to counter irregular migration.

"We can understand from the statement that Turkish officials have stepped up their measures to cope with rising population in Istanbul in a more determined way," Metin Corabatir, head of the Ankara-based Asylum and Migration Research Center, told Xinhua.

The governor's office also asked refugees to carry road permits with them, as controls shall be carried out continuously at the city's bus and railway stations, airports and all other transportation services.

In 2016, Turkey barred Syrian refugees who had been in the country under temporary protection status from leaving their designated places without permit.

"Despite the regulation, refugees have been flocking to Turkey's biggest cities like Istanbul, where there are more significant job opportunities than any other locations in the country," said Corabatir.

He said there is also political reason behind the latest measures, as hate speeches against Syrian refugees have been on the rise in the country.

"But we shouldn't forget that these people are not criminals and they came to Istanbul to make a living here and send some money back to their relatives," he remarked, saying deportations should be carried out in a humanitarian way.