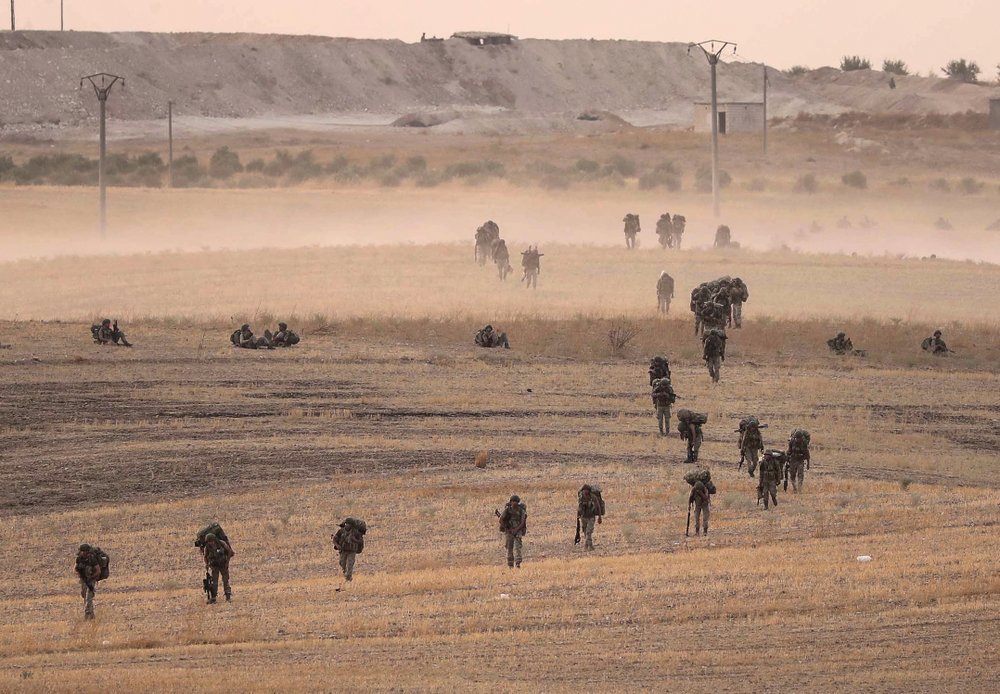 ANKARA, Oct. 15 (Xinhua) -- Turkish President Recep Tayyip Erdogan on late Tuesday rejected the offer of his US counterpart Donald Trump for a cease-fire with the Syrian Kurdish fighters, but agreed to keep in dialogue with Washington.

Speaking to journalists on his way from Baku to Ankara, Erdogan said in a phone conversation with Trump, Trump proposed to mediate for a cease-fire between Turkey and the Kurdish People's Protection Units (YPG) in Syria and decided to send a delegation to Ankara for this bid.

The delegation, led by US Vice President Mike Pence, will arrive in Turkey on Wednesday, Erdogan said, adding that he will not accept a cease-fire with the YPG first.

"I told President Trump that we would not declare a cease-fire first before discussing other issues ... we will make a deal first, then we will talk about the truce," Turkish broadcaster NTV quoted Erdogan as saying.

Turkish armed forces are making an effort to clear northern Syria of "terror organizations" and Turkey cannot declare a cease-fire before the YPG, which Ankara sees as the Syrian branch of outlawed Kurdistan Workers' Party (PKK), was eliminated from its borders, said Erdogan.

With regard to the US sanctions announced on Monday, the Turkish president noted that the United States is exerting pressure on Ankara as the YPG is rapidly losing its position after Turkey launched Operation Peace Spring in northern Syria.

"We have no worries about any sanctions," he stressed.

Concerning the Russian declaration that the Syrian government forces have fully controlled the Syrian town of Manbij that the Turkish army is advancing towards, Erdogan said "it is not a problem."

"In the end, it is their (Syrian) land," said Erdogan, stressing that however, it is important for Turkey to eliminate the presence of the YPG in the town.

On Oct. 9, Turkey started the military campaign in northern Syria in an attempt to clear the YPG from the area. The Turkish operation also aims to create a safe zone in northern Syria to resettle millions of Syrian refugees hosted by Turkey.

The campaign came after the withdrawal of the US forces from northern Syria, which was seen as a sign of abandoning the Kurdish forces that are considered as Washington's allies in fighting the Islamic State militants in Syria.

A deal, however, has recently been reached between the Kurdish forces and Damascus, which led to the Syrian army's entry to Kurdish-held areas, including Manbij town, to protect them against the Turkish assault.

Meanwhile, the US on Monday rolled out a package of sanctions on Turkey over its ongoing military operation in Syria.