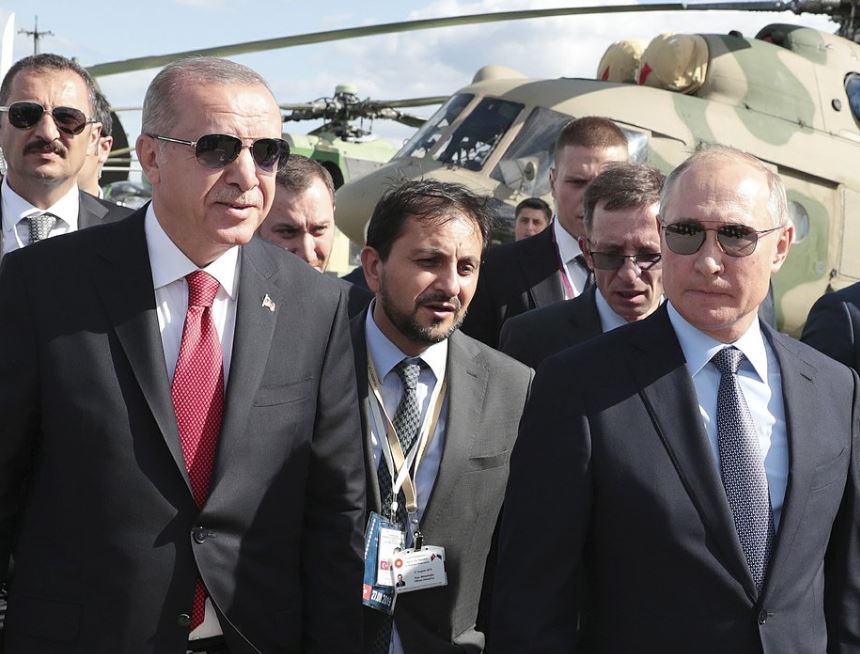 In a show of burgeoning security ties between Russia and Turkey, Turkish President Recep Tayyip Erdogan attended the opening of an annual Russian air show as a guest of President Vladimir Putin on Tuesday and expressed interest in purchasing the latest Russian fighter jets.

Erdogan has refused to budge despite the Trump administration kicking Turkey out of the multinational program to produce the high-tech F-35 fighter. Turkish officials have dangled the idea of buying Russian Su-35 fighter jets instead.

While visiting the MAKS air show outside Moscow together, the Turkish leader and Putin called each other “dear friend” and watched Russia’s latest jets perform.

Erdogan peeked inside the cockpit of the country’s top-of-the-line fighter, the Su-57, and asked if the plane was available for sale to foreign customers.

“Yes, you can buy it,” Putin responded with a smile.

The Russian president noted that another batch of equipment under the S-400 contract with Turkey, estimated to be worth more than $2 billion, was delivered Tuesday. He said Russia was ready to supply its latest fighter jets to Turkey as well and open to joint production of some weapons systems.

“We are ready for that and will actively discuss it with our partners,” Putin said.

Erdogan said that the Turkish military was being trained to use the surface-to-air S-400 missile systems.

“We want our solidarity to continue in several areas of the defense industry,” he added. “This can be passenger or war planes. What is important is the spirit of cooperation.”

While both leaders supported close economic cooperation between their countries, their discussion about joint efforts to end Syria’s civil war revealed differences in their approaches to the situation in Syria’s northwestern Idlib province.

Russia and Iran have staunchly supported Syrian President Bashar Assad’s government throughout the eight-year war, helping his army to recapture most of the country’s territory, while Turkey has backed the opposition.

Moscow and Ankara nevertheless struck a deal in September to de-escalate tensions in Idlib, the last remaining rebel stronghold. Tensions have heightened amid a recent offensive by Russia-backed Syrian troops to capture the rebel-held areas in Idlib.

Turkey protested the offensive, which has included seizing the town of Khan Sheikhoun and pushing further north. Erdogan on Tuesday described it as a violation of the de-escalation deal Russia and Turkey reached in Sochi. He said that more than 500 civilians have been killed and over 1,200 others have been wounded.

“It is unacceptable for the regime to rain death on civilians from the air and from the ground under the pretext of fighting terrorism,” Erdogan said. “We can bring about our responsibilities concerning the Sochi agreement only if the regime halts its attacks.”

Putin insisted the offensive was necessary to uproot militants who used the area as a base to launch attacks on Syrian government troops and Russia’s military base.

“The de-escalation zone can’t serve as a refuge for militants and a platform for launching new attacks,” he said.

But despite their differences, both presidents emphasized their shared interest in stabilizing northern Syria and pledged to respect mutual security interests.

“We understand Turkey’s concern about the security of its southern border and view it as Turkey’s legitimate interest,” Putin said.

Erdogan said after the talks that he and Putin have “reached an understanding what and how we can do to solve those issues in Syria.”