ISTANBUL－For Turkey's "Microangelo", any tiny, discarded item might be the canvas for his next mini-masterpiece, from a matchstick to a pumpkin seed. 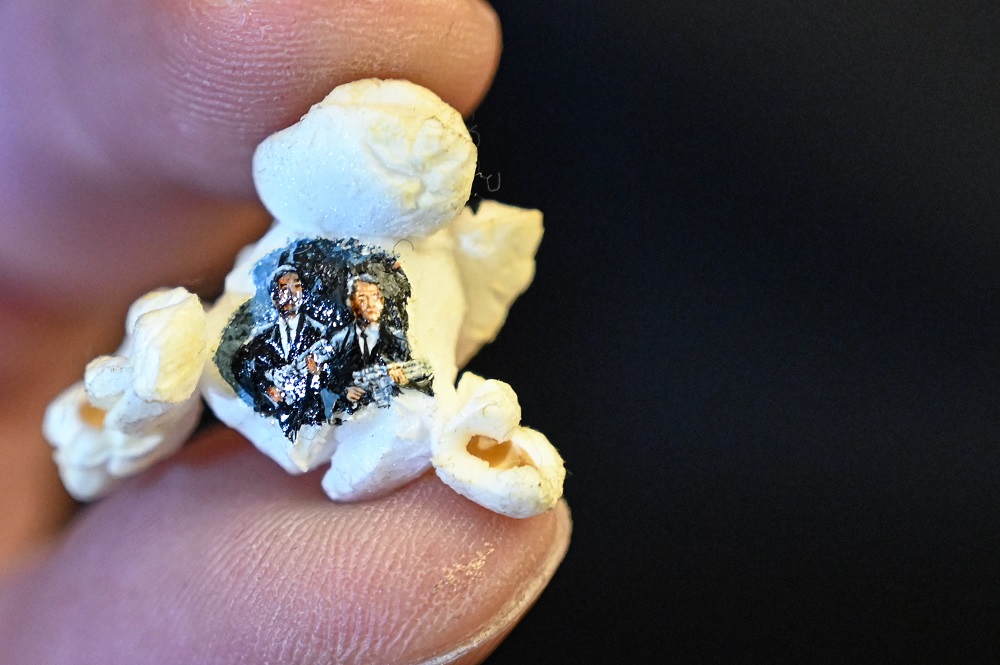 A painting on a piece of popcorn by Turkey's micro artist Hasan Kale in Istanbul. (Photo: AFP)

The delicate, impeccably detailed miniature paintings of Hasan Kale often require a magnifying glass for viewers to see the nuances but can take months to complete.

Some of the artist's best-known pieces are a scene from the movie Pulp Fiction on the side of a piece of popcorn and the silhouette of Turkey's founder Mustafa Kemal Ataturk on a grain of rice.

"I started this journey 25 years ago with the goal of establishing a new language in art ... by transforming the objects that we put aside or see as trash into little capsules of art," he said, at his Istanbul studio.

"It is a blend of experience and hand discipline. I can work on a single object for up to six months."

The 60-year-old artist, who has never had a formal art teacher, began researching miniature art in the 1980s.

He was stunned, he said, by how tiny details and touches can change a form of artistic expression.

But it was not until 1995 that he had the idea of doing it himself on unconventional objects.

He had been looking at an empty cup of coffee and noticed how the remains at the bottom formed what he thought were beautiful patterns in the small space.

"I started working on a bean. I sat down and engraved a picture of Istanbul on it.

"I enjoyed it so much that I started trying other objects," he said.

Kale has since used nearly 300 items and revels in the idea that any forgettable item－from a pebble from the sea, to a fish bone that gets stuck in your teeth－could become a work of art.

"Imagine the noise of hundreds of seeds as you bite into a fig. Can you dream an Istanbul view on one of them?" he said enthusiastically.

Kale, who works just with the naked eye and "the glasses given by his doctor," says that his greatest muse is Turkey's historic hub, Istanbul, which he has depicted on sugar cubes, dice and sunflower seeds.

"Istanbul is a brand on its own. It is a rare city which never sleeps, which straddles two continents and harbors the traces of many cultures," he said.

He learned his trade by studying Ottoman artists from the past, like Nakkas Osman, nicknamed "Osman the Miniaturist", who was featured in Orhan Pamuk's famous novel My Name is Red.

As it was for Osman in the 16th century, it remains painstaking work and Kale often paints for 16 to 18 hours a day and goes without sleep.

"First of all, you must be enormously patient. Second, you must love the work, and third, you should have no economic expectations," Kale said.

That said, his work has attracted worldwide interest and his pieces have sold for thousands of dollars.

Kale, who also designs jewelry, said he especially liked the way people recalled his work during mundane moments of their day.