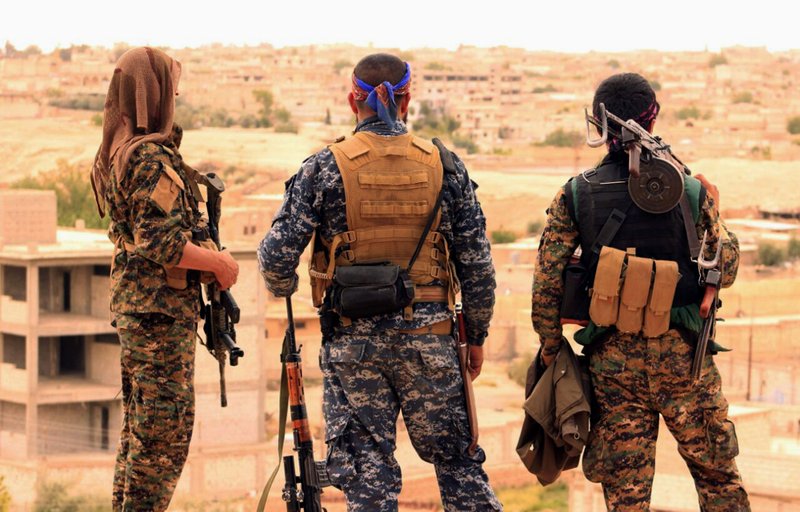 This April 30, 2017, file photo provided by the Syrian Democratic Forces (SDF) shows fighters from the SDF looking toward the northern town of Tabqa, Syria. (Photo: AP)

ANKARA, Nov. 9 (Xinhua) -- Turkey said that it would start sending captured foreign Islamic State (IS) fighters to their countries next week amid a row with European nations.

Over the last week, Turkish interior minister Suleyman Soylu has several times harshly criticized European countries for inaction, vowing to repatriate IS militants, even if their citizenship has been revoked.

On Friday, he was even more direct and told semi-official Anadolu news agency that the repatriation process will start as soon as Monday.

"Now we are telling you that we are going to send them back to you. We are starting this on Monday," said the minister, without indicating to which countries the unknown number of IS fighters would be send.

Earlier this week, Soylu warned European states and urged them to take immediate action, saying "Turkey is not a hotel for foreign terrorists."

Following its military incursion in northeastern Syria in October, the interior minister has stated that Ankara had around 1,200 foreign IS fighters and members of their families in its custody, 287 of whom had been captured during its cross-border operation.

The Ministry of Justice is working on legal ways to repatriate those militants to their countries of origin and "will soon take the necessary steps," pro-government Turkish daily Yeni Safak said.

The intransigent position of Ankara, frustrated with European inaction, is also linked to the deterioration of relations between Turkey and its Western allies after the lack of support in the offensive against Kurdish fighters in northern Syria, considered as "terrorists" by Turkish authorities.

Several European Union members have stripped their citizens detained in Iraq and Syria of their nationality, preventing them to return home, fearing that they would radicalize people there. They, instead, are insisting that these fighters and family members be convicted in their country of detention.

Britain has stripped more that 100 people of their citizenship for allegedly joining jihadist groups abroad.

Turkish specialists argue that European nations are not bearing their responsibilities in this matter, leaving Turkey, which has over the last years faced deadly IS terror attacks in big cities, to clean up their mess.

"The logical thing to do is evidently to send these people to their countries of origin. But, until now the international community has been unable to find common ground for a solution to the issue," Erol Basaran Bural, analyst at Ankara think thank 21st Century Institute, told Xinhua.

This ex-Turkish army officer argued that Europe was "exploiting legal grey areas" surrounding the problem and throwing the controversial issue into Turkey's lap.

"European nations are seemingly closing their eyes to the issue and Turkey is pressuring them to open them and confront the matter as repatriation of foreign fighters," he added.

A Turkish source close to the government told Xinhua under the condition of anonymity that international law permits that Turkey deports IS fighters caught in Turkey to their countries of origin.

"However there is a legal imbroglio concerning militants captured in Syria, where the central government has no say," a point that Western countries have until now used in their favor, he added.

It is expected that the Turkish leader will discuss the issue of foreign IS fighters with U.S. President Donald Trump at a planned meeting in the White House on Nov. 13.