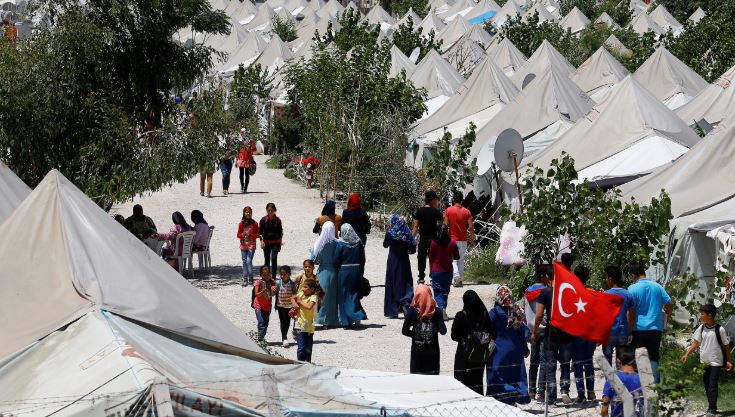 Syrian refugees walk in a refugee camp in Osmaniye, Turkey, in May 2016. (File photo: AFP)

ANKARA, Dec. 21 (Xinhua) -- Turkish President Recep Tayyip Erdogan is seeking international financial support for the resettlement of one million Syrian refugees in the region where his country carried out a military incursion, a controversial project which has little international response.

Recently, the Turkish leader told state broadcaster TRT that Ankara would finance the resettlement in a planned "safe zone" on its own if its allies do not provide support.

Turkey launched a third military offensive in October since three years in northern Syria against the Kurdish People's Protection Units (YPG), seizing a 120 km strip of land along its southern borders.

Since undertaking the military operation, Ankara has urged Western and NATO allies to back its plans to build new towns in northeastern Syria, where it once claimed would accommodate "up to two million" Syrians.

However, Western officials, in particular from European nations, who denounced Turkey's military interference in the war-torn neighbor, said they would not fund any project which involved involuntary returns or modified Syria's demographic fabric, something Ankara denies.

"The Turkish nation can carry out an exemplary step between the Syrian towns of Ras al Ain and Tel Abyad," Erdogan said in his TRT interview. "Settling one million people, that is our aim in the safe zone, that is our plan," he pointed out.

Turkey is currently the country hosting the largest community of 3.7 million refugees from neighboring Syria. Turkish officials have not indicated the timeline of the resettlement of refugees, but there is a growing anti-refugee sentiment among the Turkish population and Erdogan wants his plans to begin as soon as possible.

An European diplomatic source told Xinhua on condition of anonymity that the EU is currently supporting Turkey's hosting of a huge refugee population, under a 2016 deal which envisages 3.6 billion euros ($4 billion).

"Nevertheless, at the moment, there is no unanimity in the EU to fund such a gigantic project, which experts believe, could amount to up to $25 billion," he said, expressing also concerns over the frequent threats from Erdogan to send refugees to European nations as retaliation for "a lack of action from the EU."

"We don't see it realistic to send people in a potential conflict zone without providing them means to carry out their lives, to survive, let alone the other fact that they would be ready to go there on a voluntary basis," he added.

Under intense domestic pressure to solve Turkey's refugee crisis, Erdogan raised the issue in early December to his German, French and British counterparts on the sidelines of a NATO summit in London, but failed to receive their support.

The only country which seemed to show some interest to Turkey's plans is its regional ally Qatar, indicated Erdogan.

"We have received no support from our Western allies and this is very sad... We have until now spent more than 40 billion dollars for the refugees," Erdogan told reporters following the Global Refugee Forum that he attended last week in Switzerland's Geneva.

He also said that 371,000 Syrians have already chosen to leave Turkey to return to their home country, however, the number has been disputed by right groups and experts.

"There seems to be a lack of transparency concerning these numbers and how they are collected," Didem Isci, a researcher from the Ankara-based think-thank Bosphorus Migration Studies, told Xinhua.

She noted that all surveys point to the fact that a majority of Syrian refugees were not willing to return to Syria, where it would be difficult for them to have a sustainable life with no active economy in the areas.

"Unfortunately, Turkey has been left alone to shoulder the burden of the refugees and now it is left alone in its safe zone plans," she added.

Erdogan is trying to explain to the international community that his country has done more than its fair share in this crisis and that Western nations have to pitch in as soon as possible.

"In the last eight years, 516,000 Syrian babies were born in Turkey and we have offered them every healthcare possible," he said, denouncing the lack of international support.

Syrian and Russian forces carry out frequent air raids against rebels in Idlib, pushing more people towards the Turkish border amid Turkish and international fears of another huge refugee influx. Turkey has said that it would not accept any more refugees.