Several Turkish armored vehicles and tanks entered rebel-controlled northwestern Syria early on Friday, the latest reinforcements sent in by Ankara amid a Syrian government offensive that this week brought the two countries’ troops into a rare direct confrontation. 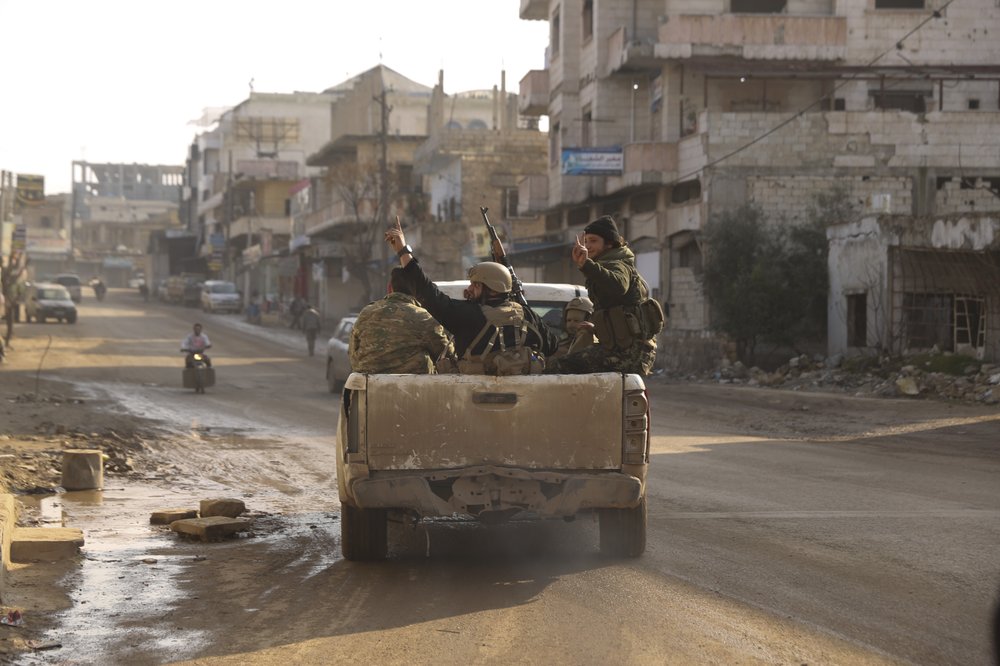 Syrian rebel drive toward the government positions near the village of Nerab, in Idlib province, Thursday, Feb. 6, 2020. (Photo: AP)

The Syrian government, backed by its ally Russia, has kept up a military offensive in Idlib province, aimed at securing a strategic highway that runs along rebel-controlled territory. President Bashar Assad’s forces have seized dozens of rebel-held towns and villages in the past two months, displacing hundreds of people in the process.

Turkey, which backs the Syrian opposition and has been monitoring a cease-fire in the rebel enclave, protested the government offensive, calling it a violation of the truce it negotiated with Russia. In recent weeks, Ankara sent in troops and equipment to reinforce monitoring points it set up to observe a previous cease-fire, which has since crumbled, but also deployed around towns threatened by the Syrian military advances.

The deployment and the new defensive role brought Turkish troops into a direct and rare confrontation with Syria troops that killed at least eight Turkish military and civilian personnel and 13 Syrian soldiers on Monday.

An Associated Press video shows a long line of armored vehicles and trucks, carrying tanks, filing into rebel-controlled rural areas of Idlib province on Friday. The Britain-based Syrian Observatory for Human Rights, which monitors the war, said the new troops deployed west of the town of Saraqeb. It was fifth known deployment of new troops into Syria over the last week, according to the Observatory and other opposition news outlets.

Syrian government troops took control of the former rebel town of Saraqeb this week. The town is strategic because it sits on the intersection of two major highways, one linking the capital, Damascus, to the north, and another connecting the country’s west and east.

The Turkish military posts erected around Saraqeb didn’t stop the military advance, which left some of those Turkish posts are now behind Syrian lines.

For weeks, Syrian troops, backed by Russian air force, have been advancing in rebel territory as the cease-fire deal reached in 2018 unraveled. The offensive has displaced over half a million people, many of them arriving in open air and temporary shelters, often near the borders with Turkey. Idlib and nearby rural Aleppo are the last rebel-held areas in Syria and are home to more than 3 million people, most of them already displaced by previous rounds of violence.

Turkish officials say three Turkish observations posts are currently inside Syrian government-controlled areas in Idlib. A security official, speaking on condition of anonymity in line with government rules, insisted the posts would not be evacuated.

Turkey’s Defense Ministry warned the army would respond “even more forcefully” to any attack on the observation posts. “Our observation posts will continue carrying out duties,” the ministry said.

There was a brief reprieve from the fighting Friday, apparently caused in part by bad weather, including a rainstorm.

On Thursday, Russia announced that a number of its soldiers had been killed in a northern Syrian province alongside Turkish servicemen, without saying when the incident occurred or how many were killed. The Russian foreign ministry blamed “terrorists” for the deaths.

The violence has also raised tension between Moscow and Ankara, which have been working together to secure cease-fires and political talks despite backing opposite sides of the conflict.

Turkish Foreign Minister Mevlut Cavusoglu said a Russian delegation is scheduled to arrive in Ankara on Saturday to discuss the situation in Idlib. A meeting between Turkish President Recep Tayyip Erdogan and Russian President Vladimir Putin could follow “if necessary,” Cavusoglu told reporters.

“We will do whatever is necessary to stop the human drama, the disaster (in Idlib),” Cavusoglu said.