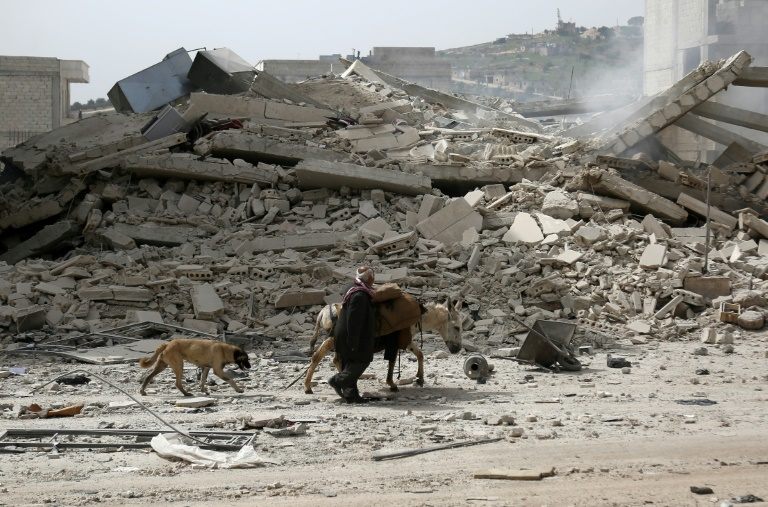 Turkey on Friday rejected a French offer to mediate with the Syrian Democratic Forces which is dominated by a Kurdish militia blacklisted by Ankara, condemning Paris' "wrong stance".

French President Emmanuel Macron offered late on Thursday to facilitate dialogue between the two sides after he met a delegation of Kurdish and Arab fighters.

Macron said he hoped this could be set up with help from Paris and the international community.

Turkey dismissed it out of hand in a move likely to further fuel tension with France, which has expressed clear concerns over an ongoing Turkish military operation in northern Syria.

Macron's comments were not well received by Turkish President Recep Tayyip Erdogan, who said he was "extremely saddened by France's... wrong stance".

"We have no need for mediation... Since when has Turkey had an issue of sitting down at the table with terror organisation?" Erdogan thundered during a speech in Ankara.

Presidential spokesman Ibrahim Kalin said on Twitter that Turkey rejected "any efforts to promote 'dialogue', 'contact' or 'mediation' between Ankara and those terrorist organisations".

"It is not possible to say a country which welcomes the YPG at the Elysee is unbiased. You are already on the side of terrorists," Turkish Foreign Minister Mevlut Cavusoglu said.

The backbone of the SDF is the Kurdish People's Protection Units (YPG), a militia group which has been driven out of its Afrin stronghold by the Turkish offensive.

The YPG is the military wing of the main Syrian Kurdish political movement, the Democratic Union Party (PYD).

The Turkish military launched its offensive against the YPG in January, targeting the group over its ties with the outlawed Kurdistan Workers' Party (PKK) which has waged an insurgency inside Turkey since 1984 and which Ankara blacklists as a terror group.

"Turkey's position on PKK/PYD/YPG, which seeks to legitimise itself as SDF, is perfectly clear," Kalin said, warning Paris against taking any steps which could be construed as legitimising terror groups.

"The countries we consider friends and allies must take a clear stand against all forms of terrorism," he said.

"The various names and disguises cannot hide the true identity of the terrorist organisation."

Both France and the United States have worked closely with YPG fighters in the battle against Islamic State jihadists in Syria.

During Thursday's talks, Macron acknowledged the "role of the SDF in the fight against Daesh", the Elysee said using an Arabic acronym for IS.

Macron and Erdogan have spoken several times on the phone since Turkey's operation began on January 20.

But the Turkish president said that Macron had made "strange remarks" in a call about Syria last week. "I was forced to point it out to him, even if the tone was a bit raised," he said, without giving details.

Deputy Prime Minister Bekir Bozdag took a much tougher line, lashing out at France and warning that any country cooperating with "terrorists" would be on Turkey's radar.

YPJ is the women's force within the YPG.

Kurdish official Asya Abdullah told reporters after the meeting with Macron that France was planning on sending "new French troops to Manbij" -- an area east of Afrin where Turkey has threatened to expand its campaign.

"The cooperation will be reinforced," she said.

But Macron's office on Friday said it was not planning any new military operation on the ground in northern Syria outside the international coalition against IS.

Before the statement, Bozdag warned that those working with terror groups would become Turkey's target and hoped France would not take such an "irrational step".

"Those who cooperate with terror groups against Turkey ... and attack Turkey alongside terrorists will get the same treatment that we inflict upon those terrorists," said Bozdag, who is also the government spokesman.

About 10 days into the Turkish operation in Syria, Macron had incensed Turkish officials by saying France would have a "real problem" if the campaign turned out to be an "invasion operation".

The comments drew a sharp response from Turkish authorities, saying that Turkey has never been "colonialist" in its history, urging Paris to look at its own past.

On March 18, Turkish forces and their rebel allies took full control of Afrin, with the YPG largely withdrawing without a fight.