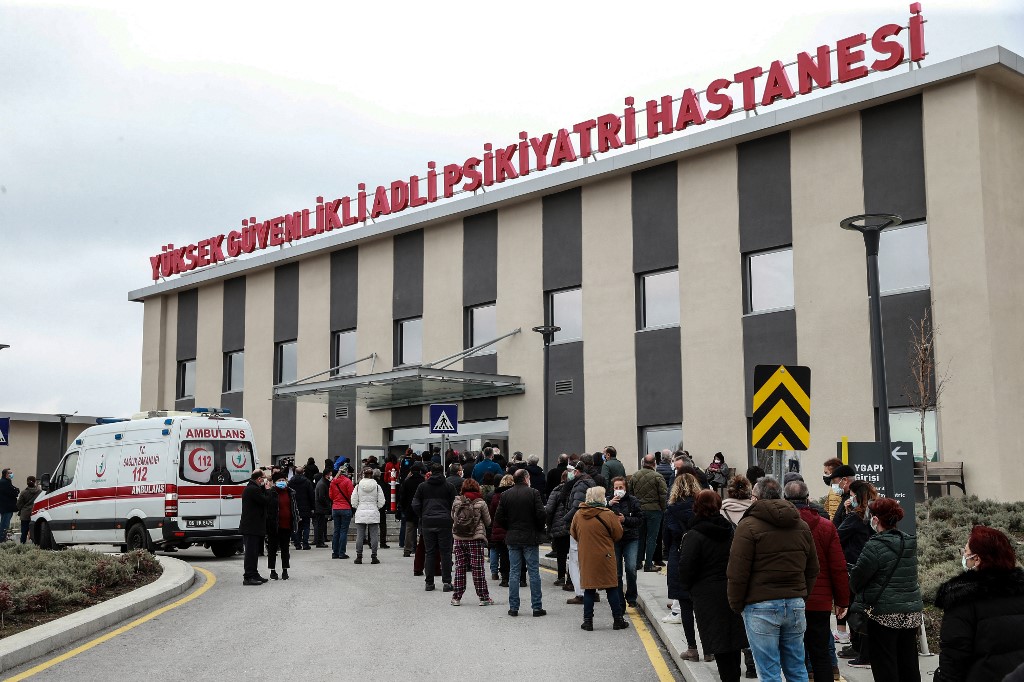 People queue outside the City Hospital to get the first dose of the Pfizer-BioNTech vaccine to protect against COVID-19, in Ankara on April 2, 2021. (Photo: AFP)

According to a statement by Health Minister Fahrettin Koca on his Twitter account, the surge in daily cases was mainly due to an increase in infections of the COVID-19 variant.

The Health Ministry said on Friday that it had officially recorded 42,308 new COVID-19 cases in 24 hours, the highest number of daily cases since the outbreak of the COVID-19 in the country more than a year ago.

Turkey's overall caseload has exceeded 3.3 million, while the death toll from the virus has reached 31,892. The number of COVID-19 patients in critical conditions currently stands at 2,182.

After the number of daily cases fell below 10,000 in March, Turkey started to ease restrictions which were adopted following a second wave of contagion last November, reopening businesses such as restaurants, cafes and tea houses amid a gradual return to in-person education.

But that normalization process is now on hold.

Since Turkey began a mass COVID-19 inoculation campaign on Jan. 14, it has administered over 16.1 million jabs, according to official figures.

In a country of 83 million people, more than 9.2 million to date have received their first doses, while the second doses have been given to over 6.9 million.

In the light of the rise in cases and fatalities, Turkey announced the return of weekend curfews in high-risk areas and other restrictions, in addition to special measures for the upcoming Muslim holy month of Ramadan, which will start on April 13 in Turkey.

Communal meals during the Ramadan will be prohibited, as was the case last year.

"Unfortunately, COVID-19 rules have not been fully respected, and we have returned to restrictions. This situation is again a new burden for health professionals," Gule Cinar, a virologist from a hospital in the capital Anraka, told Xinhua.

"The variant is said to be 60-percent more deadly. We must obey safety rules," Bengi Baser, a professor of cardiology, said on his Twitter account.

The resurgence of infections is also a bad omen for Turkey's vital tourism industry which is pinning high hopes for this year after a particularly difficult 2020.

"Currently, we have the highest daily (infection) numbers in Europe, so we have to give confidence to our future visitors by accelerating our vaccination program," Esral Dongec, manager of an Ankara-based travel agency, told Xinhua.

"Vaccines will play a central role in global travel and Turkey is on a good path," Dongec said, calling on all people to abide by safety measures.