Turkey will search the Saudi consulate in Istanbul later on Monday as part of an investigation into the disappearance of prominent journalist Jamal Khashoggi, a Turkish diplomatic source said. 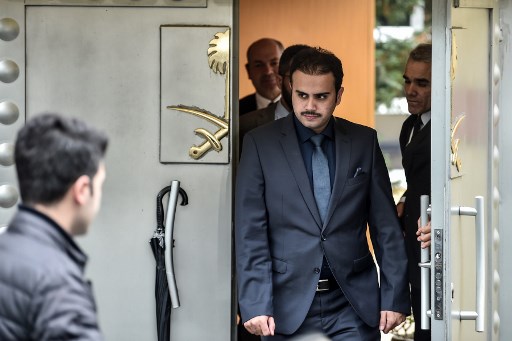 "It is expected that a search will take place towards the evening," said the source, who asked not to be identified.

Khashoggi, a Washington Post contributor and Saudi citizen residing in the United States, vanished on October 2 after visiting the building to obtain official documents.

The source said it would be a joint search with the Saudi authorities.

The development comes after a Saudi delegation of a dozen officials arrived in Turkey while Saudi King Salman and Turkish President Recep Tayyip Erdogan at the weekend discussed the case in their first telephone talks on the controversy.

The two countries are sharply at odds over what happened to Khashoggi, who has been critical of some policies of Saudi Crown Prince Mohammed bin Salman and Riyadh's intervention in the war in Yemen.

While Riyadh insists Khashoggi left the consulate after his visit, Turkish police said he did not leave the building.

Last week the regional rivals agreed to set up a joint working group to solve the mystery over the disappearance.

But Ankara and Riyadh disagreed over the search after Saudi officials reportedly said they would only allow a superficial "visual" search.

However, the Turkish side rejected this offer and pro-government daily Sabah reported last week that officials wanted to search the building with luminol, a chemical that allows the discovery of blood traces.