WORLD Turkey to US: end support for Syrian Kurdish YPG or risk confrontation

Turkey to US: end support for Syrian Kurdish YPG or risk confrontation 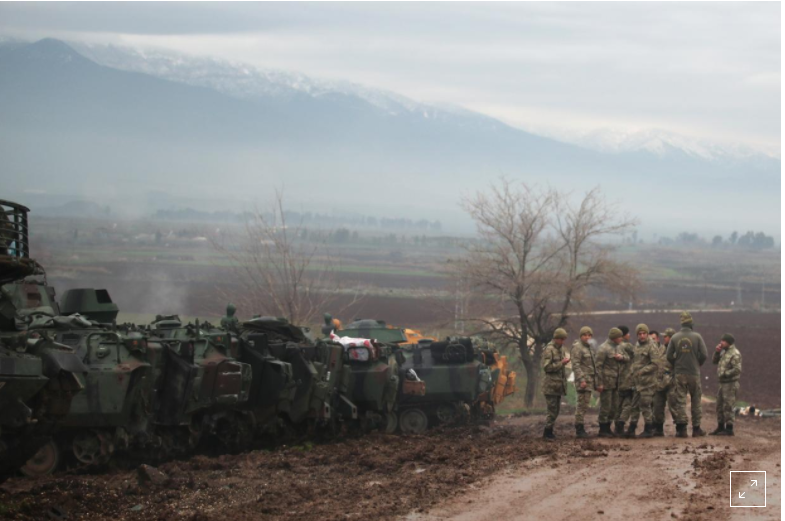 Turkish soldiers are pictured in a village near the Turkish-Syrian border in Hatay province, Turkey January 24, 2018. Photo: Reuters/Umit Bektas

Turkey urged the United States on Thursday to halt its support for Kurdish YPG fighters or risk confronting Turkish forces on the ground in Syria, some of Ankara’s strongest comments yet about a potential clash with its NATO ally.

In Washington, the Pentagon said that it carefully tracked weapons provided to the YPG and would continue discussions with Turkey.

“We carefully track those weapons that are provided to them, we ensure that they, to the maximum extent possible, don’t fall into the wrong hands and we’re continuing discussions with the Turks on this issue,” Lieutenant General Kenneth McKenzie, joint staff director, told reporters.

Turkey’s targeting of the YPG, which it views as a security threat, has opened a new front in Syria’s multi-sided civil war. The Syrian Kurdish group is a main part of a US-backed rebel alliance that has inflicted recent defeats on Islamic State militants.

Any push by Turkish forces towards Manbij, part of a Kurdish-held territory some 100 km (60 miles) east of Afrin, could threaten US efforts in northeast Syria and bring them into direct confrontation with US troops deployed there.

“Those who support the terrorist organization will become a target in this battle,” Deputy Prime Minister Bekir Bozdag said.

“The United States needs to review its solders and elements giving support to terrorists on the ground in such a way as to avoid a confrontation with Turkey,” Bozdag, who also acts as the government’s spokesman, told broadcaster A Haber.

The United States has around 2,000 troops in Syria, officially as part of an international, US-led coalition against Islamic State. Washington has angered Ankara by providing arms, training and air support to Syrian Kurdish forces that Turkey views as terrorists.

The Kurdish-led autonomous administration that runs Afrin on Thursday called on the Syrian government to defend its border with Turkey in Afrin despite Damascus’ stance against Kurdish autonomy.

“We call on the Syrian state to carry out its sovereign obligations towards Afrin and protect its borders with Turkey from attacks of the Turkish occupier,” it said in a statement on its website.

The Syrian government has said it is ready to target Turkish jets in its airspace, but has not intervened so far. It suspects the Kurds of wanting independence in the long-run and does not recognize the autonomous cantons they have set up in northern Syria.

US forces were deployed in and around Manbij to deter Turkish and US-backed rebels from attacking each other and have also carried out training missions in the area.

US President Donald Trump urged Erdogan on Wednesday to curtail the military operation in Syria, the White House said.

However Turkey has disputed that characterization of the conversation.