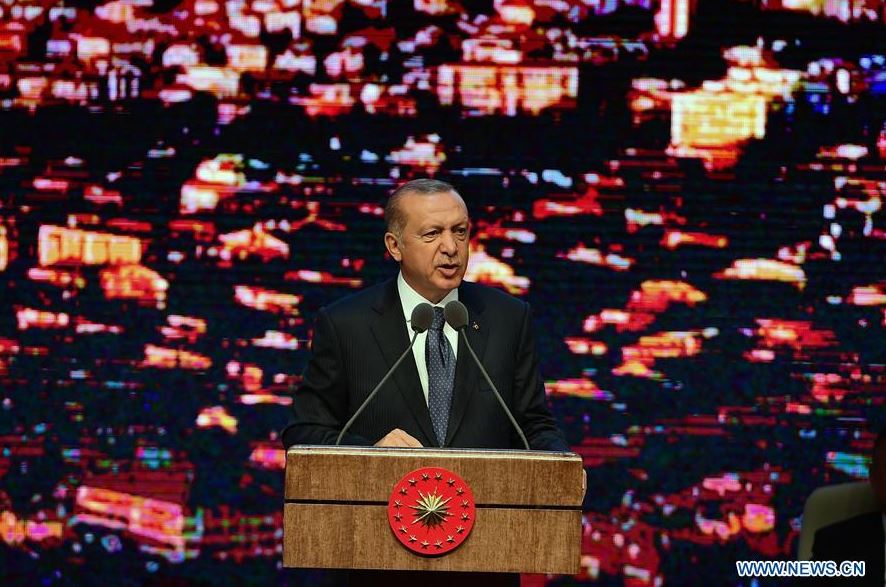 "We are faced with an economic war but don't worry, we will prevail and win this war," said Erdogan in his address to 2,000 people in the presidential palace in the capital Ankara.

He detailed his government's 100-day action plan and 400 projects in sectors of economy, energy, transport, tourism, education and foreign policies following his re-election for another five-year presidential term in the general elections on June 24.

Erdogan called on citizens to convert their savings into Turkish lira, the embattled national currency, in order to bring fresh cash to the financial system and help the vulnerable economy.

"People show the world, bring your foreign currency and gold out from under your pillows, and join the national resistance," he said.

"My people should be assured that we will surmount these problems, and do not listen to those who spread nonsense about our economy," Erdogan added, pledging to maintain fiscal discipline at all costs.

Turkey's economy is struggling to absorb a slide of more than 30 percent in lira against US dollar this year and surging interest rates, while investors are looking to the Turkish authorities to reduce the 15.85-percent inflation in July, the highest rate since 2004, through spending cuts and increase in interest rates.

The central bank unexpectedly left rates unchanged at 17.75 percent at a meeting last month, spurring further declines in the currency.

The lira took another hit after the United States imposed unprecedented sanctions on Wednesday on two Turkish ministers in an escalating political row, in which the United States demanded the release of the US pastor Andrew Brunson, who was detained by Ankara on espionage and terror-related charges.

Earlier in the day, US Secretary of State Mike Pompeo and his Turkish counterpart Mevlut Cavusoglu met on the sidelines of the ASEAN foreign ministers meeting in Singapore.

The two ministers "had a constructive conversation," agreeing to "continue to resolve the issues" between the two NATO allies, according to US State Department spokeswoman Heather Nauert.

The lira, however, crashed to an all-time low of 5.1 against the dollar on Friday, even as observers underlined the widening current account deficit of the country and the need for foreign investment to recover.

Ankara's rapidly souring relations with Washington is the latest of tremors affecting Turkish markets. Investors are worried about the government's insistence on pushing for lower interest rates and the appointment of Berat Albayrak, Erdogan's son-in-law, as the minister of finance and treasury.

Albayrak tried to ease investors on Friday, saying the government's "number one goal" was to bring down inflation and interest rates.

"We will see single-digit inflation in 2019," he told private broadcaster NTV.

The 100-day action plan included measures of supporting small and medium-sized enterprises ahead of the local elections due in March 2019.

With the policies to be implemented, inflation will be reduced again to single digit, according to Erdogan.

In addtion, the president said during his presentation that 48 out of the 400 projects are related to Turkey's defense industry.

"There will be no backing down from these projects which are essential for Turkey's national interests," he vowed.

The Turkish president also stressed the importance of the Chinese, Mexican, Russian and Indian markets in the new era ahead.

They "will become a priority for Turkish exports," Erdogan said.

Another highlight of the action plan is that Turkey plans to issue Chinese yuan-denominated bonds for the first time because of "one-sided" reports of credit rating institutions.

Other major projects include the Canal Istanbul, an artificial sea-level waterway that will connect the Black Sea to the Sea of Marmara and the Mediterranean.

"We have had some setbacks in the past years for different reasons, but we will work even harder from now on to realize these important projects," concluded Erdogan.