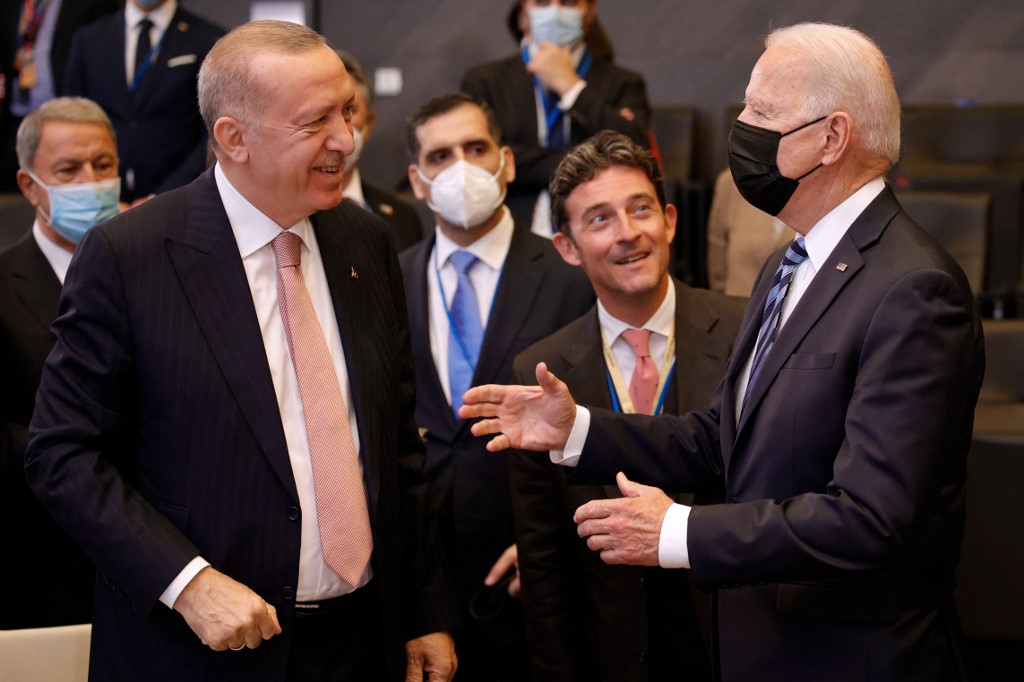 US President Joe Biden (R) speaks with Turkey's President Recep Tayyip Erdogan prior to a plenary session of a NATO summit at the North Atlantic Treaty Organization (NATO) headquarters in Brussels, on June 14, 2021. (Photo: AFP)

ANKARA, June 17 (Xinhua) -- U.S. President Joe Biden and his Turkish counterpart Recep Tayyip Erdogan's meeting in Brussels on the sidelines of a NATO summit didn't produce a major breakthrough for the strained relations between the two countries but a practical dialogue has been set in motion, experts said.

"There is no problem with the U.S. that we cannot solve," Erdogan said following the first meeting since Biden took office.

Meanwhile, Biden told reporters that the meeting was productive and the two countries "have big agendas" where he is "confident we'll make real progress."

Their agendas include last year's U.S. cancellation of Turkey's participation in the F-35 Joint Strike Fighter program and sanctions on the Turkish defense industry for its purchase of Russia's S-400 missile defense system.

Washington insists that the Russian air defense system is incompatible with NATO systems and could potentially be used by Moscow to covertly obtain classified information on the F-35 jets. Ankara, however, argues that the S-400 would not be integrated into NATO systems.

A Turkish diplomatic source told Xinhua that the Turkish government has submitted to the U.S. side a "long list of grievances, and ways and methods to overcome the current differences" in bilateral relations including the S-400 issue and U.S. support for Syrian Kurdish militants considered by Turkey as terrorists.

"This first meeting was important and meaningful. However there cannot be major breakthroughs in one single meeting," the source said on condition of anonymity.

"There is no easy solution to the S-400 row, and the United States will not stop supporting the the People's Protection Units in northern Syria," Serkan Demirtas, a foreign policy analyst, told Xinhua.

However, "an opportunity to introduce a new framework in the bilateral ties is present because it's a long-term relationship and covers a vast area of cooperation under the NATO roof," he noted.

Afghanistan, for instance, may emerge as a joint working area between Ankara and Washington as Turkey has said it could stabilize the country after the American complete pullout by Sept. 11.

Tulin Daloglu, a TV news presenter and expert in American affairs, remarked that the Turkish leader abandoned his aggressive narrative in foreign politics and toward the United States, in an attempt to seek a normalization with regional foes and Washington.

"The geostrategic realities are forcing Erdogan to move back to the traditional foreign policy settings," she told Xinhua, arguing that this new narrative "is a good thing for Turkey."

For the United States, it "wants neither to push Turkey further to the side of Russia nor to be supportive of Erdogan's regime as it used to in the past," Daloglu observed.