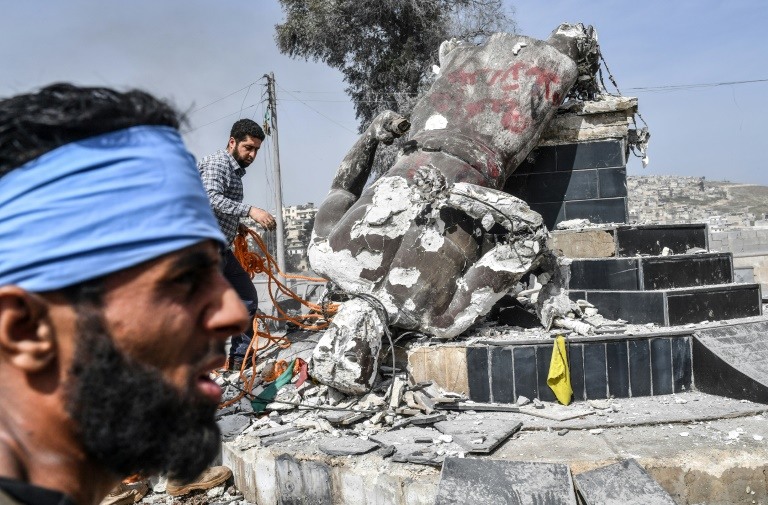 Turkish-backed Syrian rebels remove a rope from the statue of Kurdish hero Kawa after destroying it in the city of Afrin in northern Syria on March 18, 2018. (Photo: AFP)

Turkey vowed Monday to expand its operation in northern Syria to other Kurdish-held areas after its troops and allied forces seized control of the city of Afrin in a major blow to the Kurds.

A day after Turkish-led forces entered the city virtually unopposed, President Recep Tayyip Erdogan said the fight would now be taken to other Kurdish areas of northern Syria.

"We will continue this process until we entirely eliminate this corridor, including in Manbij, Ayn al-Arab, Tal Abyad, Ras al-Ayn and Qamishli," said the Turkish leader, in a characteristically bullish mood.

Syria's civil war entered its eighth year this week with heavy fighting on two fronts -- around Afrin and in the rebel enclave of Eastern Ghouta near Damascus.

In Afrin, the Kurdish People's Protection Units (YPG) could do little when Syrian Arab fighters backed by NATO's second-largest army thrust into the city on Sunday.

The fighters, mostly former rebels who fought President Bashar al-Assad, celebrated their victory by destroying the statue of Kurdish hero Kawa and looting shops and other property.

"All those who took part in this decadence need to have their hands slapped hard," said Mohamed Alloush, a key figure in the Jaish al-Islam rebel group.

An AFP reporter said looting was still taking place on Monday, with fighters joking at checkpoints about their spoils.

The mosaic of factions hired by Turkey from Idlib province and elsewhere to wage the offensive were spray-painting their groups' names on Afrin shop fronts and walls.

They also picked through debris for bombs and unexploded ordnance after explosions killed at least 13 of them on Sunday.

The command of the operation Ankara launched on January 20 appeared to be rotating some fighters out in order to bring in a police holding force.

Turkey said its operation was aimed at securing the north of the country to allow the three million Syrian refugees on its soil to return.

Ankara was also worried that the Kurds, who control some 30 percent of Syrian territory, would consolidate a statelet stretching all along the border.

Turkish-backed Syrian rebels gather in the city of Afrin in northern Syria on March 18, 2018. (Photo: AFP)

Nicholas Heras, a security fellow at the Center for a New American Security, said taking Afrin was a success for Erdogan, who shrugged off international concern to press on with the operation.

"Afrin is one of the most strategic areas of northwest Syria. It is a piece of real estate that anchors Turkey's presence for many years to come," Heras said.

Bitterness ran high among the Kurds, who feel poorly rewarded for the sacrifices made when they were the ground force of the US-led coalition's war against the Islamic State jihadist group.

The Syrian Observatory for Human Rights, a Britain-based monitor, said that more than 1,500 Kurdish fighters had been killed since the start of the offensive, most of them in air strikes and artillery fire.

The YPG has vowed to fight back to reclaim Afrin but their chances look slim and tens of thousands of residents who fled the city in recent days now find themselves in limbo.

Syria's conflict, which started seven years ago this month when Assad's forces cracked down on peaceful protests demanding regime change, has killed at least 350,000 people and displaced more than half of the pre-war population of 20 million.

As his main backer Russian President Vladimir Putin secured a fourth term, Assad projected confidence Sunday in videos released by his office that showed him driving himself to recaptured areas of Ghouta. 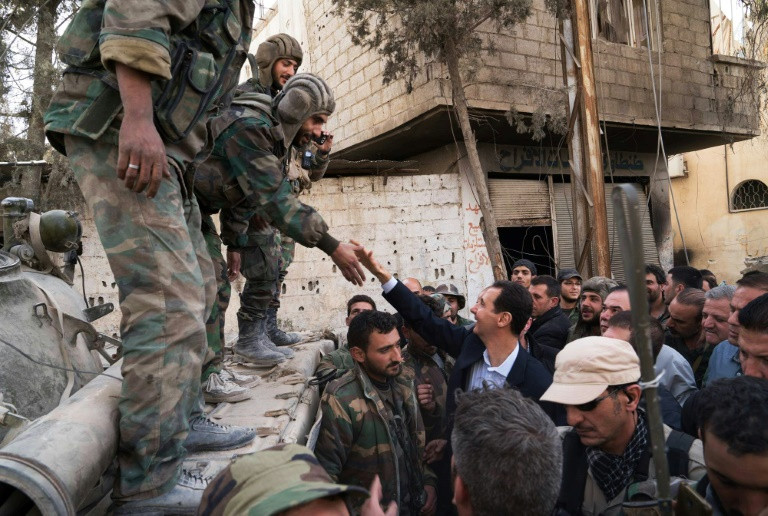 A handout picture released by the official Facebook page of the Syrian Presidency on March 18, 2018, shows Syrian President Bashar al-Assad (C) shaking hands with government troops in Eastern Ghouta during a rare visit to the former rebel enclave. (Photo: AFP)

Sporting a pair of sunglasses, he spoke to the camera from the wheel of his Honda as he drove past scenes of devastation.

The goals of the Islamist and jihadist groups in Ghouta "was to choke Damascus by cutting off roads and communications between cities", he said.

"Oxygen and blood are flowing again in the country's main arteries."

On February 18, Syria and its Russian ally launched a blistering aerial campaign against Eastern Ghouta, a semi-rural area within mortar range of central Damascus that had escaped regime control since 2012.

The regime has pursued the miliary option against two of them, causing a mass civilian exodus, but had, until Sunday, allowed the area around the main town of Douma some level of respite.

Fresh bombardment on Douma killed 20 people, according to the Observatory.

The latest casualties came as the regime allowed some medical evacuations from the area, according to an AFP correspondent.