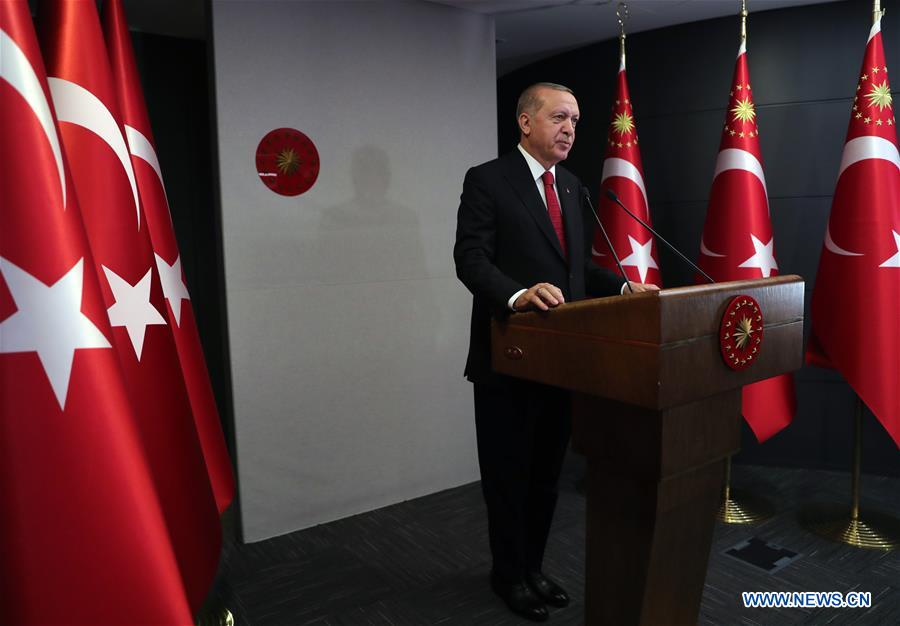 Turkish President Recep Tayyip Erdogan attends a ceremony for the installation of the last steel block of 318-meter towers of the Canakkale 1915 Bridge via videoconference in Istanbul, Turkey, on May 16, 2020. The construction of a bridge which will connect Asia and Europe in northwestern Turkey advanced to a next phase on Saturday with the completion of its towers. (Photo: Xinhua)

ANKARA, June 2 (Xinhua) -- Turkey will uncompromisingly continue to protect its rights and interests in the Mediterranean, the country's National Security Council said on Tuesday.

The council said in a statement that it held a face-to-face meeting for the first time in four months to evaluate the "negative approach of these actors towards the legitimate and legal steps" of Ankara in the Mediterranean.

The council said that the protection of Turkey's rights, interests in land, sea, and air in the Mediterranean "will continue without compromise."

"Turkey will also continue military support to the Libyan government in Tripoli," read the statement.

"The military consultancy services provided by our country will be maintained for the efforts of the legitimate government, which is recognized by the UN, to ensure peace and tranquility throughout the country (Libya)," it said.

Turkey called on the international society to take a "principled stance" against those who target the legitimate Libyan government in Tripoli, said the statement, referring to General Khalifa Haftar who fights the rival UN-backed government.

In 2019, Turkey signed a memorandum of understanding for maritime delimitation with Libya's UN-backed government of national accord, and planned to launch drilling activities in the Eastern Mediterranean upon the deal.

The agreement fueled tensions in Turkey's dispute with Greece, Cyprus and Egypt over the oil and gas drilling rights in the area.

After sealing a military cooperation deal with the government in Tripoli, Turkey also sent security officials to Libya to support the UN-backed government led by Fayez al-Sarraj.