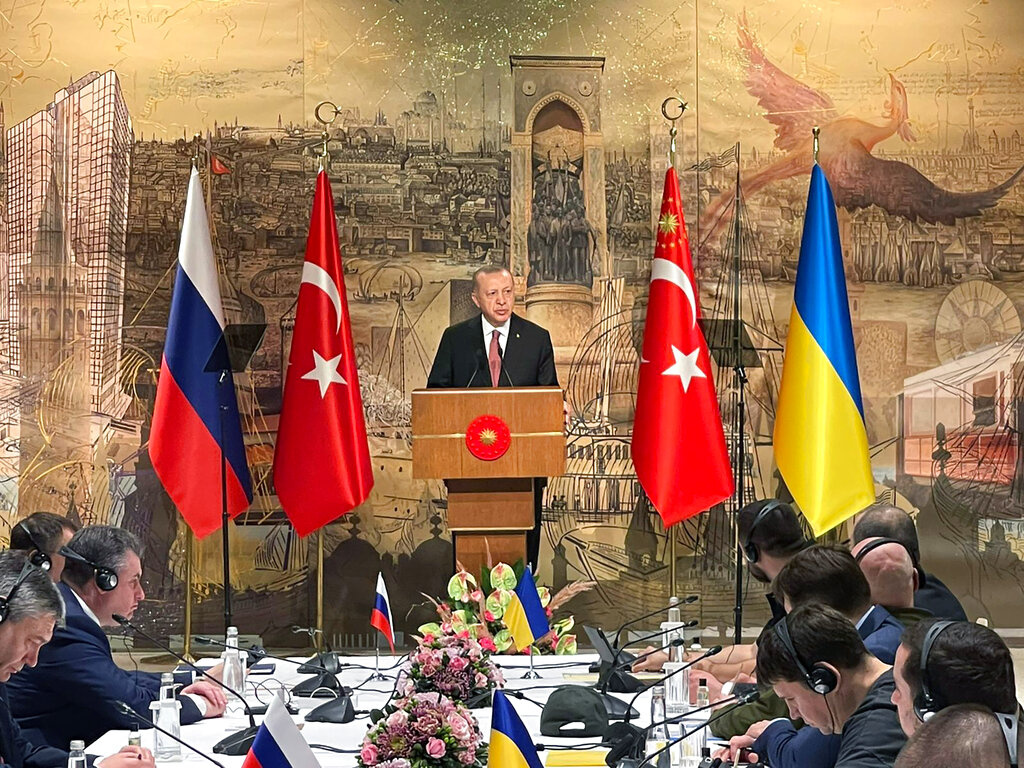 In this photo released by the Ukrainian Foreign Ministry Press Service, Turkish President Recep Tayyip Erdogan, center, gives a speech to welcome the Russian, left, and Ukrainian delegations ahead of their talks, in Istanbul, Tuesday, March 29, 2022. (Photo: AP)

ANKARA, March 31 (Xinhua) -- Ankara welcomes the proposal of being one of the guarantor countries in terms of the security of Ukraine, Turkish media reported on Thursday, quoting Turkey's president as saying.

"We can be one of the guarantor countries in terms of guaranteeing the security of Ukraine. We welcome this in principle. But of course, the details need to be clarified," Turkish President Recep Tayyip Erdogan told reporters accompanying him during an official visit to Uzbekistan.

He will have phone conversations with both Russian President Vladimir Putin and Ukrainian President Volodymyr Zelensky, urging them to meet in Turkey for a final peace agreement, semi-official Anadolu Agency quoted him as saying.

"I am determined to hold talks with both Mr. Putin and Mr. Zelensky as soon as I return (to Turkey). In these talks, I will say, 'Our goal now is to bring you together as soon as possible'. We are ready to host the meeting at the level of heads of state," he said.

In the meantime, it is of great importance to ensure a temporary ceasefire, Erdogan said.

The Turkish president reiterated that his country would not join the international sanctions against Russia.

"While expressing our reaction to Russia's military activities, we also attach importance to maintaining our dialogue. This dialogue is important and necessary not only in the context of Ukraine but also in many geographies that are closely related to us, such as Syria, Libya and the South Caucasus," the president said.

Erdogan several times expressed his willingness to bring together Russian and Ukrainian leaders in Turkey for face-to-face talks.

Most recently, Turkey hosted a meeting of Russian and Ukrainian negotiation teams in Istanbul on Tuesday.

Ukrainian Foreign Minister Dmytro Kuleba and his Russian counterpart Sergei Lavrov met in a small resort town of Turkey's southern province of Antalya on March 10 on the sidelines of an international diplomacy forum, but failed to make progress on a ceasefire.