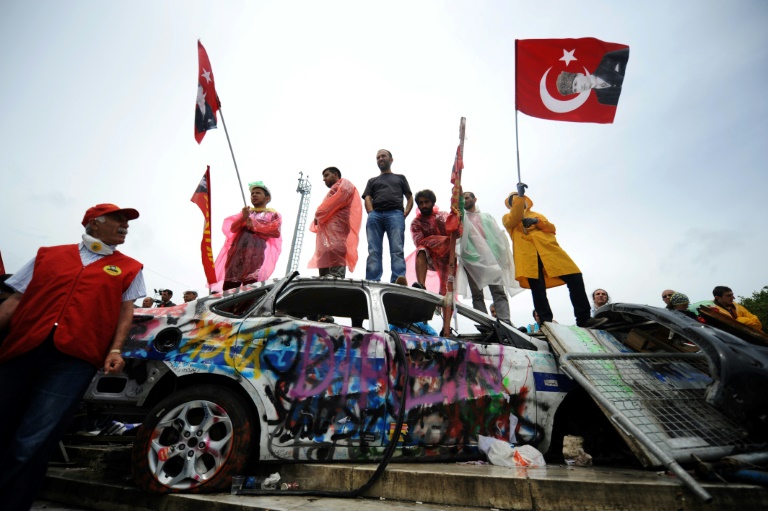 The protests began over government plans to build over Gezi Park, one of the few green spaces left in Istanbul. (Photo: AFP)

Sixteen leading Turkish civil society leaders appeared in court Monday, accused of seeking to overthrow the government during the "Gezi Park" protests of 2013, in a trial dubbed an absurd sham by critics.

The group includes renowned businessman and philanthropist Osman Kavala, whose detention since November 2017 has made him a symbol of what critics say is a crackdown on civil society.

Kavala rejected the "irrational claims which lack evidence" in his opening statement, shortly after the trial began under high security in the prison and court complex of Silivri on the outskirts of Istanbul.

He is accused of orchestrating and financing the protests which began over government plans to build over Gezi Park, one of the few green spaces left in Istanbul.

The protests snowballed into a nationwide movement that marked the first serious challenge to Erdogan's brand of Islamic conservatism and grandiose development projects.

The 657-page indictment seeks to paint the protests as a foreign-directed conspiracy with links to the Arab Spring, which, ironically, the Turkish government supported.

"None of these actions were coincidental... they were supported from the outside as an operation to bring the Turkish Republic to its knees," the indictment says.

Amnesty International's Andrew Gardner said the trial "speaks volumes about the deeply flawed judiciary that has allowed this political witch-hunt to take place.

"It is absurdly attempting to portray routine civil society activities as crimes," he said.

One of the allegations is the claim that a map on Kavala's phone showing bee species actually depicted his plans to redraw Turkey's borders.

A respected figure in intellectual circles, Kavala is chairman of the Anatolian Culture Foundation, which seeks to bridge ethnic and regional divides through art, including with neighbouring Armenia, with which Turkey has no diplomatic ties.

"I was involved in projects contributing to peace and reconciliation. There is not a single piece of evidence or proof in the indictment that I prepared the ground for a military coup," Kavala told the court.

Six of the suspects are being tried in absentia after fleeing Turkey, including actor Memet Ali Alabora and dissident journalist Can Dundar.

The case against Alabora focuses on his appearance in a play featuring a revolt against the ruler of a fictional country.

Others, including architect Mucella Yapici, have already been tried and acquitted for their role in the Gezi Park protests in 2015.

"I am on trial the second time on the same charges. Peaceful protests cannot be banned. They are a right," Yapici told the court on Monday.

Erdogan has linked Kavala to US billionaire George Soros, whose efforts to promote democracy around the world have made him a target for several authoritarian leaders.

Last year, Erdogan said Kavala was the representative in Turkey of the "famous Hungarian Jew Soros" whom he accused of trying to "divide and tear up nations".

"The charges in this case follow a political script that seeks to silence all critical voices in Turkey," said foundation president Patrick Gaspard in a statement.

"That they are now on trial, facing possible life sentences, is a tragedy."

There has been a renewed crackdown on dissidents since a coup attempt in 2016, blamed by the government on US-based Muslim preacher Fethullah Gulen, with thousands arrested and tens of thousands sacked from public sector, media and military jobs.